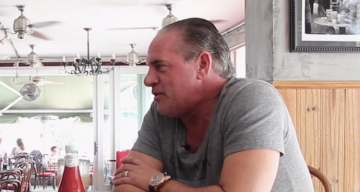 Michelle Pooch is living the life on Love & Hip Hop: Miami. She’s a jet-setting, hardworking DJ who seems to be traveling all over the place to rock crowds. But did you know that she used to be married? In this Tommy Pooch wiki, we will share everything that we know about Michelle Pooch’s ex-husband, and anything we could learn about Michelle Pooch’s divorce.

Tommy Pooch’s real name is Thomas Puccio. Originally from New York City, Brooklyn to be precise, his business career began as the owner of a pizza joint. But he always had higher aspirations. Pooch moved to Miami in 1992 and quickly set up shop as one of the best club promoters in the city. Word got around fast that if you wanted a great party, Pooch could get beautiful women and A-list celebrities. In a 1994 interview with the Miami New Times, he told the paper what his formula was:

“What you’re selling in the club business is sex. In Miami that’s even more true than other places. There are more beautiful women here per square mile than anywhere: fashion models, gorgeous Latin women, strippers, you name it. They go around with hardly anything on. It’s wild. And if you draw the women, the guys can’t stay away. The celebrities come too: the Stallones, DiCaprios, Nicholsons, Clooneys, and De Niros. You get them, then you’re golden.”

But being a promoter can often be a thankless job. You end up doing a huge amount of work and club owners end up reaping all of the benefits. To that end, Pooch got into other businesses. Tommy Pooch’s age is roughly 60, but he has shown no signs of slowing down when it comes to working. He went back to what got him his start and opened up a pizza place. Currently, there are three Pucci’s Pizza joints in the Miami area. He also got into real estate with T. Pooch Realty and, in 2014, entered the fine dining game by becoming a partner in the Midtown Miami location of Novecento.

Details about Pooch’s personal life are scarce —even when it comes to details about his marriage and subsequent divorce to Michelle. We do know that two worked together in the club promoting business and while they were married, they had a daughter named Bella, who is approximately 11 years old and has her own Instagram account. While he doesn’t post much on his Instagram, as of this writing, the last post on Tommy Pooch’s Instagram is a picture of his daughter.