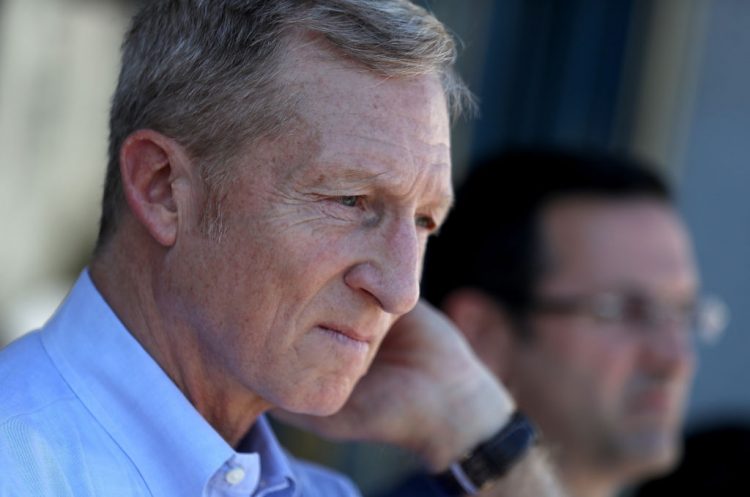 Tom Steyer may not be a household name yet, but soon, it most likely will be. Who is Tom Steyer? And, what’s going on between Tom Steyer and Donald Trump? In this Tom Steyer wiki, we’ll take a brief look at the man who is quickly becoming a thorn in the side of the current U.S. president.

Up until a little while ago, many people didn’t know the name, Tom Steyer. He’s a billionaire and has built his fortune through investments. But now, Steyer is waging a campaign against President Trump, and suddenly the world is taking notice.

Thomas Fahr Steyer was born on June 27, 1957, in New York City, New York. His father, Roy Steyer, was a partner at the law firm, Sullivan & Cromwell.

Tom Steyer was a good student and spent time at Buckley School, Phillips Exeter Academy, and then finally, Yale. While at Yale, Steyer got his B.A. and was captain of the soccer team.

Steyer then headed to Stamford Business School, where he received an M.B.A. At Stamford, Steyer became an Arjay Miller Scholar and later served on their board of trustees.

Steyer started his full-time working life with Goldman Sachs in their risk arbitrage division from 1983 to 1985. From there, he moved on to an executive committee position at Hellman & Friedman, a San Francisco-based private equity firm.

In January 1986, Steyer left Hellman & Friedman to start his own investment firm, Farallon Capital. It was while running his firm that Steyer would make his fortune. And by the time he left in October of 2012, the company he had built from nothing was managing approximately $20.0 billion.

The Environment and the Community

Tom Steyer’s net worth is sitting at approximately $1.61 billion. His story wasn’t really that interesting until he retired from the business world and headed into environmentalism to help the less fortunate.

Steyer contributed millions of dollars in creating projects and donating to charities that help the less fortunate, like the One PacificCoast Foundation. It assists disadvantaged communities by providing investments and lending support, as well as other services. Tom Steyer’s wife, Kat Taylor, is also actively involved in these projects.

When it comes to the environment, Steyer helped fund and launch the TomKat Ranch. The ranch’s primary goal is to help research and teach sustainable forms of agriculture. This was followed by the creation of NextGen Climate, an environmental advocacy non-profit organization.

#throwbackthursday to last weekend when NextGen America founder Tom Steyer made it clear "We are explicitly pro-choice." #istandwithpp #womensrightsarehumanrights #WeWontGoBack

Steyer sold off his stakes in companies that do environmental damage and continued to live a fairly low-key lifestyle. He doesn’t buy a lot of flashy trinkets, and rumor has it, he drives an older model hybrid. His life as an environmentalist has put Trump in his crosshairs.

During the last election, Steyer threw a lot of money around trying to prevent Trump from becoming president. He reportedly spent $75.0 million to help mobilize voters and hosted various functions to back Hillary Clinton.

Steyer spent approximately $90.0 million in the last election. He has since dedicated himself to trying to protect the environment from the various ideas and plans President Trump has that might affect it. This includes spending $10.0 million on a campaign to impeach Donald Trump.

The campaign has included typical things like posts on Tom Steyer’s Twitter and blog postings. But Steyer has also gone all out in other ways, like television ads during the World Series.

President Donald Trump has fired back on Twitter. So, this means the war is really about to begin!

Wacky & totally unhinged Tom Steyer, who has been fighting me and my Make America Great Again agenda from beginning, never wins elections!