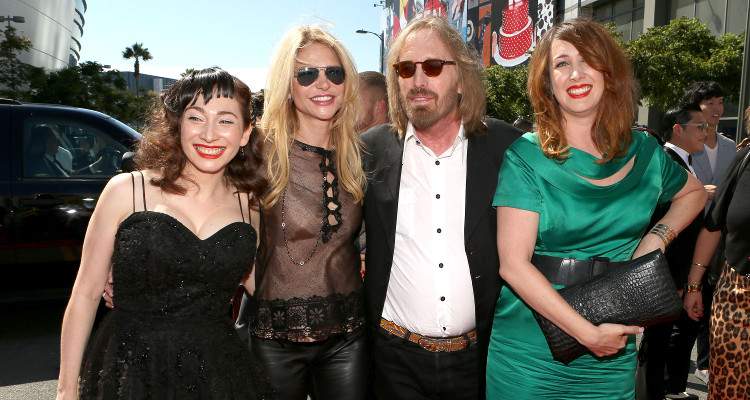 The world has lost yet another icon and beloved personality. Tom Petty said his final goodbye on October 2, 2017. He was rushed to UCLA Medical Center, after suffering a cardiac arrest, but passed away last night. With more than four decades of his legacy, he will live in our hearts forever. Here are some old and beautiful Tom Petty family pics to remember him by.

Tom Petty was a rock star who believed in something different. He wasn’t one to chase the expected, and his music touched the hearts of countless people. But now, the music industry and the world has a huge hole where Tom Petty was. It’s a sad time for fans and family alike, and if you are wondering who Tom Petty’s family is, then you are in the right place. Read on to know everything about Tom Petty’s family life and check out some of the rock star’s family pics.

Tom Petty and Jane Benyo dated as teenagers. Benyo is said to have told Stevie Nicks that they met “at the age of 17,” but the singer heard “the edge of 17,” thus inspiring her hit song. Benyo and Petty were childhood friends, and got married on March 31, 1974. The couple had two children together: Adria Petty and AnnaKim Violette Petty. They divorced in 1996, after being married for a solid 22 years.

Dana York, who was married to Tom Petty until his passing, met him at his concert five years before his divorce. Though nothing happened while he was still married to Benyo, the two got married in 2001. She had a son, Dylan, from a previous marriage, who was welcomed by his new stepdad.

Who Are Tom Petty’s Kids?

Tom Petty and Dana York do not have any children of their own, but their blended family is now mourning the loss of the iconic singer.

Adria Petty was born on November 28, 1974, and is now a film director, editor, and artist. She is the singer’s oldest daughter, and graduated from Tisch School of Arts. Her work led her to direct music videos for a lot of big names like Beyoncé, Coldplay, Kings of Leon, Regina Spektor, and a lot more. She also directed a film about Paris Hilton titled Paris, Not France, and was nominated for an MTV Video Music Award for her work on Beyoncé’s “Countdown,” Rihanna and Coldplay’s “Princess of China,” and Regina Spektor’s “All the Rowboats.”

AnnaKim Violette Petty is Petty and Benyo’s youngest daughter, and is an artist who believes in a different vision. It is very evident from her Instagram posts that she was extremely close to her father.

Nostalgia at Its Best

Tom Petty had rhythm in his soul and he touched millions of hearts with his songs. To remember his life, here are some of Tom Petty’s family pics:

An Artist Born to a Legend

We are all a mirror of divine love

I removed this post earlier in hope that this terrible news was a mistake. So sad to learn this great man really has beamed off this rock. #tompetty #musicalgenius #ilovehim #musicislife

We Will Never Forget His Warmth