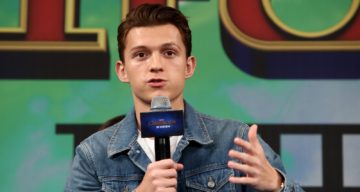 Only a few days after denying he’s dating his Spider-Man costar, Zendaya, Tom Holland has been spotted cozying up to a mystery blonde woman. The paparazzi snapped Holland in London holding hands with an unknown woman. The Internet obviously blew up with curiosity about Tom Holland’s girlfriend who is not Zendaya. Some sleuths have identified the mystery woman as one Olivia Bolton. Who is the Spider-Man: Far From Home star’s alleged girlfriend? Here’s what you need to know.

Less than a month after breaking TomDaya (That’s Tom-Zendaya, ICYMI) shippers’ hearts, Holland was seen around London’s Hyde Park with a woman identified as Olivia Bolton.

They reportedly attended the British Summer Time festival together that weekend. During a break from one of the concerts, they were photographed getting snacks and looked quite close to each other.

Not only was the pair holding hands on occasion, but Miss Bolton just went for it and touched Holland’s butt.

After these photographs hit cyberspace, people started to wonder if they are a couple. The Internet reacted in various ways—some were happy for Tom, some still want him to be with Zendaya.

But who exactly is this woman and what’s her relationship to Tom Holland?

Who Is Olivia Bolton?

So far, the only thing known about Olivia Bolton, besides her name, is that she has a sister, Grace. Grace Bolton is a student at Cardiff University in the U.K.

Olivia apparently had two Instagram accounts, and Grace has an Instagram, too. Both their pages are followed by Tom and his brothers, Sam and Harry.

With the sudden interest in Olivia and her family, she has become the target of nosy Internet bodies. She has since deleted one of her Instagram pages, and switched the other to private. 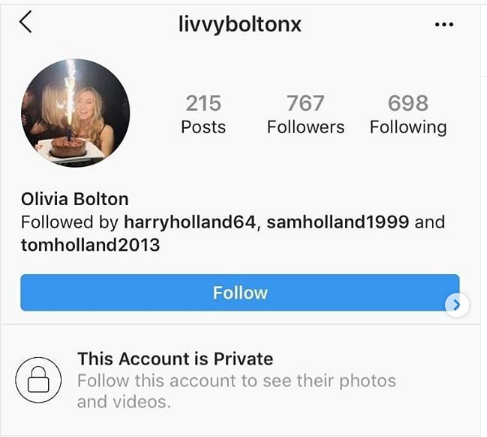 Grace also turned her Instagram private. Both sisters are also blocking accounts who are trying to dig up more information on them. 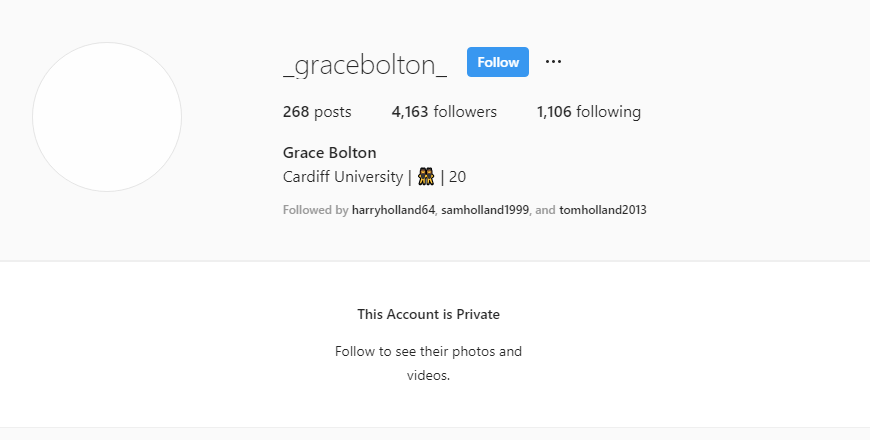 Additionally, some outlets have incorrectly identified Tom Holland’s alleged girlfriend as another Olivia Bolton. This other Olivia is a marketing and communications coordinator based in Wisconsin, already in a long-term relationship and with no connection with Holland.

Bolton and Holland Have Known Each Other Since They Were Kids

Some Internet detectives have discovered an old photograph of Tom Holland with his brothers and other kids. And Olivia Bolton is one of the kids in the photo.

The photograph indicates that Bolton has known the Holland brothers for years. In fact, a glance at Grace Bolton’s Facebook activity indicates that the Boltons and Hollands go way back.

We stan a long relationship

Those who have seen this childhood photo of Tom and Olivia wonder if they are childhood friends-turned-sweethearts.

But a good few think this could possibly be a family photo. There’s speculation that Bolton might be a cousin or another relative of the Holland brothers.

I mean could be possible but the pics looked like more than cousins but who knows he could have just been enjoying a night with cousins but still can we plz just support Tom in any decision he decides to make bc we aren’t his parents let’s just let him be happy❤️. ~ @spxdertom

Whatever the case, Olivia is facing unnecessary harassment online for allegedly dating Tom Holland. That’s why more sensible fans of Holland have urged others to be considerate of Olivia by not infringing on her privacy and waiting until Holland himself comments on the matter.