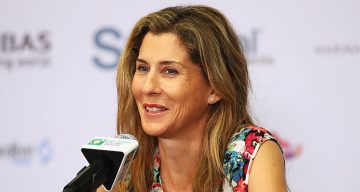 Former tennis star Monica Seles’ husband is seeking a discount on his property tax bill because of the constant goose poop he keeps finding on his law! Now, many are curious to know more about the famous athlete’s husband. All you need to know about him is right here, with details from Tom Golisano’s wiki.

Tom Golisano, age 76, is refusing to pay his property tax bill for his Upstate New York lake house because he is fed up of the seemingly never-ending bird droppings he keeps finding on his lawn! The Paychex founder believes that his bill should be discounted because of it.

Tom Golisano received a property tax bill in the amount of $90,000! He expressed his frustration by saying that he was tired of stringing up fishing lines, spraying repulsive goose repellant, and even posting a wolf decoy to deter the geese from defecating on his lawn. But nothing seems to be preventing the Canada geese from turning his lawn into a doo-doo park!

Golisano said, “The past summer it was horrible. We’d drive in and find 100 to 200 geese parked on our lawn.”

“You can’t walk barefoot, can’t play Frisbee, can’t have your grandchildren run around. … Here I am paying all this money in taxes and I can’t use my property because of the geese droppings,” the billionaire added.

Golisano believes this is a problem the government should be handling. But his one-man protest campaign is about more than issues with goose droppings.

Monica Sele’s husband is protesting a taxation system he believes is broken and inequitable. He plans to file a class-action lawsuit on behalf of other like-minded upstate homeowners, who also believe their taxes are far too high.

“A lot of people are suffering significant injustice because of the assessment system,” said Golisano.

Tom Golisano is the founding member of the New York Independence Party and three-time candidate for governor. He is also the former owner of the Buffalo Sabres hockey team.

Golisano is known for his generosity to health care, higher education, and to those with developmental and intellectual disabilities. With his wealth and generosity, he does not want his pocket picked by local tax assessors and the like. And, he has sued and confronted companies in the past for overcharging and taxing him too much.

Golisano has been divorced three times. He has two children named Steven and Cynthia Golisano with his ex-wife, Gloria Austin.

Monica Seles and Tom Golisano began courting in 2009. The story made headlines as Seles, 44, is nearly half of Golisano’s age.

The couple were seen out and about together, and the billionaire confirmed their relationship at the time by saying, “Monica and I are seeing each other.”

The couple announced their engagement on June 5, 2014 and the two are still happily together today.