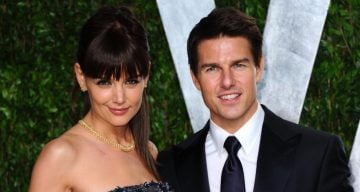 When it comes to the most recognizable names in Hollywood, there’s a good chance you’ll find Tom Cruise at the top of the list. Cruise was catapulted to movie star status after starring in the 1983 blockbuster Risky Business and 1986’s Top Gun. Many of his films have grossed hundreds of millions both domestically and internationally and he remains one of the industry’s highest-paid actors.

In 1987, Cruise married actress Mimi Rogers, who was actually seven years older than him. Their marriage lasted less than three years, but it was Rogers who actually introduced him to the world of Scientology—he’s now known as one of the most avid followers of the faith.

During their divorce proceedings, Cruise hooked up with his Days of Thunder co-star, Nicole Kidman and the pair quickly became Hollywood’s hottest power couple. Shortly after their 10-year anniversary, Cruise filed for divorce, reportedly without giving Kidman any advance warning. The actress publicly said that she was blindsided by the surprise split—she described it as a shock to her system, stating that it took her a long time to move on emotionally.

Meanwhile, Cruise dipped his toes in the sugar daddy pool when he began dating actress Penelope Cruz, who was 12 years younger than him. They called it quits in 2004. After their break-up, many media reports speculated that the Church of Scientology was holding secret “auditions” to find him a Scientologist wife, but Cruise maintained that this wasn’t true.

The following year, Cruise revealed that he was dating actress Katie Holmes—at the time, he was 42 and she was only 26. He famously declared his love for her by jumping on the couch during his interview on The Oprah Winfrey Show.

Holmes was raised Catholic but began studying Scientology shortly after her relationship with Cruise began. Their daughter, Suri, was born in April 2006, and the couple was married that November. Many reports suggested that Holmes was specially picked for Cruise by the Church of Scientology—they even had a Scientology wedding ceremony, with the Church’s leader standing as Cruise’s best man.

After five years of marriage, fans everywhere were shocked to hear news of another surprise divorce—but this time it was Holmes that unexpectedly left Cruise. After news of their split broke out, many reports suggested that Holmes had been plotting to leave for months before she actually did it. Sources close to the actress revealed that she feared her daughter would be subjected to scrupulous Scientology testing and that Suri would eventually be coerced into joining the cult-like faith. Holmes was also reportedly tired of being controlled by Cruise, and was afraid of being intimidated by the Church.

Cruise and Holmes reached a divorce settlement, with Holmes getting full custody of Suri, although Cruise has ample visitation rights. Holmes has since reportedly rejoined the Catholic faith.