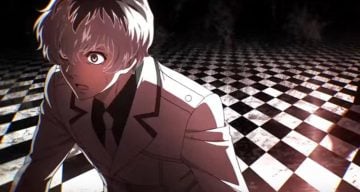 The Tokyo Ghoul:re Chapter 165 manga is about to go live soon. However, we’re still not over the events of the previous chapter! If you think nothing can top the revelation in chapter 164, you’ve got another thing coming. We’ve got Tokyo Ghoul:re chapter 165 spoilers and a recap of chapter 164.

In Tokyo Ghoul:re Chapter 164, the Commission of Counter Ghoul (CCG) team and us TG enthusiasts learned of the origins of the ghouls. A mysterious virus has been turning humans into Ghouls.

The monsters that the CCG are fighting suddenly explode, and the JGSDF (Japanese Ground Self-Defense Force) seems to be under the control of something. When the team hears Furuta broadcasting over a PA system, they know he’s behind it and dispatch people to nab him.

At Meiju Society Hospital, the medical team is helplessly watching patients ghoulify before their eyes. The Little Monsters that carry the ghoulification poison are born from the Oviduct.

Furuta explains his endgame where the Ghouls created by the Little Monsters will devour humans and carry the energy back to the Oviduct. The Oviduct will, in turn, use that energy to give birth to more Little Monsters.

Killing the Little Monsters releases their poison and makes more of them. This makes Furuta’s grand scheme an endless cycle of ghoulification.

Also Read: Find Out if Luffy Gets Rescued from Big Mom’s Pirates in One Piece 898.

Saiko Yonebayashi urges Ken Kaneki and Kuki Urie to head back to headquarters. But Kaneki is overwhelmed by emotion about wanting to protect his friends and unknowingly taps into his power.

Kaneki accidentally unleashes his power and kills the Little Monsters, clearing a path for all three of them. They make it to the hospital only to have bad news delivered.

Yonebayashi and Urie are infected by the poison and would turn into Ghouls without a cure. So far, their only hope is Kaneki, who possesses a degree of immunity against the poison.

Kaneki heads to the rooftop where he reunites with Hide for the first time in forever, something we’ve been waiting on for a long time. But Ken has no memory about their previous meeting.

If he did, he’d remember that his ghoulish side went out of control. Back then, he had woken up with no memory of what happened. The only thing Ken knew was that he had blood in his mouth after that meeting.

Now, both Ken and the readers know what he did to Hide that time.

As we all know, Hide covers half his face with a mask now. He plays it off with some jokes about makeup, but Kaneki is not having it.

Kaneki demands that Hide show him what he did. The latter doesn’t put up much of a fight and removes his mask.

For the first time, we see Hide’s mutilated jaw, lips, and gums. We deduce that Kaneki, in his ghoulish rampage, either ate or injured Hide brutally during their previous encounter.

Although Hide doesn’t seem to hold it against him, Kaneki is horrified by what he did.

At the end of the chapter, Kaneki vows he will make it up to Hide and the whole of Tokyo for the havoc he wreaked with his Kagune.

The Clowns Have Gathered

A Reddit thread has dished some incredible spoilers for the upcoming chapter that are going to blow your mind. The Clowns in their disconcerting Pierrot masks have arrived, according to the original chapter in Japanese.

For the uninitiated, the Clowns are a group of Ghouls sporting jokester-themed masks. These Clowns have a mysterious agenda and have been pulling strings in the background of every major event of the manga. And, we can only wonder what the Clowns have in mind in the next chapter.

Another mysterious group in this alternate reality, the V Agency, is facing off against the JGSDF. They are targeting humans, and in the course of it, destroying Tokyo, too.

Perhaps the biggest piece of suspense is the appearance of Kaneki’s Kagune dragon at the end of the chapter. If TG fans remember, Kaneki’s dragon form tends to be destructive.

We will only know what the appearance of Kaneki’s Kagune means when Tokyo Ghoul:re Chapter 165 goes live.