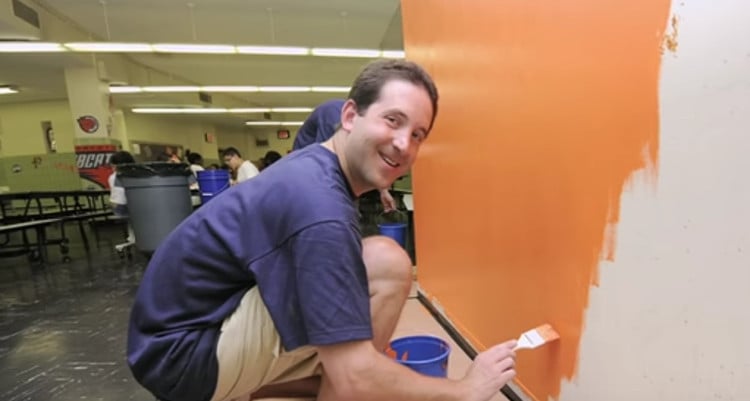 Todd Harris was an NBA executive and integral part of the league. He passed away suddenly on Tuesday (June 6) at the age of 47. Game 3 of the NBA Finals was played with heavy hearts after the tragic news was revealed.

The NBA has been buzzing now that we’re in the middle of the Finals. But the league is now shaken after being informed only moments before Game 3 was played that NBA executive, Todd Harris passed away. He was only 47. Warriors coach, Steve Kerr, who had taken a hiatus to recover from back problems, returned to the tragic news. Todd Harris’ cause of death is not yet known. Here’s more about him in our Todd Harris wiki.

Who Was Todd Harris?

Todd Harris was a native of Long Island. He grew up in the neighborhood of Woodmere and attended Hewlett High School before graduating from Syracuse University in 1991. Sports and broadcasting were his primary passions. In Syracuse, Harris worked at WJPZ and was the station’s sports director from 1990 to 1991.

According to his wife, his passion for sports came from him hometown in Long Island. “He was a Long Island boy, an Islanders fan and a Mets fan. He lived for the Islanders. He bled orange for Syracuse and orange and blue for the Mets and the Islanders,” she said.

After graduating from university, he worked for NBC Sports. That was the start of his career. He began working for the NBA in 1995 and was a part of the league for more than 20 years. NBC commentator, Mike Tirico was his friend in Syracuse and they attended the NCAA Final Four, among other basketball games together.

Committed to the League

Todd Harris devoted himself to the NBA and rose through the ranks until he became the vice president of the league. As many executives have said, it would be his name at the top of the emails containing the schedules of regular-season games, playoffs, and finals for the NBA, WNBA, and the NBA Development League.

He oversaw the broadcasting operations of the WNBA and was involved in the management of the NBA and its broadcasting partners. He also introduced the Mic’d Up segment in the NBA and WNBA, wherein coaches and players started using microphones for live broadcasts of national and local matches, and developed the WNBA Live Access (League Pass). The view inside the locker rooms during huddles has become an important aspect of sports broadcasting. Despite his many contributions to the NBA, his net worth has not been calculated.

How Did Todd Harris Die?

The tragic news of Harris’ death was announced by his wife, Jackie Harris, on his Facebook page. “It is with great sadness to inform you that Todd, an amazing husband and father to Mason and Logan, passed away suddenly yesterday, 6/6/17.” The cause of death hasn’t been specified at this time.

In an interview, Jackie Harris stated that family came first for Todd and that he was always there for his children. She further said that for him, the NBA was also his family and he felt lucky to have two families.

After the news of his death broke out, there has been an outpouring of grief and solace in all factions of the league. Warriors coach, Steve Kerr, started the pre-game media session with a heartfelt condolence to the Harris family.

Todd Harris was also a fixture in the broadcast offices and was close to many sports commentators. NBA commissioner Adam Silver released a statement saying, “His ability to cultivate strong relationships with our teams and broadcasters was unrivaled. Todd was dedicated, charismatic, funny and outgoing. Everyone who knew Todd would say he was one of their favorite people; he was definitely one of mine.”

ESPN commentators took to Twitter to express their sadness, while ESPN vice president of programming, Julie Sobieski, issued a statement saying Harris was “woven tightly into the very fabric of ESPN’s relationship with the NBA and WNBA. Todd always welcomed you with the brightest smile, a warm hug and a swap of stories about family. He was so proud of his children.” Harris’ close friend, Mike Tirico spoke about the times they went to games together.

He is survived by his wife Jackie, daughter Mason, 19, son Logan, 16, and his family dog, Tollhouse. Instead of flowers, his family has set up a Go Fund Me page to raise funds for the kids’ college education.