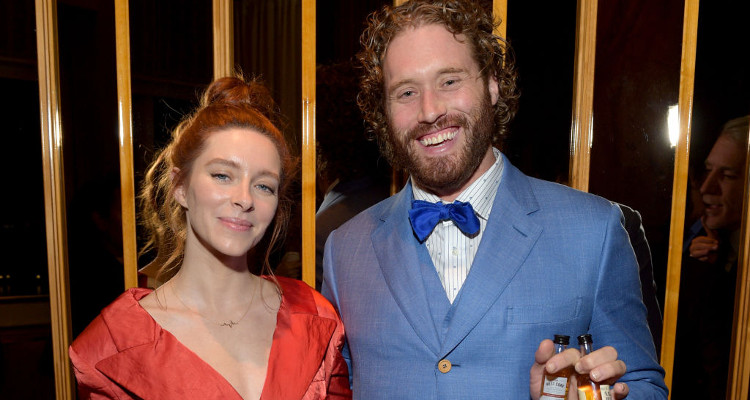 T.J. Miller certainly had his hands full this year! Not only did he have a new HBO special come out, he was also busy promoting some of the most anticipated movies of the year! But now people are wondering about TJ Miller and the sexual assault allegations made against him. People are also wondering about his wife, Kate Gorney, and if she’s sticking by his side. We’ve got all the information you need to know about her, right here in our Kate Gorney wiki.

T.J. Miller is talking politics and making people laugh in Meticulously Ridiculous, his stand-up special on HBO. After traveling around the world to promote The Emoji Movie, he’s creating quite a ruckus (and we mean it in a good way) with his beautiful wife on his arm. T.J. Miller and Kate Gorney are the picture-perfect couple. Here’s more about T.J. Miller’s wife in our Kate Gorney wiki.

#1. She Loves All Kinds of Art

Kathryn Titus Gorney is an amazingly talented artist. Under the pseudonym Rose Petal Pistol, she creates art and poetry. The daughter of a poet, Gorney grew up on a thoroughbred race horse and organic asparagus farm. Now a mixed media artist, she has traveled all over the world for her work.

Her passion for culture and arts led her to learn acting, dancing, and singing, along with language studies and equestrian training as a child. With training in classical ballet, her high school life was spent dancing as a member of the Ann Arbor Civic Ballet Company.

She studied in Europe and Scandinavia before enrolling in The George Washington University on a Women in Power Scholarship in the Women in the Arts program, where she earned her liberal arts degree with a concentration in Italian.

Just in case you need a dose of weird fashion from a mega nerd right now, check this article out (link in bio) – honored and humbled to be a part of @manrepeller , major hugs & major gratitude to the great @leandramedine & @halemur & the whole MR team #girlpower & come see my show in NY peeps #oncebroken

While we’re on the subject of Kate Gorney’s several talents, you should also know that she’s an actress, too! Though arts take up most of her time, she also does acting and modeling. Gorney was a model under mega talent management, FORD Models. Her acting credits include several short movies and stints, where she plays herself.

She had a few uncredited roles which include playing a barista several times on Gossip Girl. Her most recent work was in the short film, Smoke Gets in Your Eyes. She’s also a singer and composes her own songs. Her net worth hasn’t been calculated, but we’re sure she doesn’t lose out to her husband’s wealth of $4.0 million.

#3. Art Brought T.J. and Kate Together

How does a poet and artist of suffering/rebuilding meet a stand-up comedian who can sing and act? Through a musical production of course! Gorney and Miller were both students at George Washington University, where Miller was part of the comedy group.

They both starred in the university’s production of the ‘70s musical, A Chorus Line. They clicked and started dating shortly after. The rest, as they say, is history.

When it comes to proposals, there’s usually a good story behind how the question was popped and it was no different for Miller. Even becoming a “fiancé” was a struggle! Miller told Conan O’Brien on his show about how difficult it is to pronounce “fiancée” (we’re with you on that) and spoke about the colorful socks given to him by Gorney. He also shared their proposal story that “hurt so much.”

The Silicon Valley star took Gorney to the sculpture garden at the LA County Museum of Art, where the famous Levitated Mass (a giant rock art installation levitated above a pedestrian walkway) was being featured. He took her there because he felt his wife-to-be was “work of art.” So, what happened?

“What they don’t tell you,” Miller added, “is that when you get down on your knee to propose, just don’t do it so quickly. I went down fast, and it really hurt my knee.” Which means his knee came crashing down on a concrete floor. Yikes!

Fortunately, that didn’t kill the mood. In fact, Miller saved it with his humor adding a corny joke, “You’ve put me between a rock and a hard place, but Kate… will you…?” (Because the Levitated Mass is above and concrete floor… Get it?)

Gorney said yes and it was celebrated with her favorite truffle fries, balloons, and two cupcakes —one saying “Yes” and the other jokingly frosted with “No,” in case things didn’t go as planned. The man thought of everything!

The sweet absurdity of it all. So proud of this artistic genius & the artistic genius of my dear friends @jennileestylist @ambahhh & @chauntallewis for helping me shine on the outside. Extra kisses to @rodarte @dior & @ingechristopher ?? + #criticschoiceawards #support

#5. They Had an Art Deco Wedding

For the couple’s wedding in September 2015, they stuck to their whimsical nature. They had specialty cocktails —the bride’s signature drink was served in a squirt gun while the groom’s special was served in an old cologne bottle! A framed picture of Kate Gorney’s grandmothers was featured in her bouquet.

Besides sporting vintage earrings and having blue Swarovski crystals sewn into her dress, the couple exchanged vintage estate sapphire rings. The bride’s second look included an old-fashioned headpiece and a giant feathered collar.

The Silicon Valley actor is the latest to be accused of sexual assault, by a woman who knew him from college at George Washington University. The alleged accuser, whose identity has remained anonymous, first told The Daily Beast that the attack happened in 2001.

“He just tried a lot of things without asking me, and at no point asked me if I was all right,” the woman said.

She claimed that Miller choked her, punched her, and used a bottle to penetrate her. According to Rolling Stone, The Daily Beast supported parts of her story with classmates and associates of the college, which declined comment.

“We started to fool around, and very early in that, he put his hands around my throat and closed them, and I couldn’t breathe.”

In a statement, Miller and Gorney denied the claims writing, “[The accuser] began again to circulate rumors online once [my and Kate’s] relationship became public. Sadly she is now using the current climate to bandwagon and launch these false accusations again. It is unfortunate that she is choosing this route as it undermines the important movement to make women feel safe coming forward about legitimate claims against real known predators.”

The woman in question said she informed the school’s campus police a year later and told her “the issue had been resolved.” They did not provide further details on what that meant, but according to Daily Beast sources, Miller was “expelled after he graduated.”

Miller is the latest high-profile comedian to be accused of sexual assault, following Louis C.K., who later apologized and admitted that the accusations were, in fact, true.