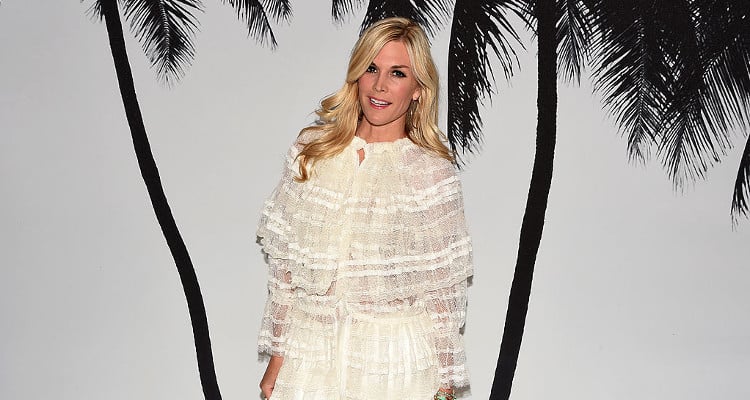 New year, new Real Housewife drama. The Real Housewives of New York is well underway and we’re getting to see some new faces. Tinsley Mortimer is new to the franchise but she’s an old face. This socialite has a net worth of $35.0 million.

The Real Housewives of New York are getting some new additions to their ranks. Tinsley Mortimer is set to join the ladies in season 9 and we’re excited. Why? Because she’s no stranger to reality TV! And when it comes to wealth, she’s well matched with Bethenny Frankel and Carole Radziwill. The socialite banks a sizeable net worth of $35.0 million. With her fair share of scandals, she fits right in with the ladies. Here’s more insight into her wealth and personal life in Tinsley Mortimer’s net worth.

How Rich is Tinsley Mortimer?

As we mentioned, the 41-year-old has amassed a net worth of $35.0 million. That’s much more than some of her castmates like Bethenny Frankel, Dorinda Medley, and Ramona Singer, making her a bonafide Real Housewife. How did she make all that money? Well, some of it is her own earnings and some is her inheritance.

Mortimer is a well-known socialite whose previous brushes with reality TV includes CW’s High Society. The series lasted only one season but we know what to expect from Mortimer in RHONY.

Mortimer comes from an impressive Virginia family and claims to be a descendant of Thomas Jefferson (yes, the Thomas Jefferson). Whether or not that’s true, she definitely comes from money. Her father is a real estate investor and her mother is an interior designer. On her own, she does pretty well with a handbag line, Samantha Thavasa by Tinsley Mortimer and clothing line, Riccimie.

She’s also an author, having worked on a couple of books and has an eponymous line of home essentials. Mortimer’s modeled for her handbag collection and also with other brands like Dior, who named their lip gloss Tinsley Pink after her.

Come by today if you are in Southampton! @kylebyalenetoo @pcpliving ??☀️

Who is the RHONY Newcomer?

The Southern belle had a distinguished upbringing. Mortimer attended the Lawrenceville School, where she was a member of the Kirby House. She went to University of North Carolina at Chapel Hill, before transferring to Columbia University. At Columbia she was a member of St Anthony Hall. She graduated with a bachelors in art history.

Tinsley met Robert Livingston “Topper” Mortimer in high school when she was a senior and he was a junior. Since she was set to leave for college, they eloped and got married at 18. But their parents forced them to annul their marriage and have a real ceremony when they were 26. She completed her degree in Columbia when her husband was accepted to New York University and she shared a luxurious apartment with him in the Upper East Side.

The Mortimer family comes from old money. Robert’s grandfather was president of Standard Oil of California. Robert himself earns big bucks working for a hedge fund. Since his family’s wealth goes back generations, it’s unlikely he’ll reveal his net worth. The couple didn’t have children but have had some relationship troubles.

The blue-blooded family was known to marry big as each spouse came from a distinguished family. Tinsley was no exception. But the glam girl grew up in Virginia and didn’t have the same gravitas in New York as her husband did, so she had to strive to establish herself in the NY social scene. Some of the couple’s tension arose from the family’s displeasure of how Tinsley used their name to further her status. In all fairness, she did use it to launch her fashion brand.

The couple eventually separated but Tinsley’s Instagram reveals they remain good friends. How their assets were split isn’t known, but she made sure her bank account is flush with her own career.

Just realized today is my anniversary. No longer married but still my great friend ?

After her divorce, the socialite had an on-again-off-again relationship with a man named Nico Fanjul, the son of a sugar baron also coming from money. Another aspect of their relationship; it was abusive. They had several run-ins with the law with police reports documenting Mortimer’s injuries. Mortimer was afraid of pressing charges fearing the family’s influence.

But Mortimer was more than just a victim. Once featured partying the night away, her mugshots became tabloid fodder. She spent most of her time in Palm Beach where Fanjul lived though, they broke up eventually. And then she was arrested for trespassing in Fanjul’s Palm Beach home when his girlfriend was there. Tinsley Mortimer had a tragic fall from grace following this incident.

She’s now moving on and getting back her “It Girl” image with RHONY. She came on the show thanks to her old friend, Sonja Morgan. “You lose yourself, you get so caught up in this thing and this other world and this life,” she says. “Being arrested saved my life, just giving me an opportunity to understand the good in my life.”

Let’s wait and watch what drama Tinsley Mortimer cooks up in Real Housewives of New York season 9 on Wednesdays at 9:00 p.m. EST on Bravo.