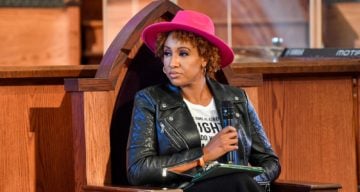 Nona Jones is a speaker, entrepreneur, author, and inspiration to millions. The Florida-based pioneer behind faith-based partnerships is also the First Lady of Open Door Ministries. Nona Jones and her husband, Pastor Timothy Jones Sr., lead the congregation based in Gainesville, Florida, together. Nona’s followers gain insight into their marriage through her social media posts and draw lessons on relationship dynamics from them. However, there’s very little known about who Nona Jones’ husband is or his background. So we reveal that in this Timothy Jones wiki.

Timothy Lael Jones Sr. was born on November 2, 1976, and hails from Florida. He is the son of Rev. Samuel Jones Jr., the founding pastor of Open Door Ministries.

Rev. Samuel founded Open Door Ministries over four decades ago in Gainesville, Florida. Tim Jones grew up in the same ministry he would later lead after his father.

The elder reverend is still a significant part of Open Door Ministries. The parishioners often rely on him for counseling.

Tim Jones graduated from the Warrington College of Business at the University of Florida, the same school wife Nona Jones is an alum of. Tim also pursued a doctorate in theology.

Tim had been part of Open Door Ministries for a long time. His father handed leadership over to him in 2015.

A month after Nona Jones graduated from the University of Florida with a bachelor’s degree in communication, she married Timothy Jones on June 19, 2004. She was 21 and Tim was 28.

The inspirational speaker often shares insight into their relationship on social media. In one Instagram post, Nona revealed that midway into their courtship, Tim dumped her for being too “argumentative.” It was Rev. Samuel who urged Tim to get back together with Nona, and four months after they rekindled their romance, Tim proposed.

The couple not only exemplify a healthy marriage and relationship, but are also inspirational as parents. Tim and Nona Jones are parents to two boys—Timothy Jr., aka TJ, (born 2010) and Isaac (born 2013).