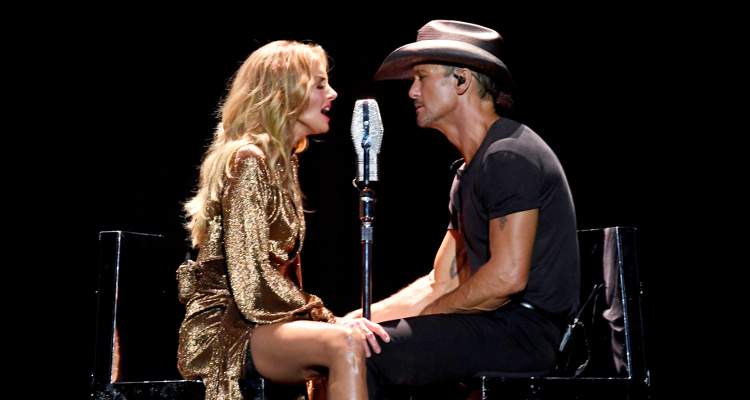 Tim McGraw and Faith Hill have been giving us major relationship goals since the 1990s, and there is no denying that at the 2017 CMAs, they brought the same affection on stage. The duo performed “The Rest of Our Life” and looked happy in love. Read all about their relationship right here.

How Did It Start?

Tim McGraw and Faith Hill have been married for 20 years now, and the couple looks more in love than ever before. Their famous love story and marriage need no introduction, but where did it all begin?

Well, Faith Hill (née Perry) was married to Daniel Hill in the late ‘80s. He was a music publishing executive and she was an aspiring singer.

Hill struggled to breakthrough as an artist. She worked odd jobs, sold t-shirts, and worked at a McDonald’s. But then, she found a job at a music publishing firm, and it was there that a co-worker heard Hill sing, and encouraged her to record a demo.

While a backup singer, a Warner Bros. Records executive liked Hill’s voice so much that he offered her a contract. A little while after her first album came out, she divorced her first husband in 1994.

At the time, Tim McGraw was already working on his second album and doing great as a country singer. His album, All I Want topped the country charts in 1995 and sold two million copies. By the next year, his tour was the most successful in country music history.

Hill did a supporting act on one of his tours. But at the time, she was engaged to Scott Hendricks, a producer. Was it love at first sight for Hill and McGraw?

Faith Hill broke off her engagement so that she could start dating Tim McGraw and the rest is history. The couple tied the knot on October 6, 1996, and have been together ever since.

Where it all started… Follow @Officialcmhof for more on our exhibit coming in November! #CMHOF50

The Duet of 2 Lovebirds

Tim McGraw and Faith Hill began recording duets and going on tour together. They soon had fans eating right out of their palms. The husband and wife team performing on stage as a couple worked like magic, and they became the most watched and  sought after couple in the country music scene.

This power couple have been entertaining fans worldwide since 2000. Their Soul2Soul Tour established their place among the most awaited tours in country music.

Everybody wanted to be like Tim McGraw and Faith Hill. The happy couple charged ahead together in their careers, as well as in their personal lives.

The couple sang hits including, “Like We Never Loved at All,” “Let’s Make Love,” and “Angry All the Time,” giving fans the kind of romantic songs they never heard before.

Most of their tours sold out, and records flew off shelves, putting this duo right on top of charts in country music.

They celebrated their 21st anniversary this October. They have three children: Gracie Katherine, 20, Maggie Elizabeth, 19, and Audrey Caroline, 15.

Faith Hill’s Instagram is full of performances with her husband. Occasionally, she’ll share pictures of her daughters, who are all grown up now.

Hill promoted the Soul2Soul Tour heavily on social media. And now, they are extending dates worldwide.

This girl, life of the party since she was born 20 years ago today!!!!! Happy Birthday Gracie. You light up every room you enter. We are so proud of you in every way. I feel blessed everyday to be your mom. I Love you.

The Soul2Soul Tour 2017 began in April in New Orleans and ended in Brooklyn. The couple are set to travel to the U.K., Ireland, and Scotland from March 2018 and return to North America for the tour’s second leg.

It which has grossed over $50.0 million already, and contains duets as well as solo performances by the Grammy-winning singers.

Tim McGraw and Faith Hill’s combined net worth is estimated to be $145.0 million.

With opening acts by Brothers Osborne, Brandy Clark, High Valley, and more, the concerts only prove how much fans still love Tim McGraw and Faith Hill on stage.

If you missed the couple this time, don’t forget to catch them in Richmond, Charleston, and Lexington in 2018, when they return to the road.