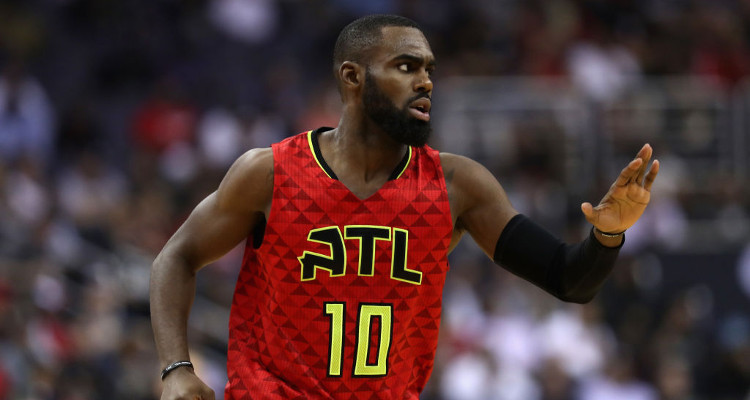 After a breakout season with the Atlanta Hawks, Tim Hardaway Jr. is in demand. The shooting guard could remain with his old team or join the New York Knicks for a bigger payday.

Tim Hardaway Jr. could be returning to his first team, the New York Knicks —that is if his current team, the Atlanta Hawks, put forward a better offer. The restricted free agent was a savior for the reviving Hawks, so they don’t want to lose him. But could the young NBA star have already made up his mind? A look at his performance in Tim Hardaway Jr.’s wiki right here will show why the Hawks and Knicks want this player.

A Legacy of Basketball

When we hear the name Tim Hardaway, we think of former NBA All-Star, Tim Hardaway, famous for the “UTEP two-step.” After more than two decades in the league, he retired and is now on the Detroit Pistons coaching team.Hardaway Sr. and his wife, Yolanda have two kids: Tim Jr. and Nia. Tim Hardaway Jr. is pushing his father’s legacy forward in the NBA.

The Florida native played football in his freshman year of high school when he switched to basketball. But focusing on the family sport led to a strain in the father-son relationship with Hardaway Sr. acting as his son’s second coach which worsened every time the younger Hardaway lost. His father was extremely critical which upset even the ladies of the house. Nia would come to tears when her father and brother had it out in the court of their palatial residence.

“I’m not going to sugarcoat it, he got on my nerve,” Hardaway Jr. said “… Just having that and my mom coming in trying to settle everything, it was hard for our family.” Eventually, Hardaway Sr. decided to observe his son playing a game one day. Without the coaching, yelling, and criticizing, he saw that his son was really good and he apologized for his behavior.

He Didn’t Get Many College Offers

For the son of Tim Hardaway, it was surprising to believe that there wasn’t a cue of recruiters wanting him. Hardaway Sr.’s tough coaching caused many recruiters to overlook the young player. Until Michigan coach, John Beilein noticed his potential.

Beilein sent a recruiter to check out the kid with the NBA dad in Florida. The recruiter, impressed, put forth Hardaway Jr.’s first college offer. He joined the University of Michigan and was starting lineup for the Wolverines that year and led the team to victory.

His game improved steadily and his efforts paid off when he was recruited to Team USA for the FIBA Under 19 World Championship. From falling off the radar and not being ranked by Rivals.com in high school, he became a Big-10 player in college and a top projected draft pick.

After his game improved and his relationship with his father was fixed, Hardaway Jr. declared for the 2013 NBA draft. He signed Mark Bartelstein, the father of his Michigan teammate and representative to major NBA players. With a strong draft stock, he was the 24th overall pick by the New York Knicks, a first round selection just like his father.

He wrote on Twitter he will wear jersey #5 which was his father’s number when he was a rookie. He sat out the summer league because of an injury but in the first preseason game against the Boston Celtics, he scored 16 points including the game-winning shot seconds before the buzzer sounded. He made his regular season debut in 2013 where he made a career high 21 points in two games.

He Asked His Girlfriend an Uncomfortable Question

Tim Hardaway Jr. is in a relationship with a woman named Kylie Bossie. Some time ago, Bossie was at the center of some speculation which prompted Hardaway to set the record straight. There was a rumor that former Knicks coach, Derek Fisher was dating Gloria Govan, Golden State Warrior Matt Barnes’s ex-wife. Somehow, Bossie’s name was also thrown into the mix.

While commenting on the Fisher-Govan rumor, ESPN reporter Brian Windhorst brought up that Fisher was linked to another player’s girlfriend. He said that Hardaway Jr. had to ask Bossie himself if she was cheating on him with Fisher. “I had a talk with my girlfriend. If you ask me, it is not true at all. I am completely positive with her judgment and what she said,” Hardaway said at that time.

Thank you @epichotel for the exceptional hospitality during NBA All Star break. I can't wait to return, but for now, back to the grind! #truetoatlanta

A Valuable Asset to Two Teams

When he made his professional debut with the Knicks, he signed a four-year contract worth $6.1 million. For the two seasons he played for the Knicks and the next two seasons with the Hawks, he earned around $1.0 million annually. His total career earnings amount to $6.0 million and he has a net worth of $3.0 million.

At the end of the season, Hardaway Jr. became a restricted free agent giving the Hawks to match any offer he signs. His old team offered him an upgrade of $71.0 million for four years. Now, Atlanta has until Saturday to match the Knicks’ offer or they lose Hardaway Jr. Either way, it’s a win-win for Tim Hardaway Jr.