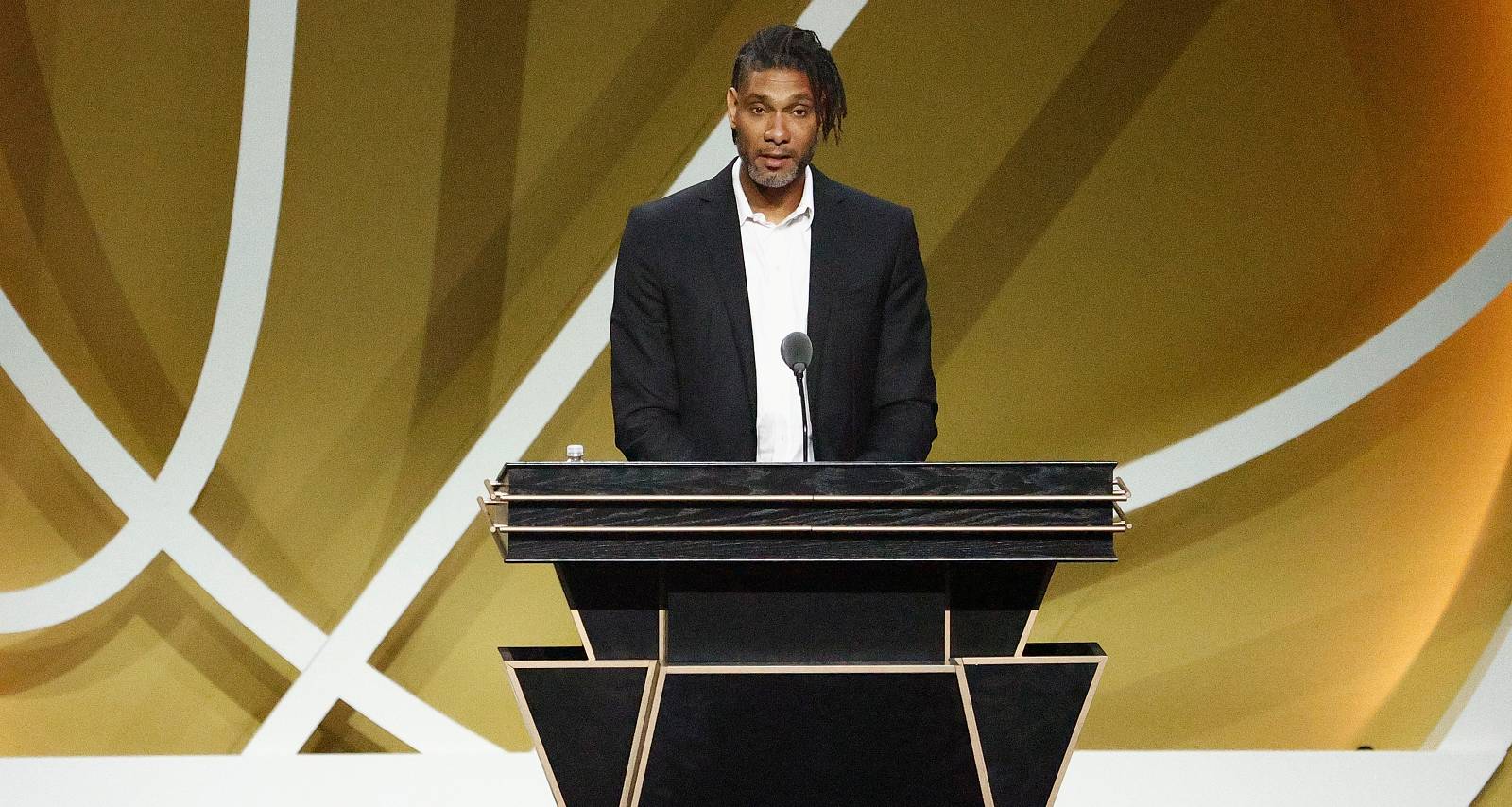 Class of 2020 inductee, Tim Duncan speaks on-stage during the 2021 Basketball Hall of Fame Enshrinement Ceremony at Mohegan Sun Arena on May 15, 2021 in Uncasville, Connecticut. (Photo by Maddie Meyer/Getty Images)

He is known as the humble giant, or as he is referred to by Shaquille O’Neal, the big fundamental. Because of his nature, not many people ask, “How rich is Tim Duncan?”

But the Tim Duncan net worth is actually substantial at $150.0 million.

And how old is Tim Duncan as he amasses his wealth? Just 40 years old—that is ancient for an NBA athlete, but still relatively young for us commoners. Nevertheless, Duncan’s career achievements show that he’s earned every dime.

Tim Duncan Net Worth Compared to Other NBA Players

Tim Duncan has enjoyed a long career full of achievements. He has played his entire career with the San Antonio Spurs, a feat which is odd in today’s sports where free agents usually jump teams hoping to land big contracts or looking for winning environments. But Duncan has been anything but normal since he was drafted in 1997. He came into the league and immediately made an impact, helping the Spurs become one of the most dominant franchises over the last two decades.

Duncan was actually born in the Virgin Islands. His first love was swimming before a violent hurricane followed by the death of his mother pushed him to basketball in the ninth grade. That turned out to be a wise decision as Duncan would earn a full scholarship to Wake Forest University. There Duncan would earn several awards, including the John Wooden award for player of the year in college basketball.

Many NBA experts say that Tim Duncan is the best power forward to ever play the game. That would make him one of the greatest players ever—and who can really argue. Tim Duncan’s stats speak for themselves. In his very first season, Duncan averaged over 21 points and 11 rebounds. Those numbers would earn him the title of Rookie of the Year and stamp him as a force to be reckoned with.

The very next year, together with teammate and hall-of-fame member David Robinson, Duncan led the San Antonio Spurs to the franchise’s first ever NBA championship. Duncan was named finals MVP after dominating the series, averaging 27 points and 14 rebounds as the Spurs defeated the New York Knicks.

Duncan would go on to win four more championships: in 2003, 2005, 2007, and with his last championship against LeBron James being in 2014. Duncan would handle all of this with surprising grace. Never one to boast or be arrogant either on or off the court, he always let his achievements speak for itself.

Breakdown of the Tim Duncan Net Worth

Tim Duncan’s contract right now is in the range of $10.0 million per season making Tim Duncan’s salary an impressive one. Though he has been a superstar in the NBA for so many years, he often took slightly less money so the Spurs could sign other top-tier players. He still managed to earn over $200.0 million in contracts over the course of his NBA career, but that amount could have been substantially more should he have asked for the max dollars he more than deserved.

But that’s good old Timmy: always thinking about the team first. And though there were years when he did make over $20.0 million per season, his willingness to negotiate is another reason he is so highly regarded as a teammate and as an asset to the game itself.

His laid-back demeanor also means he isn’t looking to be in front of the camera for endorsements. Forbes put him as making just $2.0 million in endorsements back in 2013, the year before he won his last championship. He does have a shoe deal with Adidas, but that’s his most notable off-court deal.

Tim Duncan married his ex-wife Amy back in 2001. They were college sweethearts and have two children. The family lived together in their Texas house until 2013 when the couple divorced. Duncan started the Tim Duncan Foundation, of which Amy is the head, to promote health, recreation, and education among youth in the San Antonio area along with St. Croix.

To date, Duncan’s foundation has raised over $650,000 for his cause. The NBA has recognized Tim as one of its players that has consistently given back to his community. In 2001, he was presented with the Team Community Service Award by the NBA. Even as Tim Duncan’s day on the court is coming to an end, he still will have a deep impact on these communities.

One thing people may not immediately know about Duncan is that he loves cars. Tim Duncan’s car collection is actually pretty serious, with a 1966 Chevy and 1950 Mercury in the mix. For someone who is not flashy at all, this is probably a bit shocking.