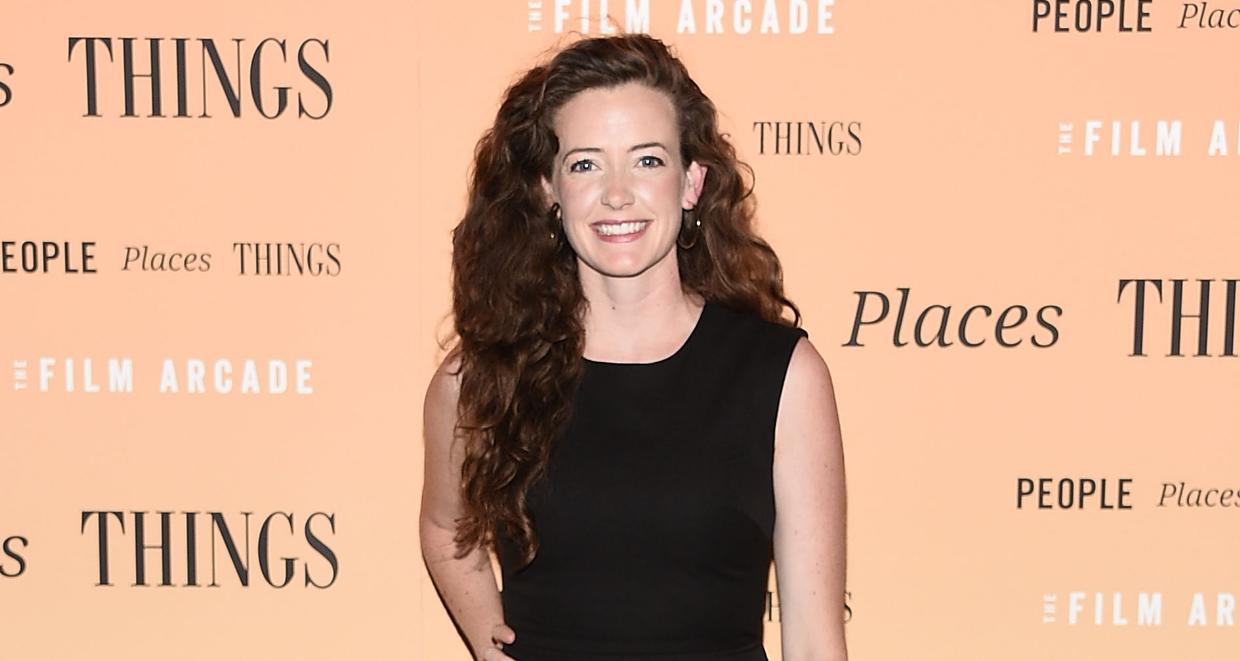 Be it in TV series, films, or theater, Stephanie Allynne has had a successful career in acting. But her greatest joy comes from being connected and close to her family, especially her wife. She is married to comedian, actress, and writer Tig Notaro, and the women have twin sons born through surrogacy. Now, Allynne is taking bold steps as a writer, proving that in the end, sheer talent triumphs all glass ceilings.

Stephanie Allynne and Tig Notaro have bagged a big project with Netflix. The ladies are the writers of streaming giant’s new film titled First Ladies. It will star Jennifer Aniston as the President of the United States and Notaro as the First Lady.

The subject matter of the film is straight up Allynne’s alley. It is a political comedy about America’s first female president and her wife. So, who is Stephanie Allynne?

Allynne is Tig Notaro’s wife. The two women have been in a lesbian relationship for years now, and have naturally become two of America’s celebrity sweethearts. People love them, and it’s easy to see why.

Stephanie Allynne is an American actress who has acted in several films and TV series over the years. But lately, she has also been dabbling in writing.

She is known for her work on the sketch comedy series, Wild Horses and of course, alongside her wife in the Amazon hit series, One Mississippi. She’s also been seen in films including Gregory Go Boom and People Places Things.

If you want to know more about Tig Notaro’s wife, our Stephanie Allynne wiki has everything you need.

A Love for Theater

She was born on September 19, 1986, in Southern California, which means that Stephanie Allynne’s age is 31. She later moved to Buffalo, New York, where she began her career in showbiz.

Allynne started out by working on theater productions. She then became a house performer at the Upright Citizens Brigade Theater.

She has performed regularly on improv shows like ASSSSCAT, Last Day of School, and Wild Horses, in addition to her own show, Urban Adjacent.

In fact, Urban Adjacent proved to be so popular with the UCB Theater that it’s run time was increased. She also took part in the play Library Cards and her role was co-authored by Zoe Jarman.

In 2012, Allynne went on a national tour with Drew Carey for the sketch comedy, The Midnight Show. She also toured the U.S. as a part of Mr. Show (An Evening with Bob and David, and Posehn) in 2013.

Allynne began getting regular work on TV, and she appeared in several TV series like Happy Endings, The Birthday Boys, Maron, The Mindy Project, Kroll Show, 2 Broke Girls, and Up All Night. She pushed the envelope with her roles in the Adult Swim show, Dream Corp LLC as well as Twin Peaks on Showtime.

After gaining confidence due to her stint on television, Allynne started working in films as well. She appeared in movies like K.I.T., In a World, and the SXSW official short film selection, Donald and Jess.

While Allynne is sentimental about all her work, she is especially proud of her films, In a World, K.I.T., People Places Things, Gregory Go Boom, and the documentary, Tig, all of which premiered at the prestigious Sundance Film Festival.

It is through her work that she met her future wife, Tig Notaro, a stand-up comedian, writer, and actress.

The duo met on the set of the film, In a World, and started dating. After a while, they realized that they were meant for each other and decided to get married.

A Wedding to Remember

The wedding was a momentous event for both Allynne and Notaro, as the two sweethearts continue to shatter glass ceilings inside and outside of their careers.

"Ohhh still crazy after both these years" ? happy 2nd anniversary to the love of my life. ✨

Welcome Additions to the Family

Then, on June 26, 2016, the couple welcomed their twin boys, whom they named Max and Finn Notaro. The two boys were conceived via surrogacy using Allynne’s eggs, making their little family complete in all respects.

Allynne simply loves her boys to no end. So, it’s no wonder that her Instagram account is full of pictures of Max and Finn.

The actress also got the opportunity to work with her wife on the series, One Mississippi, where she played a radio producer and the love interest of Notaro. She even tried her hand at writing and wrote several episodes of the series.

In 2015, Allynne said about her relationship with Notaro, “I had not dated women before, and I think when we first started spending time with each other, I was so into Tig and I was falling in love with her and I didn’t know how to identify it because I thought I was straight.” The two are the epitomy of happiness, and it shows. All aspects of both their lives are flourishing, be it love, career, or family.

Standing Up for Her Beliefs

Even though Allynne has not been overtly political in her life so far, she has stood up for the issues that she believes in—like same-sex relationships and same-sex marriage. An excellent example of her creative activism is her work on the forthcoming Netflix film, First Ladies, where she has co-written the script.

Stephanie Allynne’s Instagram account shows how much passion she has for her work, especially theater and comedy. There are many posters of Wild Horses, Largo on the Coronet, and Wild Horses: The Podcast.

You can also see many pics of her posing with her colleagues and Notaro, as well as plenty of solo shots of Allynne. It easy to see her top priorities in life; her wife, her boys, and her work!

Allynne currently resides in Los Angeles, California, along with Tig Notaro and their two sons. She seems to be busier than ever in both her professional and personal life, with multiple projects going on and having to take care of two kids back home. Her wife is also soaring in success at the moment, but the two seem to be handling life just fine.

Again, these two are just proving that behind every great woman’s success is another strong woman!