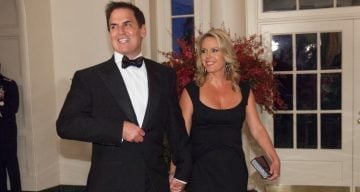 After Democratic nominee, Hillary Clinton announced that she would be inviting billionaire businessman, Mark Cuban to tonight’s debate, everyone had to know more about him. But who is Tiffany Stewart? If you haven’t guessed it by now—Tiffany Stewart is Mark Cuban’s wife.

Before seeing the debate tonight, people have been searching for Mark Cuban’s net worth, Mark Cuban’s kids and are looking for any information they can find on all things Mark Cuban and Tiffany Stewart related. So, in order to make your search easier, here is everything you need to know about Tiffany Stewart, ahead of the final presidential debate.

She’s Younger Than Him

Before Stewart and Cuban exchanged vows in front of their loved ones, they first met at a gym in Dallas, Texas. At the time Stewart was working as a salesperson at an advertisement agency and Cuban was busy being a billionaire, owning everything he could get his hands on. After three years of dating and many wondering will-they-or-won’t-they, Cuban and Stewart finally got married on a destination wedding in Barbados. The ceremony took place in front of 20 guests, which consisted of close family and friends. (How else do you expect a worldly billionaire and advertisement executive to get married?)

Cuban is the owner of NBA’s Dallas Mavericks, Landmark Cinemas, Magnolia Pictures, and HDTV cable network, AXS TV. He has also been a “shark” on ABC’s hit business show, Shark Tank, since 2003. Cuban’s net worth is approximated at a hefty $3.0 billion!

It’s Not About the Money

For those who think the strawberry blonde is just another gold-digging trophy wife—you are sadly mistaken. While they were dating, Stewart found it hard to live in Cuban’s chateau (which is French for “a very expensive house”) and reportedly questioned his spending habits. She found it hard to spend any real time with him and often wouldn’t know when he slept. His computer was always on and managing their personal lives and schedules was difficult. Stewart even continued to drive her Honda while they were dating! She didn’t like coming home to their big chateau, but it’s possible that she’s gotten used to their lavish lifestyle.

If you look up Mark Cuban and Tiffany Stewart, you will not only find information on them and their political connections, but information on their children, as well. Cuban and Stewart have three kids: Alexis, Alyssa, and Jake. You would think that they were raised by the best nannies from across the globe, but it turns out that Cuban and Stewart are very involved with parenting their kids themselves, according to Business Insider.

“We have a nanny,” he says. “Unless it’s the night of a Mavs game and Tiff and I are going to a game, then they’re out by 6 or 7 and then it’s real world. On the weekends we have someone in the morning so Tiff and I go workout Saturday mornings. Then the rest of the weekend it’s just us. It’s us putting them to bed. It’s us at dinner. We try to be as normal as possible.”