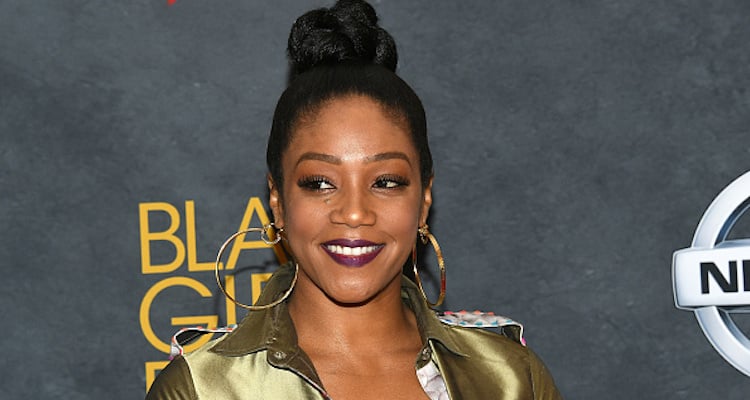 2018 just started and Tiffany Haddish is already having a rather good year. She just won an NAACP Image award for her role in Girls Trip. A story she told on Jimmy Kimmel ended up getting her a job as the spokesperson for Groupon. Not a bad start, if you ask us! But who is Tiffany Haddish? What’s her story? In this Tiffany Haddish wiki, we’ll examine her background, how she got into comedy, and even a little bit about her Groupon story. We have everything you ever wanted to know about Tiffany Haddish in one convenient article. Let’s get started, shall we?

Born in Los Angles, California, on December 3, 1979, Tiffany Haddish’s age is 38. Her father came to the United States as a refugee from the African country of Eritrea, which has a horrible human rights record. Her mother was an African-American small business owner. Her father left when she was three years old, and her mother remarried, causing a shift in Haddish’s life.

Haddish’s stepfather tampered with the brakes of her mother’s car. She and her four half-siblings were supposed to go with her mother ,but decided to stay home. Their mother got into an accident and went straight through the windshield. The resulting head injuries caused brain damage and possibly triggered the onset of schizophrenia. After taking care of her brothers and sisters for three years, Haddish and her siblings were placed into foster care until Haddish was 15, and her grandmother brought them all together again.

The Path to Comedy

A result of being in the foster system, as well as the changing situations and schools that often go with it, Tiffany Haddish began using humor as a way to fit in. After repeatedly getting in trouble at high school, she was given a choice: Go into therapy or a Laugh Factory Comedy Camp. She chose the latter and it changed her life.

With the help of other comedians, she developed and honed her act, which led to being able to perform all over North America. As a result, she gives back by volunteering at the same Laugh Factory Comedy Camp that showed her a new path.

Comedy gave her a lot, and it keeps giving. Haddish appeared on Jimmy Kimmel Live! and told a hilarious story about using popular coupon site, Groupon to take a swamp tour with Jada Pinkett Smith and Will Smith. This story resulted in Haddish getting a job with Groupon as their spokesperson. Through her work, Tiffany Haddish’s net worth is now an estimated $2.0 million.

Wassup, yaw!!! So excited to announce that I’m the new spokesperson for Groupon! Can you believe it? So stay tuned for some exciting stuff ahead. #SaveLikeTiffany #ad

In her memoir, The Last Black Unicorn, she alleges that there were occasions where Haddish’s ex-husband, William Stewart, physically attacked her. She filed for divorce in 2011 but took Stewart back. She then filed for divorce one last time in 2013. The couple have no children.

In terms of social media, Haddish maintains an active presence on Twitter, Facebook, and Instagram. Tiffany Haddish’s Instagram takes a look at her personal life as she often posts photos not only of her attending premieres and hanging out with famous people, but also features pics of the star partying with her family, posing with fans, and the backstages of comedy clubs across the country.