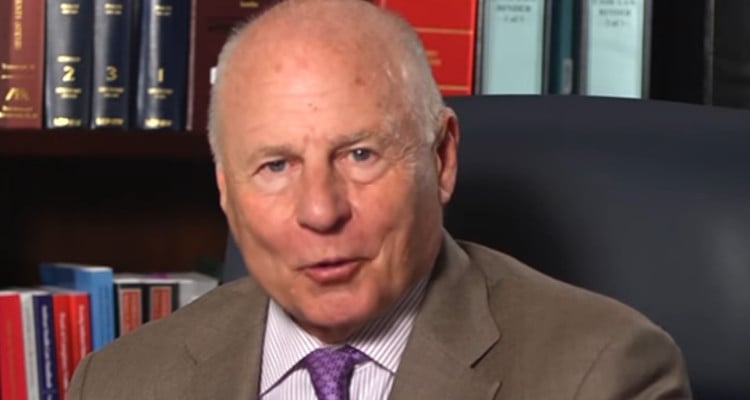 It looks like all eyes are on Erika Jayne’s husband after she mentioned him in her tell-all memoir, Pretty Mess. What did the Real Housewives of Beverly Hills star have to say about her husband? We have what you need to know, including information on his net worth of $30.0 million!

Fans don’t get to see much Erika Jayne’s husband. But she makes a notable mention of the high-powered attorney in her book, Pretty Mess. So, who is he?  Our Thomas Girardi wiki has all the details you need, including information on his net worth, family, house, wife, and more.

Who Is Thomas Girardi?

Thomas “Tom” Vincent Girardi was born on June 3, 1939, in Denver, Colorado. Although Girardi’s age is 78 (turning 79), he’s still practicing law to this day!

Before becoming a partner at his own Los Angeles firm, Girardi & Keese, Girardi got his start by building his own practice and relying on friendship.

“Initially I relied on friends who were a couple of years ahead of me who would send me cases,” Girardi told Attorney at Law Magazine.

Girardi added, “Every once in a while criminal defense attorney, Bob Courtney, would get a dog bite or slip-and-fall case and would send those to me. George Lowrey was a big divorce lawyer down there and every once in a while he’d come across an auto accident case and send it to me. This is how I built my early practice.”

Girardi is known as one of the toughest lawyers to go up against in any case. He’s regarded as one of the nation’s top attorneys, according to his firm’s website.

Thomas Girardi’s net worth is now estimated at a whopping $30.0 million, which is much higher than when he started out, thanks to high profile cases and an amazing winning streak!

In 1970, Girardi was the first attorney in California to win more than $1.0 million for a malpractice case and has had more than 100 settlements. It’s no wonder his name is on the door first!

His Case was in Erin Brockovich

Not only was one his most prominent cases featured in the movie that won Julia Roberts an Academy Award, but he also got to see the actress daily!

For the 2000 movie based on a true story, Girardi acted as a consultant for his real-life role in the lawsuit against Pacific Gas & Electric. His character in the movie was named Kurt Potter (played by Peter Coyote).

Fun fact: Girardi was influenced to become a lawyer, thanks to actor Raymond Burr’s role as Perry Mason, a TV attorney.

During a pit stop on The Wendy Williams Show, the Dancing With the Stars alum confirmed that she does spend up to $40,000 a month on her appearance!

“If you want to look good it’s hair, it’s makeup, it’s wardrobe, and then those people that help facilitate that. They’re not cheap,” Jayne said to Williams, via People.

That wasn’t all Jayne revealed in her book. The Real Housewives star revealed that her husband of almost 20 years, doesn’t wear a wedding ring. Why, you ask?

He’s never been fond of them!

“After our engagement, Tom said, ‘Listen, I’ll buy you anything you want. I don’t care what it is. You name it. But I’m not wearing a wedding band. I never have, I never will. I don’t like it. It’s uncomfortable. Please don’t ask me to.’”

Jayne is Girardi’s third wife, and the two live in their lavish house in Los Angeles.

The couple doesn’t have children together. However, Thomas Girardi is a stepfather to Erika Jayne’s son, Tommy Zizzo.

Don’t they make one happy (and rich) family?