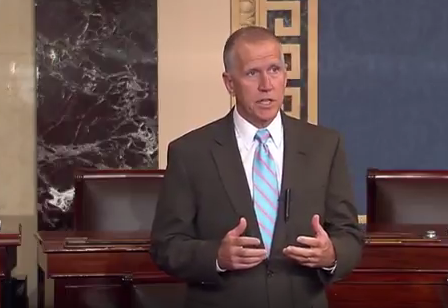 North Carolina Senator Thom Tillis collapsed on Wednesday and people want to know why. Who is Thom Tillis, you ask? He may not be as well-known as the president, but he is known by those on Capitol Hill. If you’re into politics and want to learn more, then have a closer look at our very own Thom Tillis wiki.

Thom Tillis, North Carolina’s senator, was born on August 30, 1960 in Jacksonville, Florida and is 56 years old. Tillis was born into a working-class family raised by his mother and father and grew up with five other siblings. Throughout his childhood years, Tillis would move around often, depending on where his parents could find employment. After graduating from high school, he couldn’t afford to go to college, so he took a job as a clerk and worked in a warehouse for minimum wage. He later went to school at night while he worked during the day.

According to his senator profile, Tillis climbed the corporate later through hard work and dedication and earned his tech management degree at 36, and he was also a top-level executive at PricewaterhouseCoopers and IBM. Tillis’ 22-year private sector career in technology made him uniquely qualified to understand policy- making and the understanding of difficult organizations. Thom Tillis’ party is Republican and he was elected into the state House in North Carolina in 2006, and became a speaker in 2011. Thom Tillis’ office headquarters is located in North Carolina and he is “committed to preserving the American Dream for younger generations.”

Is Thom Tillis injured? His constituents will be happy to know that the Republican Senator is “fine” and ready to get back to work on the Hill. The senator fell at charity race in Washington, D.C. ‘s Anacostia Park, which started at 8:00 a.m. Many prominent figures such as senators, judges and members of the media took part in the race. Tillis was the captain of his team (Team Tillis) for the A.C.L.I. Capital Challenge Three Mile Team Race, but fell due to exhaustion and said that he was “overheated.” Speaking out of what appeared to be a hospital bed, Tillis sent out a short video online, telling everyone that he was fine, as well as a tweet.

According to Thom’s political website,Thom lives in Huntersville with his wife Susan, and they have two adult children together. The family keeps their personal lives private for the most part, so not much else is known about them or their children.

He Served on Several Committees

According to his profile, Tillis serves on several committees to help benefit the American people.