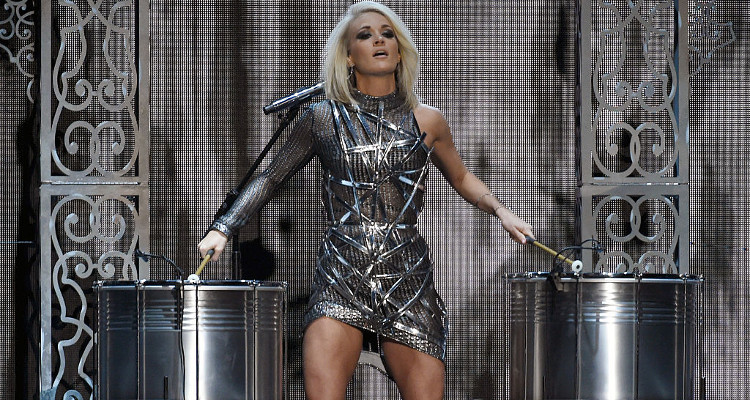 Since winning the fourth season of American Idol in 2005, Carrie Underwood has become a lot of things, including a singer, a songwriter, an actress, and a wife. More recently, she took on the new role of mother in early 2015, giving birth to young Isaiah Michael Fisher. And thanks to her little bundle of joy, she can now take on yet another role: “Mouseketeer!”

The star posted an adorable photo to Instagram of Isaiah sitting on the floor, surrounded by his toys and wearing cute green jammies with pictures of dinosaurs on them. You can only see him from the back, but it’s clear that his eyes are glued on the TV, which is showing Disney’s Mickey Mouse Clubhouse, an animated series for preschoolers. And the little one wasn’t alone on the floor! “I used to watch the news in the mornings,” his mom wrote. “Now I sit [on] the floor with my cup of coffee and this munchkin and sing the ‘Hot Dog’ song! I think I like it better this way!” The hashtags “whodathought” and “bestwaytostarttheday” show that Carrie Underwood has no problem with a little discomfort from sitting on the floor if it means spending time with her son. Plus, it’s probably nice to have the downtime from her busy work schedule.

Underwood’s post has received over 135,000 likes so far, and many fans with small children empathized; apparently the “Hot Dong” song is very catchy, with one fan commenting, “This song is forever stuck in my head!” and another adding, “Oh geez….thanks for the earworm Carrie.” It’s almost surprising how many people had a similar morning ritual with their children, not that that stopped people from appreciating what a doting mother Carrie Underwood is, with comments such as, “You’re such a good mom! I look up to you tremendously,” and, “I love seeing you as a mom, it’s the cutest!” Hopefully we’ll see more pics of Carrie Underwood with young Isaiah in the future!