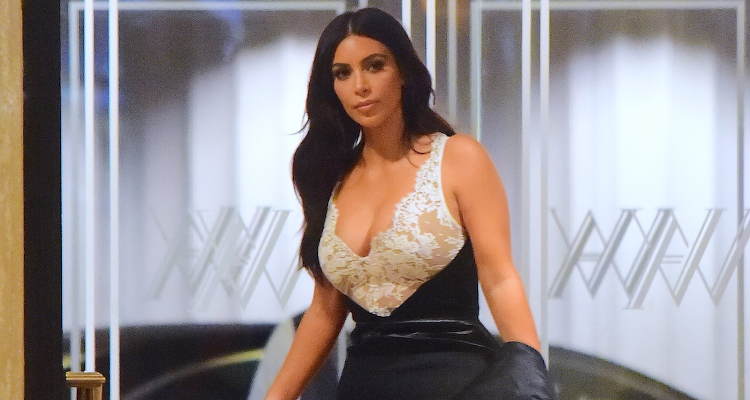 Like Every celebrity mommy, even Kim Kardashian has been trying hard to shed off her post delivery weight. Recently, Kim was featured in Fergie’s new song “M.I.L.F. $” music video. Kim looked incredibly fit and toned in the video, which got fans wondering if it was photoshop or has she actually lost weight?

The Kim Kardashian weight loss story has inspired mothers all over the world to quit cribbing and start working out in order to get that perfect body. Kim Kardashian gave birth to Saint West on December 5, 2015 and since then we have seen her layering herself up in loose fitted jackets, probably to hide the added baby weight she gained during her pregnancy. In fact, in Keeping Up With the Kardashians, we noticed that she mentioned (quite a few times) that she needs to start working out to get that perfect body.

Many sources have revealed that Kim has lost over 7 pounds in just two weeks. She is planning to reduce her weight to 120 pounds, and she is committed to making that happen. Kim Kardashian’s weight loss story is quite impressive as she has been working out twice a day. Her workouts include a lot of cardio and Pilates to tone, followed by a very strict Atkins diet, where she eats only 20 grams of carbs every day. Her hard work is paying off as we can see her tiny torso in the “M.I.L.F. $” music video. Initially, fans were speculating that it was just photoshop, but Kim proved them wrong, although she admits to wearing a corset to get back in shape.

Besides going to the gym, she continues to update her fans about her weight loss. She started working out intensely when she got the news that she will be on the cover page of GQ’s 10th annual “Love, Sex & Madness” issue. Kim said, “I woke up every day at 6 in the morning and worked out. I did a strict Atkin’s diet. Strict, strict, strict. It was truly hard for me to diet with the first baby.” She also said, “This time was so much easier, and I realized [it comes down to] the food. I mean, I love to work out, and you have to definitely work out to tone up, but so much of it is how you eat. I had to really stay focused. I had to cut out all the sweets and I had such a sweet tooth,” she said. “After-baby body? I welcome that challenge. It’s so crazy to see what your body can go through and what it’s capable of.”

She is so keen on getting back into shape that she decided to stay home for the 4th of July, so that she won’t be tempted to eat junk food. Way to go, Kim! Her results are certainly evident in Fergie’s “M.I.L.F $” music video. This music video also features various stars such as Ciara, Chrissy Teigen, Gemma Ward, Alessanda Ambrosio, Tara Lynn, Devon Aoki, Angela Lindvall, Isabeli Fontana, Amber Valletta and Natasha Poly.