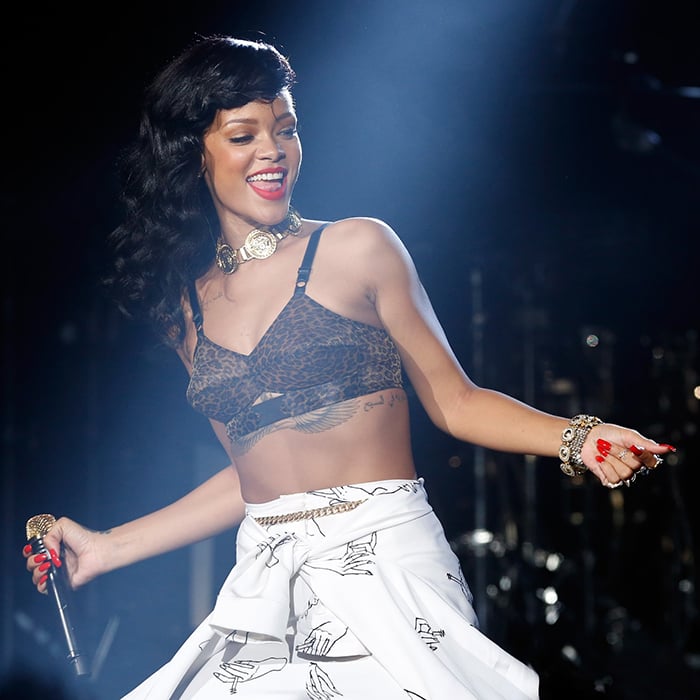 If you’ve got a Rihanna fan on your Christmas gift list this year and you’re stumped about what to get them, the singer herself just offered up the perfect idea on Instagram—Rihanna socks that have just as much attitude as she does!

Rihanna has teamed up with the sock company Stance, who often collaborates with stars on pieces that reflect their “art and self-expression.” The singer showed off part of her collection in a photo featuring two of her sock designs, one with a woman wearing a mini Santa dress with red thigh-high stockings, and another with a woman wearing a fur coat, sunglasses, booty shorts, and thigh-high socks—according to the web site, these two looks are called “Pimp Claus.” Rihanna captioned the photo, “Bitch better have my mistletoe,” a play on her hit song “Bitch Better Have My Money.”

In just the first couple hours it was up, the post racked up almost 140,000 likes and nearly 1,500 comments, many from fans who wanted to snatch up a pair for themselves.

bitch better have my mistletoe #rihannaxstance

The RnB singer’s collection, called Fenty for Stance by Rihanna, includes a wide range of socks that play on her naughty but nice persona. For instance, you can get a pair of white, sheer, ankle-length nylon socks with a bit of playful fur around the top. But if you want something a little more playful, you can get the same thing in a length that comes up past the knee, for a slightly sexier look.

NBA player Dwyane Wade also teamed up with Stance on his own artistic sock collection, which features bold colors and mixed patterns. Meanwhile, the NBA collection is designed with the faces of famous basketball players.

If movies are more your thing, Stance even has a Star Wars collection that can turn your feet into Darth Vader, Chewbacca, or a Stormtrooper.