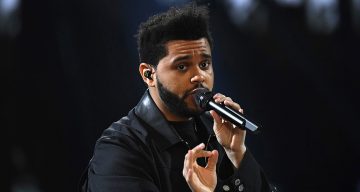 The Weeknd is a Canadian singer, record producer, and songwriter with an estimated net worth of $8 million.

The soul and R&B singer is an emerging name in the music industry, and with his latest album getting eight Grammy nominations this year, The Weeknd is one hell of an artist to watch. The Weeknd first got noticed when his uploaded videos on YouTube garnered a rapidly growing number of views, not to mention great reviews.

The Weeknd’s net worth picked up from his earnings through sales of his record albums, singles, and tours, as well as revenues from his YouTube channel. In 2015, The Weeknd entered the Billboard Hot 100 chart with his singles from his third album Beauty Behind the Madness—his tracks like “The Hills” and “Can’t Feel My Face” peaked at the number one spot on the chart last year. The album became his first number one album on the Billboard 200 chart. The Weeknd’s “Earned It” single from this album was also featured on the original soundtrack for last year’s hit erotic blockbuster Fifty Shades of Grey (but more on this later).

The Weeknd Net Worth Breakdown

Before becoming popular with the stage name The Weeknd, Abel Tesfaye (his real name) was a young and aspiring R&B singer from Toronto, Canada. Abel grew up listening to a variety of music genres, like soul, funk, quiet storm, indie rock, and hip hop. With his father being absent during childhood, Abel grew close to his grandmother, who taught him Amharic. The Weeknd even sang a rhyme in Amharic at the end of his song “The Hills” as a reminder of his grandmother’s influence in his life and music, as the rhyme translates to, “I love you, my beautiful, my love, love, love…”

Abel dropped out of college at 17 and adopted the stage name The Weeknd to start working on his music career. By this time, he had not earned any substantial money and had already headed out to make a name on his own.

Sales from Music Albums and Singles

Abel Tesfaye met producer Jeremy Rose in Toronto and they started working on an R&B musical project with a dark influence. They made three songs—“What You Need,” “The Morning,” and “Loft Music”—by 2010, they were uploaded on YouTube under his stage name The Weeknd. The songs started creating buzz online and a fellow Toronto artist, rapper Drake, featured them on his blog.

By 2011, The Weeknd had released three mixtapes called House of Balloons, Thursday, and Echoes of Silence. These were combined as the Balloon Trilogy album. In September 2012, The Weeknd signed a record deal with Republic Records, joining his own imprint music label XO with it. The mixtape compilation was released as the Trilogy album, which peaked at number five on the Canadian Albums Chart and number four on the Billboard 200 chart in the U.S. in 2012. The Weeknd’s album got great reviews and has sold over half a million copies just in the U.S., adding a hefty lump sum to The Weeknd’s net worth.

The album sales of his next albums Kiss Land (2013) and Beauty Behind the Madness (2015) are believed to have added over $3 million to The Weeknd’s net worth. Below is a comprehensive compilation of his estimated earnings from the sales of his studio albums and singles.

The Weeknd has added extra earnings from performing his singles “Can’t Feel My Face” and “In The Night” at last year’s Victoria’s Secret Fashion Show in New York.

Furthermore, The Weeknd contributed the track “Devil May Cry” for the soundtrack of the 2013 blockbuster The Hunger Games: Catching Fire, and also collaborated with singer and songwriter Sia on the film’s other leading track, “Elastic Heart.”

In 2014, The Weeknd released his duet “Love Me Harder” with pop singer Arianna Grande and the song peaked at the seventh spot on the Billboard Hot 100 chart. Later that year, The Weeknd’s unreleased track “Earned It” was selected for an original soundtrack release for the movie Fifty Shades of Grey (2015). The track was later included in The Weeknd’s third Grammy-winning album, Beauty Behind the Madness, and he recently received another Grammy Award for Best R&B performance for this track. The Weeknd has also done a remix of Beyoncé’s chart-topping single “Drunk in Love,” adding his signature soul touch and a male perspective to the remix.

The Weeknd Net Worth Over the Years

The Weeknd has endorsed brands like Alexander Wang, Apple Music, PAX Vaporizers, and has been on the cover of Rolling Stone magazine, along with endorsements with MTV, BET and XXL. The Weeknd has also given his voice to Hugo Boss’ latest fragrance commercial.

With regards to investments, The Weeknd has donated a part of his earnings to the Ryan Seacrest Foundation that’s dedicated to inspire youth to participate in entertainment, sports, and show business. He also did something very sensible and caring with his millions of dollars in earnings—he bought his mother a huge house in Toronto.

It took pure talent and a compelling amount of dedication for this 26-year-old guy to accomplish what he has today. The Weeknd’s $8 million net worth is likely to get even higher after his Grammy wins and even his impressive Oscar nomination, again for “Earned It” in Fifty Shades of Grey. This year, The Weeknd will be touring with Rihanna with her Anti World Tour and is slated to work on new music, including a whole lot of collaborations with several top artists. That’s surely encouraging a lot of other young artists to follow their passion, just like The Weeknd did.