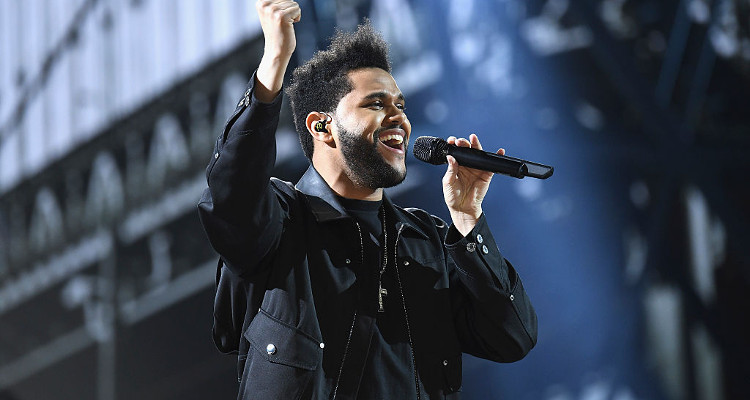 The Weeknd joined Daft Punk on the Grammy stage on Sunday for an awesome mash-up of “Starboy” and “I Feel it Coming.” While The Weeknd celebrated his Grammy performance with Selena Gomez, her ex, Justin Bieber, mocked the singer!

Selena Gomez was absent at the 2017 Grammy Awards, so we didn’t get to see her debut as a couple with Abel Tesfaye, a.k.a. The Weeknd. But we did get a mind blowing performance from The Weeknd and the alien/robot/EDM duo, Daft Punk. While music lovers were basking in the afterglow of the star-studded performances, Tesfaye and Gomez partied together at Rihanna’s Grammys after-party. That probably didn’t sit well with Gomez’s ex, Justin Bieber, who threw some shade at the “Starboy.” Nevertheless, the 26-year-old is treating fans to rehearsal and backstage photos of his Grammy performance, which look as good as the real thing. Check out The Weeknd’s Grammy posts right here.

For the second performance of the 2017 Grammy Awards, The Weeknd and Daft Punk performed a creative mashup of “Starboy” and “I Feel it Coming.” It was a spectacular comeback, worthy of Daft Punk, who swept the 2014 Grammys with five awards! The Grammy stage was transformed into a space-themed, light-filled deck, while a sharp-suited Tesfaye stood between the duo who wore capes and their signature robotic helmets.

Much like us, The Weeknd is so in love with the performance that he can’t stop sharing pictures of it on his Instagram! The Canadian hitmaker uploaded a string of posts from the Grammy rehearsals as well as backstage pics before their performance. Daft Punk is featured on “I Feel it Coming” and Tesfaye had said the duo can be very “cinematic” while recording. No doubt, the Grammy performance was true to Daft Punk’s style, and The Weeknd certainly fits right into the otherworldly spectacle.

When The Weeknd was spotted on a romantic getaway with Selena Gomez, both of their exes showed displeasure. Bella Hadid unfollowed Gomez on social media and Bieber said he’d never listen to The Weeknd’s songs.

Despite the anticipation that a new couple would debut at the 2017 Grammys, Selena Gomez was absent at music’s biggest night. But she did join her rumored new boyfriend at Rihanna’s private after-party, and a source told People that Bieber dropped by the post-Grammys bash, as well. Bieber skipped the Grammy Awards and had kept his distance from the couple during the after-party. But it doesn’t look like he was a gracious ex.

While the Grammys were being broadcast live, The Biebs was engaged in a live Instagram chat with his Beliebers. During the chat, he replied to a fan saying that his “favorite song at the moment” is “Starboy” by The Weeknd. After a dramatic pause, the singer and his friends broke into hysterical laughter indicating he was being sarcastic.

Bieber may not be a fan of his fellow Canadian import, but The Weeknd’s Grammy performance was loved by many.