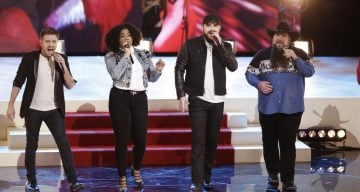 Only four contestants remained on The Voice season 11. Billy Gilman, Josh Gallagher, Sundance Head, and Wé McDonald competed for the last time this season. One of them won The Voice 2016. Who won The Voice tonight?

The Voice season 11 finale was tonight. Last night (December 12), the final four artists performed and appealed for votes one last time. The votes have been counted and  Billy Gilman, Josh Gallagher, Sundance Head, or Wé McDonald won. With no contestants from Miley Cyrus’ team making it to the finals, it was between Adam Levine, Blake Shelton, and Alicia Keys to become the winning coach of season 11. Who won The Voice season 11, and which coach emerged victor? Find out right here.

Coach Adam had two contestants, Billy Gilman and Josh Gallagher make it to the top four. In the last few weeks, Billy Gilman, the former Grammy nominated child musician, was a frontrunner for the ultimate prize. Justin Bieber even endorsed him on Twitter! If he or Gallagher win, it will be Adam’s fourth win since coaching The Voice.

Blake Shelton has bagged the most wins as coach on The Voice with four winning artists, and he hoped Sundance Head would give him his fifth win with his stellar performance during Monday night’s (December 12) show. It’s Alicia Keys’ first time coaching on The Voice and Wé McDonald has been a fan favorite since day one. If there was anyone who could get Keys her first victory on the show, it would be McDonald.

After performing for votes on Monday night, Billy Gilman, Josh Gallagher, Sundance Head, and Wé McDonald awaited the results on tonight’s (December 13) finale. But before that, the show kicked off with some mind-blowing performances.

The illustrious Stevie Wonder and pop sensation Ariana Grande set a benchmark of opening performances. They sang “Faith” from the new movie Sing together, and made audiences go wild. It was a tough act to follow, but Team Blake’s Austin Allsup and Team Adam’s Josh Gallagher and Brendan Fletcher’s performance of “My Kind of Party” was finale-worthy.

Season 9 winner, Jordan Smith, returned to The Voice stage to perform a song from his Christmas album “’Tis the Season.” Following a look back at Blake Shelton’s team’s journey throughout this season, Team Alicia’s Mcdonald took the stage with none other than John Legend himself. They performed Legend’s newest song, “Love Me Now” as a duet.

Show some love for @johnlegend and @we_mcdonald! These are the moments we live for. #VoiceFinale pic.twitter.com/Nlg99wUlna

After a look at Miley Cyrus’ journey on the show, Sting appeared on stage as another guest performer. There was a hilarious short clip about Blake Shelton’s fashion sense following the Weeknd’s performance of “Starboy” before Sundance Head took to the stage with the rock band Kiss.

Mcdonald performed for the last time with her fellow contestants and friends, Brendan Fletcher, Darby Walker, and Aaron Gibson. They performed Kanye West’s hit, “Love Locked Down.” Kelly Clarkson sang “It’s Quiet Uptown” with Billy Gilman. Bruno Mars also hit the stage to perform his hit “24K Magic” to the crowd. After all these performances, it was announced that Sundance Head is the winner of The Voice season 11.

Congratulations to Sundance Head and Coach Blake Shelton on winning The Voice season 11!