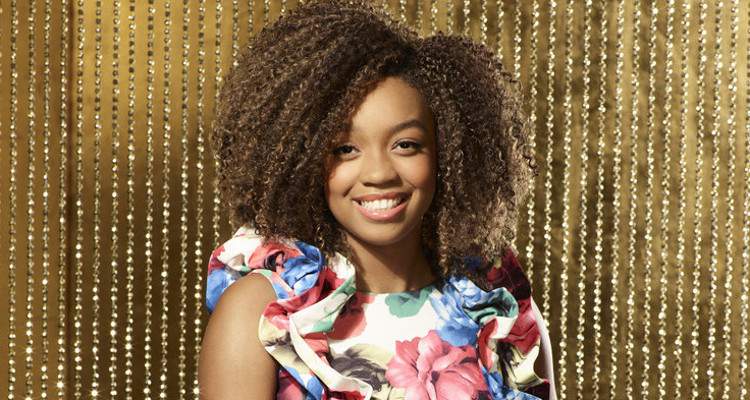 From the moment Shi’Ann Jones appeared on The Voice, she proved that her voice transcended her age. Team Jennifer’s starlet may be young, but she is giving her fellow competitors a run for their money!

When Shi’Ann Jones belted out “Drown in My Own Tears” at The Voice 2017’s blind auditions, Jennifer Hudson turned her chair on the very first note. And if the other coaches are to be believed, she threatened them not to turn their chairs so she could have this young talent on her team. The first-time coach might have a winner on her team! Shi’Ann Jones breezed her way through the competition to perform in the top 12 last night and Jennifer Hudson’s mini-me made it through to the next round! Find out about this aspiring singer in our Shi’Ann Jones wiki.

Singing is a Family Affair

The 15-year-old lives with her family in Bowling Green, Kentucky, but is originally from Paducah. She says it’s hard to stand out in her family because she’s one of nine siblings.

The singing genes come from her father, Ricky Jones. He was a gospel singer who traveled to different churches. It’s obvious who Shi’Ann’s first music teacher was, “I’ve been singing since I was 3, and my dad coached me until now.”

When Jones was a child, her father taught her scales. By the age of four, Jones’ singing was all you could hear in the house. By the time she was seven, she progressed to performing with her father in churches.

She said she admires singers like Demi Lovato, Celine Dion, Mariah Carey, and Whitney Houston, but her biggest inspiration is her dad. Aw! They even set up a PA system in their living room where they would practice together. It also came handy during some father-daughter singing battles!

hey guys how it going ? comment down below and tell me how everything is going with every single one of you ??it would be amazing too tell me how things are going in your life …..?.#BEFOREVERBLESSED. #SMOOCHES?

Also Read: Lucas Holliday Wiki: Everything to Know about “The Voice” Contestant

Shi’Ann Jones seems to be a shy girl until she starts to sing. When she was eight years old, her parents gave her performing talents a push. Her father signed her up for her first talent contest and from then on, she was singing at football and soccer games around town.

“She is not afraid of the stage. When she opens her mouth it’s like a whole different world,” said her mother, Marilyn Jones. “She knows what she wants to be. She asks her daddy, ‘When is my next singing engagement?’”

wow i dreamed and prayed to stand on a stage like this and my dreams are coming true ????? #TEAMJHUD

There are videos of a pre-The Voice Jones performing at events in her hometown. She sang at the Paducah Human Rights Commission program a couple of years ago. You can check out more of her performances on her YouTube channel managed by her parents.

Shi’Ann and Marilyn tried to look for opportunities where she could perform beyond Kentucky. So, Marilyn Jones recorded a video of her daughter singing the national anthem and sent it to every NBA team in the country. She struck gold when the Utah Jazz invited her to sing at one of their games. They flew her in to sing the national anthem before the game.

wow guys!!!! you don’t know how much it means to be making it too the playoffs!!this has been my dream for years. i get closer to my dream ?

She’s Not New to The Voice

After performing at the Utah Jazz game, Jones realized her dreams to perform on a national stage. And what bigger stage than The Voice? But before she won a spot on Jennifer Hudson’s team, she was in Alicia Keys’ corner of The Voice Snapchat edition.

The NBC show broke new grounds by collaborating with Snapchat to launch a miniseries version of the competition on the popular app. Jones was selected among 20,000 submissions by former coach Alicia Keys. She made it all the way to the finals but lost to AJ Mitchell. But this didn’t deter this young starlet who tried for the blind auditions this year and made it on Team Jennifer. We can’t wait to see what’s next for this budding starlet!