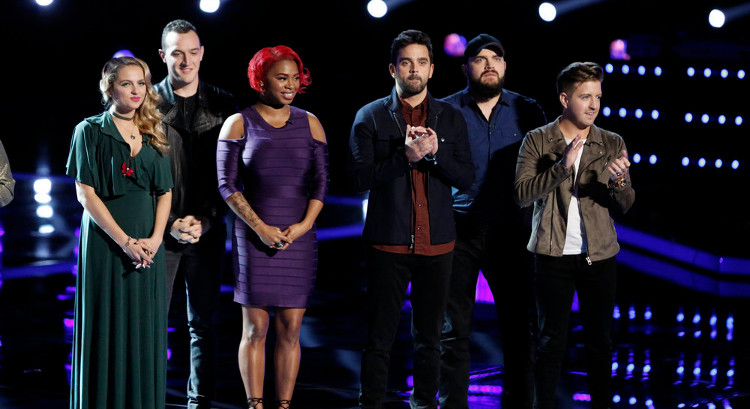 One contestant was eliminated in the results episode of The Voice last night. Who went home and who are the Top 10? Here’s what happened on Tuesday night’s The Voice.

Every Tuesday, we bid adieu to one talented singer on The Voice. After Monday night’s (November 21) live playoffs, the votes were tallied and two contestants, Aaron Gibson and Darby Walker, were in the bottom two fighting for an instant save. Host Carson Daly gradually revealed which contestants are safe when The Voice results episode began, and we also got to see Blake Shelton and Alicia Keys perform with the remaining contestants of their teams. Season 9’s winner, Jordan Smith was also a guest performer of the night. Who got eliminated, and who are the top 10 contestants of The Voice? Here’s what happened on last night’s (November 22) episode.

The Bottom 2 Fight for Another Chance

The Top 10 are Revealed

After Darby Walker was eliminated, we now have the top 10 artists of The Voice season 11. Here are the contestants America has voted into the top 10:

Team Blake’s Sundance Head has been a front-runner this season. His rendition of Alicia Keys’ “No One” made Keys herself admit she’s never heard anything like it. He got the highest votes this episode with the iTunes bonus multiplier added to his votes.

She’s the youngest contestant currently in the competition. Her performance of Rihanna’s “Love on The Brain” made her the second highest voted. She and her teammates took to the stage with their coach, Alicia Keys in Tuesday night’s (November 22) performance.

Gillman has time and again proven why he has a Grammy nomination. He performed Adele’s “All I Ask” on Monday (November 21), making even Blake Shelton ask, “Do you ever hit a bad note?” He was the first person from Team Adam to be announced as safe.

Caldwell is Team Miley’s vocal powerhouse. which she proved when she sang “9 to 5” on Monday (November 21). Daly asked Caldwell how her coach has helped her improve, to which Caldwell got a little emotional while thanking her coach.

Allsup got together with his teammates to perform with their coach Blake Shelton on The Voice. He was announced to be in the top 10 soon after the performance.

Along with Allsup, Carson Daly announced Fletcher as being the second Adam Levine protege who was safe from elimination. Blake Shelton commended Fletcher when he performed “The River” by Bruce Springsteen.

After season nine’s winner Jordan Smith performed “O Holy Night” and was congratulated by his former coach, Adam Levine, for selling over 7 million singles last year, Daly announced that the next safe contestant is Christian Cuevas from Team Alicia. It’s double celebration for Cuevas who recently got engaged to his girlfriend of three years.

Harrell was the last member of Team Blake to make it into the top 10. She has been close to elimination a few times but always returns fighting. She also performed on the results show with her coach and teammates.

Team Adam’s Josh Gallagher was the last artist automatically voted through. He sang “Drunk on Your Love” by Brett Eldredge. The studio version of his song was #91 on the iTunes charts.

The final entrant into the top 10, Gibson was the victor of the instant save via Twitter for his performance of George Ezra’s “Budapest.” It was a very emotional moment for Miley Cyrus seeing two of her artists in the bottom two. In the end, she had to say goodbye to Darby Walker, and Aaron Gibson barely made it into the top 10.

The Voice season 11 airs every Monday and Tuesday, at 8:00 p.m. EST. Tune into NBC to watch the live playoffs and vote for your favorite artist to stay in the competition.