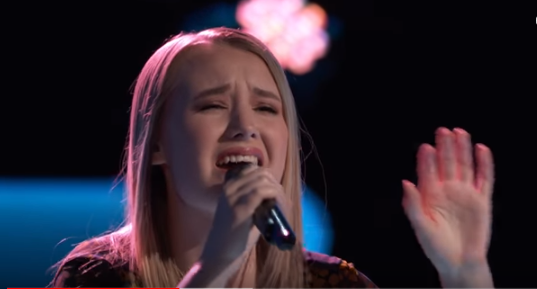 The Back Story on Addison

Addison Agen was born in Fort Wayne, Indiana on March 31, 2001. She has been singing from the very early age of four and in an effort to keep her mind open, Addison Agen’s parents’ exposed her to the most music possible. This was helped by the fact that her father, Morrison, bought a record store when she was 9. At the age of 11, Addison began writing her own songs and her dad built a small stage inside of his record store so that she would have a place to perform and hone her craft. Addison released her first album, New Places when she was just 15 years old! Soon came an opportunity that changed her life when her Spanish teacher suggested that Addison audition for The Voice.

She Nailed The Voice Audition

Addison Agen’s audition was like all the others on the show, blind. But the power of her voice managed to win over the judges and earn her a spot on Team Miley. She did so well that Adam Levine ended up stealing her away to his team!  As of this writing, Addison is now going to the live playoffs.

Before Addison Agen flew out to appear on The Voice, she had never even been on a plane before! Now, she’s poised to take over the world of pop music. But she knows that she isn’t doing it alone, as she has been gaining massive support from her hometown. Addison Agen’s Fort Wayne fans are loud and proud and are rooting for their home girl to take the title!

Where to Find Addison

Addison has been pretty good about keeping up with her now-growing social media following. She has accounts on Facebook and Twitter but as far as we could tell, the various Addison Agen Instagram accounts are fan run. Addison’s Facebook and Twitter are a great look at the behind the scenes of her life, as she’s not afraid to post a picture of her younger years (as well as ‘first-thing-in-the-morning studio shots). And while not exactly social media, you can also have a listen to Addison’s original material on her Bandcamp page! Not only can you listen to her album, New Places, you can also hear earlier versions of a few of the songs she’s performed and see how Addison has progressed as a singer and songwriter. Keep an eye on this one, you could be seeing her name in lights very soon!