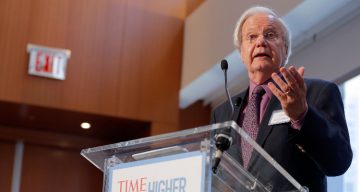 Bill Moyers is a celebrated veteran journalist, whose opinions you can’t ignore. Having served in the White House and doing over 1000+ shows in his heyday, Moyers has the political expertise that matters —especially in the Trump era.

Bill Moyers is lauded as the most trustworthy journalist of all time. He may not be as active as he was before, but that doesn’t mean he doesn’t have a say in the current state of politics. Moyers continues to offer valuable political commentary, especially on the Trump administration. His website formed a comprehensive timeline of Donald Trump’s Russian connection, which is a must-read. Bill Moyers has more on Donald Trump and his policies on his website. Find out more about what makes this man’s political insight so valuable, right here in our Bill Moyer wiki.

Billy Don “Bill” Moyers of Oklahoma was born to John Henry Moyers (a blue-collar worker) and Ruby Johnson Moyers. His career began at the age of 16 when he was a reporter for the Marshall News Messenger in Texas where he grew up. It was natural for him to study journalism at the North Texas State College in Denton.

Soon, the young Moyers was handling Sen. Lyndon B. Johnson’s personal mail after a summer internship. When he transferred to the University of Texas in Austin, he found a job writing for The Daily Texan. After graduating in 1955 with a Bachelor of Arts in journalism, he worked in Austin’s radio and TV stations which were owned by Sen. Johnson’s wife.

While pursuing academics and professional journalism together, he also managed academic achievements. He studied at Scotland’s University of Edinburgh as a Rotary International Fellow. He also served as an ordained Baptist pastor and was planning to pursue a Doctor of Philosophy degree in American studies.

Moyers was a top aide to Sen. Johnson during his unsuccessful presidential bid. But Johnson was selected as John F. Kennedy’s running mate and Moyers was the liaison between the presidential nominee and the VP candidate. He worked in the Kennedy administration and as assistant to Johnson when he took office after Kennedy’s assassination.

He was the unofficial chief of staff before his appointment as White House Press Secretary. Moyers had approved of President Johnson’s infamous “Daisy Ad” which brought him a landslide victory against opponent, Barry Goldwater.

Armed with political knowledge as a press secretary, Moyers returned to broadcast journalism with Newsday. He turned the failing publication into a raging success and it went on to win 33 journalism awards, including two Pulitzer Prizes. When it was sold to the Time-Mirror Company, Moyers resigned and moved to PBS where he hosted the news program, Bill Moyers’ Journal.

He was editor and chief correspondent for CBS Reports, senior news analyst and commentator for the CBS Evening News, and the network’s last regular commentator. He declined to renew his contract with CBS because of work commitments to PBS. He produced several documentaries before a brief stint at NBC News.

BillMoyers.com is a one-stop source of information on the current political scenario. He gave a detailed analysis of every move of the administration. The site has an expanding timeline of the Trump-Russia connection, starting all the way from 1976 when Trump met Roger Stone, to August 6, 2017, when Kellyanne Conway brushed off the Russian investigation as being “nothing.” The timeline, which began in February, has gone from 24 entries to 450!

During his career, Moyers was inducted into the Television Hall of Fame and honored with the Walter Cronkite Award for Excellence in Journalism. He won at least 30 Emmy Awards and has been the recipient of almost every major TV journalism honor, including a lifetime Peabody Award.

Moyers is married to Judith Suzanne Davidson, a producer who worked with him on some of the documentaries he produced. The husband and wife duo run Public Affairs Television, a production company. They are parents to three children, of whom, their son William Cope Moyers is well-known. William is a producer at CNN and a spokesman for Hazelden Foundation, a drug and alcohol addiction treatment facility.

In William’s own words, “I’m a recovering alcoholic and a drug addict.” He narrated his struggle in the book Broken: My Story of Addiction and Redemption, where he credited his father for supporting him on his road to recovery. William said his parents raised him well, but added, “my brain still got hijacked.” He was an over-achieving student, but it was during his professional life that his addiction got worse. He felt he didn’t measure up to his parents who were accomplished in the field and was unable to go on without getting intoxicated.

When his behavior got erratic, his parents intervened, but for the most of it, Bill and Judith were lost. But Williams was able to get clean after checking in to Hazelden. He relapsed once but was able to get back on his feet after marrying another patient, Allison. He found a job at CNN and acquired his pilot’s license. He had a few pitfalls, but is now a vocal advocate of addiction treatment.

Moyers and Davidson’s daughter, Alice Moyers, is a graduate of Columbia University and a teacher in New Jersey, where her husband works in corporate sales for a firm. Their younger son, John Moyer, is also a reporter who currently works for TomPaine.com. Bill and Judith Moyer are grandparents to five kids.