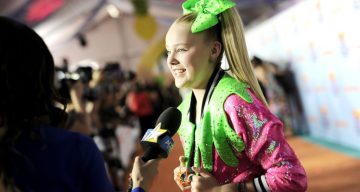 Are you excited to find out who is on this week’s top 10 list? This time, we focused on finding the best YouTubers in the Kids category. We’re here to bring you up to speed on who these talented youngsters are, and which of them have the best YouTube videos so far in 2017. There are two boys and one girl on our most watched YouTube video list, who are blowing the minds of millions of YouTubers with their outstanding talent and showmanship. JoJo Siwa, Jacob Sartorius, and Johnny Orlando are this week’s top three talents and here’s why they’re topping the charts of the best YouTube videos in May 2017 for kids.

Celebrity stars are not only found among the streets of major cities like New York, Paris, London, or Los Angeles; simply browse the Internet and you will find thousands upon thousands of celebrities, who make a living and gain their fan base through YouTube videos. It might sound like a dream job, gaining fame and fortune by simply talking into your iPhone’s video app and uploading it to the video-based social media platform, but it’s a lot more work than it seems. It takes skills, marketing expertise, entrepreneurship, and personality to draw in fans week after week, video after video, and to encourage them to keep coming back for more. It might be exciting to reach the 100 “likes” mark, but for the kids on our top three list, they not only have millions of “likes” on each of their videos, they also each have loyal fan bases of over one million people! What makes these kids so successful? Why do they stand out above the top 10 talents, which include Mackenzie Zeigler, and Casey Simpson? Why did they earn the necklace this week? Keep on reading to find out more about the kids behind some of the best YouTube videos of 2017.

He’s only 14 years old, but he’s already writing songs about romance and relationships! Practically a Justin Bieber clone, Johnny Orlando was born on January 24, 2003 in Mississauga, Ontario, Canada to his parents, Dale and Meredith Orlando. He has two older sisters named Darian and Madison, and one younger sister named Lauren. The YouTube star gained his fame through singing cover songs, and has an additional channel called “JohnnyOsings,” where he also has a solid fan base. His work includes covers from top artists like Justin Bieber (no surprise here!), Rihanna, and Austin Mahone. In a similar fashion to Bieber, Orlando began singing when he was only eight years old, and with the help of his sister Darian, he began making videos for YouTube. It didn’t take long before the young star began creating his own original songs and videos, which include “Day & Night,” “Summertime,” and “Missing You.” In addition to his YouTube star presence, Orlando also appeared in commercials for Cadbury and Nutella on YouTube. He has also acted in the film Bunyan and Babe, which is scheduled for release in 2017. In December 2015, Orlando released his debut EP titled VX11XI. All his talent has placed him within our top three, and we only anticipate seeing more of this rising star.

Another likely Bieber clone is Jacob Sartorious. The young star has been releasing music for a year now, and already he has almost 2.5 million subscribers on YouTube. Could it be his boyish smile, sassy attitude, or fashion style? Whatever it is, teen girls and boys are going crazy over his music. He plays the guitar, is friends with Vine sensation Arielle Vandenberg, and often posts clickbait titles to his videos and draws in thousands of views. He was born October 2, 2002 in Oklahoma, and was adopted when he was very young. When he was seven, he began singing in musicals, but was bullied because of his fame. He boosted in popularity on social media thanks to his lip-syncing videos on Musical.ly. He began posting videos on YouTube as well, and released a series of singles such as “Hit or Miss,” “All My Friends,” and “By Your Side.” On January 20, he launched his debut EP, The Last Text, which led to the announcement of his The Last Text World Tour, where he will perform in seven countries in 2017. Sartorius’ social media is managed by his mother, and she has appeared in several of his Vine videos. He has an elder sister named Caroline. In late 2016, Google announced that Sartorius was the ninth most searched musical artist of 2016, and with his upcoming tour, there’s no limit to the level of fame he could reach!

The number one best YouTuber of 2017 with over 3.1 million subscribers is JoJo Siwa! This little bubble gum princess has almost 241 million views on her “Boomerang” music video alone! The song addresses online bullying and is a hit among young girls. Born Joelle Joanie Siwa on May 19, 2003, she was raised in Omaha, Nebraska, and currently lives in Los Angeles, California. She has several nicknames such as “JoJo with the Big Bow” because of the crazy colored bows she wears in her hair. JoJo is a dancer, singer, actress and most famously, a YouTube star. She started dancing before she was five years old, and as you can tell from her music video, the Hip-Hop style is her favorite. She was among the top five finalists on the season two of Abby’s Ultimate Dance Competition, and she was also the youngest contestant on season two, at only 10 years of age. In 2015, she was selected to join Abby Lee Miller’s ALDC dance competition team and appeared on the Lifetime reality show, Dance Moms. She has made several guest appearances on shows like Good Day LA, Good Day New York, and Make it Pop. This little diva already has her own accessory line that sells at Claire’s retail stores, so little girls can wear big, colorful bows just like her!