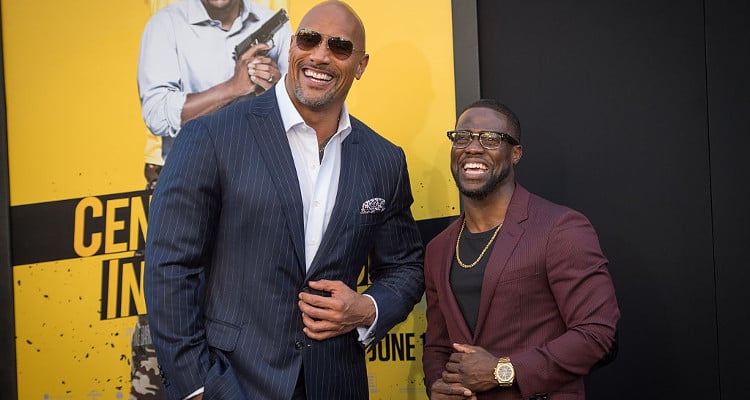 The cast and crew of the new Jumanji film recently wrapped up shooting in Atlanta. The Rock and Kevin Hart documented their hilarious on-set antics for everyone to see, and they shared them on social media.

For all those who don’t know, your favorite childhood movie, Jumanji will be hitting the big screens in December 2017. The continuation of the hit 1995 film of the same name (starring the legendary comedian, Robin Williams) stars Hollywood bigwigs like Dwayne Johnson, Kevin Hart, and Jack Black. Also part of the ensemble cast is Nick Jonas, and Doctor Who actress, Karen Gillan. Excited fans of the original fantasy adventure film are scouring social media for more information about The Rock and Kevin Hart’s new movie, and the cast of Jumanji. Here is everything you need to know, including Dwayne Johnson and Kevin Hart’s shenanigans on the Jumanji set.

The shooting of Jumanji commenced in Hawaii and proceeded in a host of other locations, before concluding in Atlanta. Giving a heartfelt farewell speech, The Rock stated, “We had an amazing time. I think we really made something special. Thank you so much,” while co-host Jack Black proclaimed, “Let’s talk about some of these crew. There are a lot of all-stars on this crew!” It looks everyone definitely had a blast shooting!

Been shooting #Jumanji for months now and I've been waiting patiently for this night to come… In the original movie, the world of #Jumanji came to us. Now 20yrs later in our continuation of the story, we go to the amazing and deadly world of #Jumanji. For months we've shot everything.. all the comedy, all the jungle action and all the heart. Finally, tonight – Saturday night – all night – I get to knuckle up with my stunt brothers and I get to beat some ass like a drum. My stunt brother here @taitfletcher is going night night. And when he wakes up, I'll be good as gone cause he can rearrange my face with one punch. Let's get it on boys and have some fun. #OnSet #KnuckleUp #BeatingAssesLikeDrums #BeenWaitingForMonths #StuntBrotherLuv #Jumanji #Tonights4YouAlanParrish💫

Dwayne “The Rock” Johnson was named People’s Sexiest Man Alive for 2016, and his co-star comedian Kevin Hart jokingly demanded a recount announcing, “I heard it was close. I heard he edged me out by half a point, and you know what? It’s fine. He needed it more than I did. You know what I mean? Every day is a sexy day for me.” The two immensely talented actors have great chemistry, which is poised to translate into some great box office numbers for the producers of Jumanji. They duo has shared plenty of videos and posts with their legions of fans on Instagram, including a video of The Rock scaring the living daylights out of Hart.

According to Sony, “In a brand new Jumanji adventure, the tables are turned as four teenagers are sucked into Jumanji‘s world – pitted against rhinos, black mambas and an endless variety of jungle traps and puzzles. To survive, they’ll play as characters from the game: meek Spencer becomes a brave explorer (The Rock); hulky jock Fridge becomes a tiny genius (Hart); It-girl Bethany becomes a bookworm professor (Black), and nonathletic Martha becomes an Amazonian warrior (Gillan). To beat the game and return to the real world with their lives, they’ll have to start seeing things in an entirely different way.” Jumanji is set to be released on December 22, 2017.

That's a official wrap on "jumanji" people. All I can honestly say is WOW! We worked long hard hours on this film people. I just want to say thank you to the hardest working crew on the planet. You guys were fucking unbelievable. We are going to shock the world with this film. #Jumanji