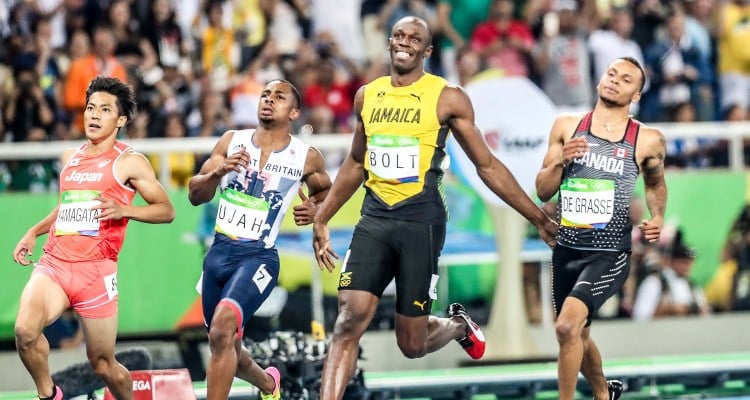 It’s not a bird… it’s not a plane… and no, it’s not Superman, either! It’s the human lightning bolt himself, Usain Bolt! The Usain Bolt smile photo was captured by Australian photographer, Cameron Spencer, and it could very well be the best moment captured during the 2016 Olympics. Considered the fastest man in the world, the Usain Bolt smiling photo shows him racing in front of the line with a huge grin on his face, while the world behind him flashes by in a blur. Usain Bolt’s photo couldn’t have been captured at a better time – this moment is just too perfect! He won gold in the 100m final on Monday and are we even surprised? The Internet is going crazy over this Usain Bolt picture, just check out these five hilarious photos and see for yourself!

Usain Bolt flashes a bright smile as he speeds into the winning spot! This is the golden photo captured by Cameron Spencer that’s taking the world by storm.

"This photo of Usain Bolt @usainbolt was taken during the 100m semi-final. I had time to "play" around on a slow shutter, so I decided to set it at 1/50th of a second. Usually these type of pans work only in one direction and I was surprised it came out this way. As he started to smile and look left and right I actually thought I would not have a chance to get a picture like this – so it was a bit of luck also. It's nice to take a snap which tells a story, shows emotions and was a technical challenge." – Kai Pfaffenbach @kai_pfaffenbach #reutersbehindthelens #usainbolt #winning #smile #rio2016 #olympics

When Flash joined the Justice League as the fastest man in the world, he clearly did not hear about Bolt. Time to give away your costume, Flash. Looks like Usain is in first place!

When #UsainBolt is faster than you pic.twitter.com/FW7AyYoYuw

Ellen is known for her adorable and clever sense of humor – this time she’s created a meme where she is photoshopped onto Bolt’s back, and it’s simply hilarious. She created the caption, “This is how I’m running errands from now on. Rio2016.” It definitely beats traffic!

This is how I’m running errands from now on. #Rio2016 pic.twitter.com/gYPtG9T1ao

Husain Bolt Celebrating with the Fam

If Internet trends have evolved to the level of intelligence which we all hope it has, there’s bound to be a Bolt meme with a cheetah. Today is the day those aspirations become a reality — here you go! Bolt is posed with his adorable child. Aren’t they a cute family?

Usain Bolt celebrates his victory with his son pic.twitter.com/03DKtjjhb8