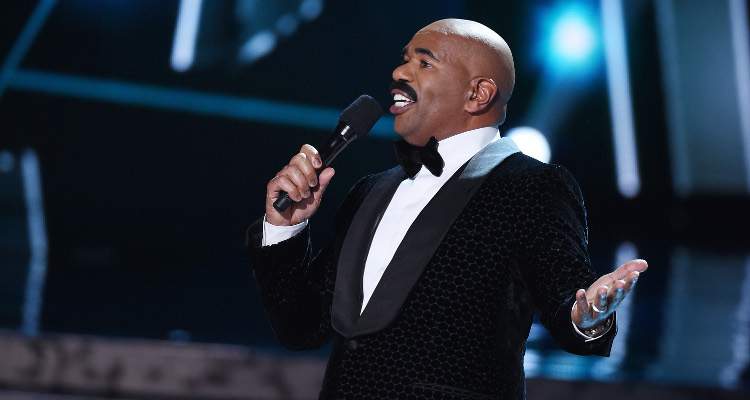 Comedian Steve Harvey has hosted long-time popular game show Family Feud since September of 2010. But it’s only now that he shares a special look at what happens when the cameras stop rolling following each episode!

Harvey wrote on Twitter, “Every successful person must do this.” A bold statement, but the video he embeds from his personal web site backs it up. Titled, “You gotta jump,” Harvey shares what goes on after an episode of his hit game show. “After I tape an episode at Family Feud I spend a few more minutes with the audience,” he explains below the video. “I talk about jumping.”

The video, coming in at around six and a half minutes long, features Harvey addressing the audience while the show’s crew takes apart the set in the background. In the clip, Harvey shares “what every successful person has to do, including you.” What he says every person has to eventually do is “jump,” adding, “You cannot just exist in this life. You’ve got to try to live.” He goes on to state that God has given every person a gift, something they are far better at than most people, such as his friend who was teased for cutting grass but now owns a $4.0 million landscaping company.

According to Steve Harvey, “jumping” refers to the idea of being on the “cliff of life” and seeing others soar to far off places. “But the only way for you to soar, is you’ve got to jump,” he says in the video. “You’ve got to take that gift that’s packed on your back, you’ve got to jump off that cliff and pull that cord.” Not using that gift and just working at a job you hate, he says, isn’t truly living.

Every successful person must do this. https://t.co/mK5bAuErjd

Harvey’s followers appreciated the insightful words, with one fan writing, “WOW! Tears and chills! I needed to hear this, today! That’s what you call sharing the wealth! God bless you and what you do [sic],” with many other people sharing similar sentiments.

And of course, a couple people “jumped” at the chance to make a joke about Steve Harvey’s Miss Universe gaffe, although the host is likely too busy taking his own advice to care. After all, that must be how he’s managed to amass his astounding $100 million net worth!