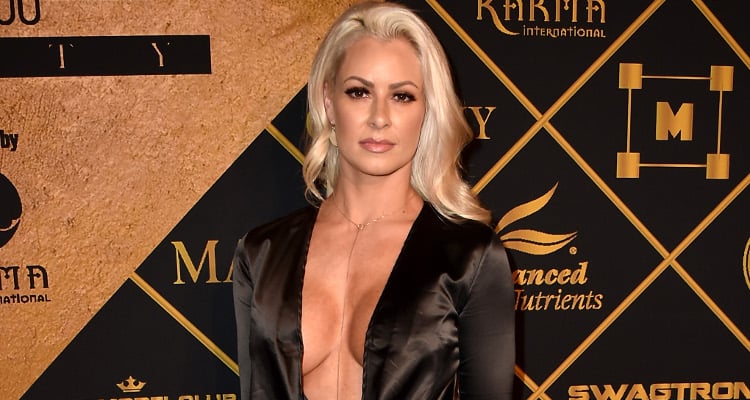 WWE wrestlers, The Miz and his wife Maryse Ouellet, recently announced some fabulous news! Is Maryse pregnant? That’s the word on the street and fans couldn’t be happier for the two! We’ve got the scoop on the happy couple’s announcement and we’ve also got details about The Miz’s wife, Maryse.

On Monday, fans of the American professional wrestler, The Miz, learned some exciting news. During the Monday Night Raw broadcast live on Miz TV, The Miz and Maryse announced that they are expecting their first baby!

While making the announcement, The Miz said, “My wife and I have been thinking long and hard about how we wanted to announce this special news.” He continued, “We thought about it long and hard, and we thought there’s no better place to announce it than the first place that we met, and that is here in WWE in front of all of you. So, without further adieu, my wife Maryse and I we’re, uh … go ahead, babe.” Then Maryse excitedly added, “We’re having a baby!”

There is no news about the due date of the baby yet, but many celebrities took to Twitter to congratulate the expecting parents. It’s definitely a happy time for the couple, and fans of The Miz and Maryse are excited to hear more information about the baby.

If you want to know more about The Miz’s wife, then continue reading!

Born Maryse Ouellet on January 21, 1983, Maryse’s age is 34 years. She was born in Montreal, Quebec, but was raised in Edmundston, New Brunswick.

In high school, Ouellet was the only girl in a class of 30 boys. She was also in charge of her school’s fashion show. And at the young age of 15, she developed her own makeup line!

In an interview, Ouellet said, “When I started in this business, I was 15 years old, and no matter the places I went, there were always really negative people around. There’s a lot of competition and jealousy. I learned that you have to just believe in what you’re doing.”

Ouellet was fascinated with everything related to beauty from a very young age. She started her career in modeling as a beauty pageant contestant.

According to sources, when Ouellet was young, she used to wrestle with her brother. But, she never thought she would end up having a career in it.

In 2006, Ouellet participated in WWE’s Diva Search. When she talked about her experience, she said, “When I finally got to Los Angeles, there were so many girls.” She continued, “You have to come with character and personality. You’ve got to be ready.”

Ouellet was one of the top eight contestants. Following that, she was invited to observe training at Ohio Valley Wrestling (OVW). There, she worked as a wrestler, and as a wrestling interviewer.

Ouellet made her debut on SmackDown! in March 2008, competing in a swimsuit competition. She made her television in-ring debut three months later.

From a very young age, Ouellet has been fascinated with makeup, modeling, fashion, and wrestling. When she talked about her passions, Ouellet said, “I do the best I can do and I’m passionate about it. If people like me, they like me. If not, too bad for them.”

In 2011, Ouellet announced her plans of starting a clothing and jewelry line called House of Maryse. Later in the same year, she worked as a realtor.

Ouellet said about her makeup line, “People are really hard on women today.” She further added, “I really love taking a girl who has no idea how to wear makeup and teach her everything, and show her the difference at the end. The smile on their face is just amazing. It’s like they won a million dollars.”

Currently, Ouellet performs on the RAW brand as the manager of her husband, The Miz.

Her Career Besides WWE

Ouellet has appeared in several films such as Octobre, Sharknado 3: Oh Hell No!, Santa’s Little Helper, Enter the Fist and the Golden Fleece, Delilah, Isle of the Dead, and The Marine 5: Battleground.

Besides movies, she has also worked with some English and French television series like Trauma, WAGS, and Total Divas. She has been a part of Total Divas from season five. The series gives the viewers a glimpse of female WWE wrestlers professional as well as personal lives.

Ouellet is fluent in English and French. And, she can read Spanish but can’t speak the language.

It looks like Ouellet was extremely close to her father. She has a tattoo on her left wrist of the name Guy, which was her late father’s name.

Ouellet is a perfect combination of beauty with brains, and brawn! She has completed her graduation in Business Administration and holds a black belt in martial arts.

She is into techno music. And in her free time, she loves to listen to Nickelback and Simple Plan.

Her inspiration to become a professional wrestler was Lita. She also stated that Victoria and Lita are her dream opponents.

The Miz and Maryse’s Relationship

In 2013, Ouellet got engaged to her long-time boyfriend, The Miz. The couple walked down the aisle in February 2014. Their beautiful wedding ceremony took place in The Bahamas.

After their wedding ceremony, a private party was held for the couple at the Atlantis Resort. And many celebrities attended their wedding after-party to celebrate with the happy couple.