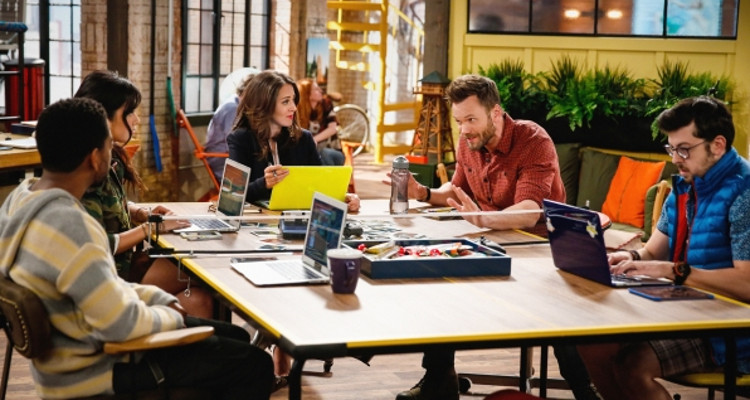 Joel McHale stars in the latest CBS sitcom The Great Indoors. The first episode premiered on Thursday night (October 27) and has received mix reactions from fans.

The Great Indoors is the new CBS sitcom that premiered on Thursday (October 27) night. Joel McHale stars as Jack Gordon, an adventure reporter with a penchant for the outdoors. His outdoor exploration days end when his boss (Stephen Fry) makes the magazine a web-only publication and assigns Jack to a new team comprising of Millennials. Here’s a recap of The Great Indoors, episode 1 and the schedule of episode 2.

This isn’t the assignment Jack had in mind. #TheGreatIndoors pic.twitter.com/0DCAKO6buC

In the premiere episode, Jack Gordon returns from his latest reporting adventure only to discover the magazine he works for, Outdoor Limits, has gone digital. Now Jack no longer can go on any expedition funded by the publication. His boss, Roland, puts him in charge of the online content crew.

This means that the outdoor life Jack loves is over, and he has to deal with a bunch of Millennials who don’t know the first thing about life without their computers. On the other hand, Jack is stuck in his old ways, and still believes people use a fax machine for communication.

The two generations have mixed feelings about each other. Jack confides in a friend, Eddie (Chris Williams), who tells him to give the enthusiastic and competitive youth a chance, “They’re smarter than you think they are. They hustle and know how to make money.”

But generational conflict is the least of Jack’s new problems. He has a new boss, Brooke (Susannah Fielding), who’s Roland’s daughter and Jack’s old flame. So we can expect some romantic sparks in the near future.

Jack and the new team have some troubles when Jack makes one of the younger staffers, Clark (Christopher Mintz-Plasse), cry. But Jack ultimately fixes things with the help of a “comfort animal” in the form of one super adorable baby bear, and they all reconcile.

The show, at first glance, brutally mocks the Gen-X Vs. Millennials conflict, making quips against both generations. There have been some mixed reactions on Twitter to the fist episode of The Great Indoors.

Checked out #TheGreatIndoors mainly because of Stephen Fry. I underestimated the show. Turns out it has enough laughs to keep watching.

“The Great Indoors” is updated cross between “Murphy Brown” and “The IT Crowd.” May it blossom,succeed, and @stephenfry receive favorables.

The Great Indoors. Jeff Winger in a bad sitcom.

Just saw a 4 minute trailer for the CBS series The Great Indoors. What a waste of 4 minutes.

The Great Indoors will air Thursday nights at 8:30 p.m. EST on CBS. You can watch it right after The Big Bang Theory is now in the Thursday at 8:00 p.m. timeslot. The next episode is titled “Dating Apps” and will air on November 3.

In the second episode, Jack will be getting some online dating help from the Millennials. He creates the worst online dating profile that prompts the young staff members, Clark, Emma (Christine Ko), and Mason (Shaun Brown) to intervene.