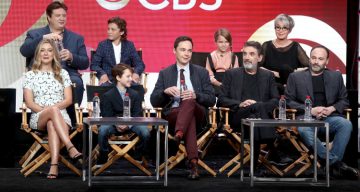 It comes as no surprise that CBS intends to add a spin-off to The Big Bang Theory. The character of Sheldon Cooper, played by actor Jim Parsons on The Big Bang Theory, is the most loved of the show. So, Parsons came up with the brilliant idea of creating a show based on Cooper’s childhood. He discussed the idea with the producers, and the result is Young Sheldon!

Young Sheldon follows the life of Dr. Sheldon Cooper when he was an intelligent nine-year-old kid growing up in East Texas. Fans of The Big Bang Theory will get to see how Cooper handled being the smartest kid in the room. A lot of questions will be answered in the series, like how his fear of chickens or his love for professor Proton came about.

Chuck Lorre, the executive producer, said about the series, “The origins of Sheldon have been something we’ve been interested in writing about for a couple-hundred episodes of ‘The Big Bang.’” Lorre further added, “And so last fall, when Jim (Parsons) sent me an email discussing the possibility of actually taking it a step further, it just seemed like the greatest idea in the world.”

The official date of the season premiere of Young Sheldon is said to be November 2, 2017. However, the pilot episode of the series will air on Monday, September 25 on CBS at 8:30 p.m. EST.

Many people were excited to find out who was playing the role of young Cooper. Although the main character is Sheldon Cooper, his mother, father, and siblings also play a vital role.

Keep reading to find out more about Young Sheldon’s cast.

This photo just brightened my day! I am so thankful I was able to send my friend @IainLovesTheatre to cover the #TonyAwards for my website today! I can't wait to watch! Thank you to everyone who stopped to chat with him! He even got a personalized rap from #LinManuelMiranda! PerezHilton.com/TonyAwards

Ian Armitage plays the role of nine-year-old Sheldon Cooper. Armitage is better able to play a young Cooper because Parsons, who is also the executive producer of the show, has been coaching him continuously.

Parsons said, “I was able to interact with Iain a lot and kind of discuss certain things that are peculiar to this character.” Parsons further added, “And whether it was just lines, or moments in general or Sheldon’s take on the world. It’s an interesting topic for us to go over together. Through that, though, I have to tell you that it was a very moving experience to me to see something that I’ve put in a decade of my life toward.”

The nine-year-old American actor is the son of Scottish singer and actor Euan Morton. Armitage’s mother, Lee Armitage, is a theater producer.

Besides his big break in Young Sheldon, Armitage has appeared in several other series like Big Little Lies and Law & Order: Special Victims Unit. He has also worked in two films, The Glass Castle and Our Souls at Night.

Actress Zoe Perry is playing the role of Mary Cooper, who is Sheldon’s mom in the series. On The Big Bang Theory, Perry’s real mother, Laurie Metcalf, plays the role of Cooper’s devoted mother. Now Metcalf’s daughter, Zoe Perry, is stepping into her shoes in Young Sheldon.

Talking about the show and her role, Perry said in an interview, “I guess there’s no pressure, it’s a gigantic and wonderful show. And with that comes some stakes, so hopefully I live up to that.”

In fact, Perry had to audition for her role and said, “I had to audition like everybody else. I didn’t go in there thinking, ‘I’ve got this.’ I always think, ‘Wouldn’t that be nice but probably won’t happen.’ Which is frankly how I went into this one. So, it’s pretty marvelous that I have the opportunity.”

On Young Sheldon, Perry plays the role of a protective and supportive mother. She said about her role and Armitage, “We get introduced to Mary at a very different stage in her life. She’s figuring out as best as she can how to help Sheldon navigate this world in which he feels so alienated.” Perry continued, “Working with Iain was really easy; he’s a wonderful actor, and so present. It’s a really lucky position to play mom to these kids who are so warmhearted and generous. I just get to show up.”

In Big Bang Theory, Cooper’s father, George Cooper, Sr., was portrayed as an alcoholic who died when Cooper was 14. In Young Sheldon, the role of Cooper’s dad is played by Lance Barber. In the series, George is finding it difficult to understand Cooper and “he is struggling to find his way as a High School football coach.”

The role of Cooper’s twin sister, Missy Cooper, is played by Raegan Revord. At a very young age, Revord knew that she was interested in acting. So, to further pursue her dreams, Revord and her family moved to Los Angeles.

At the age of six, Revord landed the recurring role of Megan on the hilarious and famous series, Modern Family. Her acting credentials also include Grace and Frankie, W/ Bob & David, and a recurring role on Teachers.

In Young Sheldon, Sheldon’s twin sister hates all the attention that Sheldon gets at times. However, she is the only person who can tell Sheldon the truth.

In Young Sheldon, he is in high school making it through and trying to do the best he can. However, George Jr. finds it difficult to retain his cool reputation while being in the same class with his nine-year-old brother, Sheldon.

The role of Sheldon’s grandmother, “Meemaw” will be played by actress Annie Potts. Of course, we will see other people on the show. But for now, these are the main characters.

Actor Jim Parsons will narrate the series as the older Sheldon Cooper.

Are you excited to watch the show? Let us know your opinion in the comments section below.