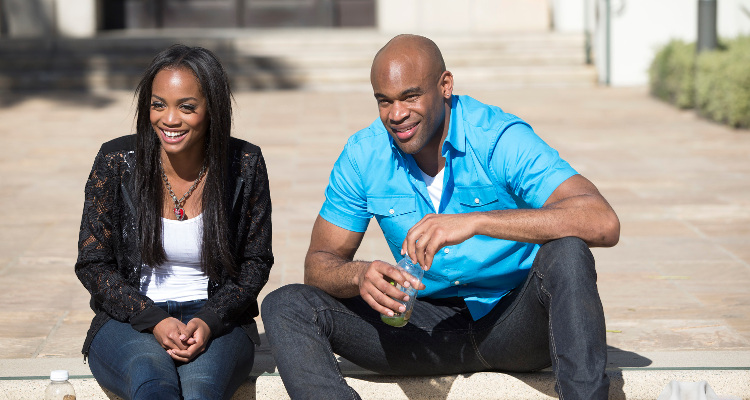 DeMario Tries His Luck a Second Time …and Gets Shot Down!

Episode 2 of The Bachelorette ended with DeMario Jackson returning to the mansion hoping to get a second chance with the beautiful bachelorette. However, Rachel Lindsay had none of it and sent him home —again. She then joined the remaining suitors during the cocktail party. But the drama did not end there. Back at the house, Lucas and Blake E. continued to butt heads. Their feud took a weird turn after Lucas told Rachel that Blake E. was apparently eating a banana while standing over him in bed.

The Rose Ceremony and Elimination

With the stakes this high, it is not surprising that the guys were really nervous about the Rose Ceremony this week. The guys who were sent packing were Jamey, Lucas, and Blake E. After their elimination, Lucas and Blake E. got into another fight outside the mansion, with Blake E. claiming that he was dragged into the drama started by Lucas, thus resulting in his elimination.

The Group Date on The Ellen DeGeneres Show

It was a brief encounter with @theellenshow, but the boys are rocking their new gifts! #TheBachelorette

For the group date, Alex, Peter, Will, Fred, Jonathan, and Bryan were chosen to join Rachel on The Ellen DeGeneres Show. Ellen put the men to the test, after asking them a couple questions, including whether or not Rachel had kissed any of them yet!

Bryan was quick to reveal that he “kisses and tells,” prompting Will to admit that he also locked lips with Rachel! Peter, on the other hand, remained tight-lipped. (Such a gentleman.)

Ellen then asked the men to take their shirts off for charity. They readily agreed, and gave audience members lap dances for dollar bills! To make things more entertaining, they all played “Never Have I Ever,” which gave Rachel a good chance to connect with the guys. Finally, the truth about Peter and Rachel’s kiss came out, and Fred discussed his past with Rachel.

After leaving The Ellen DeGeneres Show, they all went to a cocktail party, where Fred was eliminated after locking lips with Rachel. Though the kid from her past seemed to be falling for Rachel, their kiss confirmed that the feelings just weren’t there for Rachel. However, Alex fared well, as he got the group date rose.

Rachel Lindsay and Anthony Battle had a unique one-on-one date. They rode horses down Rodeo Drive and did a little bit of shopping before heading out to dinner. It seemed like the date was a good one, as Rachel gave Anthony a rose at the end.

Things Get “Dirty” on the Second Group Date

There will be mud! #thebachelorette

For her second group date, previous contestants from Nick Viall’s season of The Bachelor planned a muddy date for the men. The guys who got down and dirty for this date were: Lee, Adam, Eric, Bryce, Kenny, Jack, and Iggy. It came down to Kenny vs. Bryce, and although Kenny seemed to dominate, he eventually lost!

The girls later broke the news to Rachel that they think Eric is on the show for all the wrong reasons. She then confronted Eric, who put his feelings out on the table, and she gave him the group date rose. However, Eric’s fiery temper could be what gets him into trouble as Rachel then hears Eric screaming at Lee in an explosive manner. Of course, we won’t see what goes down between the two until next week! Based on the preview alone, it looks like the meltdowns are just beginning as we see a tearful Rachel unsure of what to do! The race card gets pulled as well, with Lee being at the center of the drama. Check out the preview below!


Tune into The Bachelorette next Monday at 8:00 p.m. EST on ABC to see it all unfold!