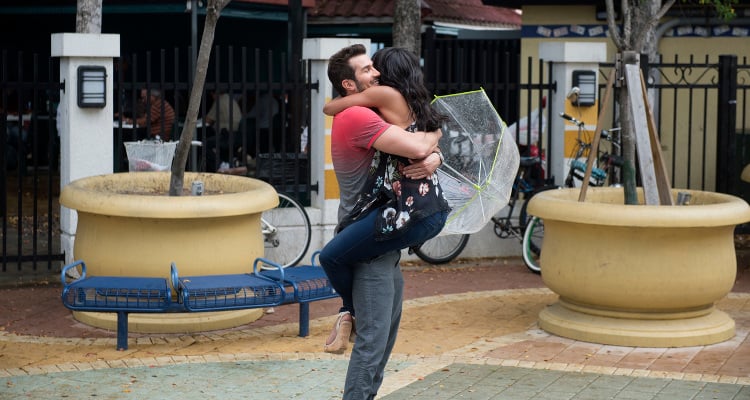 Switzerland was as amazing for Rachel Lindsay as it was for the four remaining bachelors, who wooed Rachel with their charm and wit. Did this make her decision more difficult as we near the end of The Bachelorette season 13? Maybe, but Rachel has a lot more to think about now as she visits each of their hometowns. Find out what’s next on The Bachelorette 2017 right here, with some Bachelorette 2017 week 8 spoilers.

After last week’s romantic Switzerland getaway, Rachel Lindsay found herself in a tough spot. She seems to find something attractive in each of her suitors and is a little nervous about her hometown visits to meet their families. Rachel has traveled the world with her potential Mr. Right and is now heading back to the U.S. to meet and learn more about each of their families. As more drama unfolds after the hometown dates, Rachel must break yet another guy’s heart. If you can’t wait to watch it on TV, we’ve got The Bachelorette 2017 week 8 spoilers for you, right here! Read on to know more about what will happen on The Bachelorette 2017, and who will ultimately win The Bachelorette 2017.

Rachel Will Stand by Eric’s Side

Eric Bigger is a charming young man, whose smile has melted Rachel’s heart. Rachel and Eric visit his hometown in Baltimore, where she finds out what he had to go through to get a college education and pursue his dreams. Rachel is impressed with Eric’s candor, strength, and ability to overcome many obstacles, but is also nervous as she is the first woman he has brought home to meet his family. Will the emotional side of Eric take the better of him, or will he manage to open up to Rachel about his feelings for her?

Also Read: Dr. Bryan Abasolo from “The Bachelorette:” Wiki & Everything You Need to Know

Bryan Abasolo’s hometown, Miami, has Rachel excited and the couple visit the famous Calle Ocho, where they try salsa dancing, munch on street food, and play dominoes. The fun doesn’t seem to stop, until Rachel is bothered by the fact that Bryan’s mother might not approve of her, seeing as her disapproval was the reason his last relationship ended. Rachel puts her best foot forward to convince Bryan’s suspicious mother that she would be a great daughter-in-law. But will Bryan’s mom approve of Rachel? Or will he be the next to go?

The next stop is Madison, Wisconsin, where Rachel will meet up with Peter Kraus’ warm and welcoming family and friends. It looks like Peter still has some issues to work through and is not able to fully open up to anybody. After last week’s episode and Peter revelations about his ex-girlfriend, fans wonder if he is truly over her. And based on the preview, it doesn’t look like Peter’s mom believes he is ready. Will Rachel’s private talk with Peter’s mother prove to be problematic? What does Peter’s mom reveal about him? There’s only one way to know for sure!

Finally, Rachel goes to Aspen, Colorado to meet Dean Unglert’s family. But there is something else in store for her. Dean reveals that he and his father have had troubles in the past. After the death of Dean’s mom, his father pulled away from his youngest son, and the two have not been in touch for a long time. Dean is unable to hide the fact that he is nervous about the hometown dates, but Rachel stands by him and is understanding. The father and son confront each other as Rachel and the rest of Dean’s family members leave the two alone. What happens next will be seen on the next episode of The Bachelorette and things seem to get pretty intense, with Dean in tears.

Also Read: Lee Garrett from “The Bachelorette:” Wiki & Everything You Need to Know

After very emotional visits to the hometowns of her four remaining suitors, Rachel returns to her hometown Dallas, for a crucial Rose Ceremony. She will bid a very painful adieu to one of the men, but will have no time to recover as she takes the remaining three to Rioja, Spain. Who wins The Bachelorette 2017? Rumor has it that it’s Bryan who comes out on top, but nothing can be confirmed as of yet! Do not miss the next exciting episode of The Bachelorette 2017. Watch the drama unfold on July 17, 2017, at 8:00 p.m. EST on ABC.