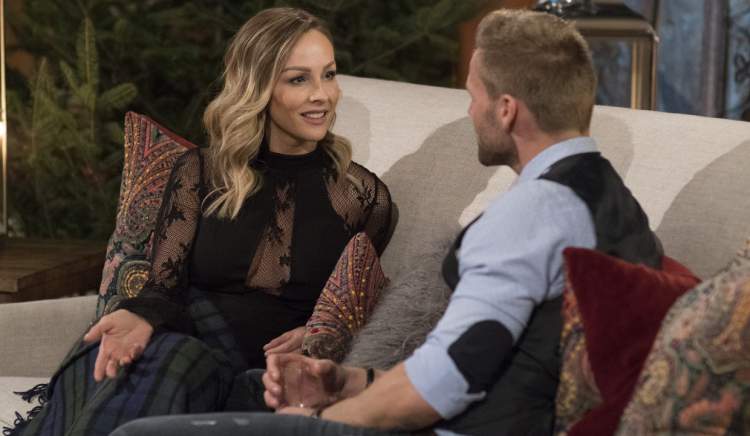 By the end of The Bachelor Winter Games, spoilers suggest that fans can expect to see somebody get down on one knee and pop the big question!  Read on to find out more about it!

This week, fans can expect a lot of surprises. According to the show’s Twitter page, there is a high chance that two of the contestants will get engaged!

Although there is a lot of flirty banter going on in the house, it seems to be serious for one couple. One tweet teased a photo of an engagement ring designed by Neil Lane.

One of The Bachelor Winter Games took to Twitter and somehow came up with the theory that the engaged woman is none other than Clare Crawley.

If you take a look at some of Clare Crawley’s Instagram photos, you may notice that she is wearing a similar gold band on her little finger! If Clare is the bride-to-be, then who proposed to her?

Last week’s recap shows that Clare found herself in a love triangle between Germany’s Christian Rauch and Canada’s Benoit Beausejour-Savard. She dumps Benoit, who was heartbroken and left the show. However, fans still have hope that Benoit ended up with the girl!

But there is still a possibility that an entirely different couple may have good news to share. Well, we will probably need to wait for The Bachelor Winter Games finale to know exactly who got engaged!

The Bachelor Winter Games‘ Twitter account continued to stir the pot of speculation with a clip of Benoit and Clare’s breakup. Does this mean that Benoit is planning to make a comeback on the show? And will Clare realize that she has feelings for him?

Don’t forget to watch the final two episodes of The Bachelor Winter Games this Tuesday and Thursday at 8:00 p.m. EST on ABC to see which couple might just get their happily ever after!