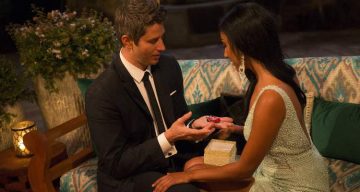 Gather ye Bachelor Nation! It’s time to pick favorites. Eight women have already bid farewell to Arie and the Bachelor mansion. Who among the remaining Bachelor 2018 contestants are the frontrunners? We’ve got spoilers from The Bachelor 2018 right here.

Stop whatever you’re doing Bachelor Nation. We began 2018 with some annoying dating antics all for Arie Luyendyk Jr. Happy New Year everyone! Not so happy for a few ladies who were not only stung seeing the newly crowned villainess get the First Impression Rose, but were also sent home. So now we have 21 hopefuls to be Arie’s fiancée. Who among them wins The Bachelor 2018? We’ve got some spoilers after Week 1 right here.

The Bachelor season 22 began just like any other premiere in the franchise. Arie wonders what love is, eye-roll inducing limo arrivals, lame pick-up lines, general interrupting and re-interrupting, lots of Laurens, and roses!

We begin judging these women from their limo arrivals and, as usual, they never disappoint. There were a lot of jokes on Arie’s racing background and real estate job. Brittane got him a “nice butt” sticker, Ali asked him to smell her armpit, and Bekah M. rolled up in an envy-worthy Mustang. But none of these ladies make our cut.

The best limo arrival goes to Becca Kufrin. She kept her entrance a little more traditional by getting a preemptive proposal from Arie. Like, literally!! She gave him a fake ring box, got him to go on one knee, and made him ask, “Are you ready to do the damn thing?” Sure, forcing a man to propose is a little iffy, but this is Bachelor people! You go big or go home! Arie had to quip that he’s never done this proposing thing before.

According to the Bachelor Nation gossip mill, Becca K. makes it to the Hometown Dates in the top 4. If Reality Steve is to be believed, she’s getting a real proposal out of Arie at the end of this. Her blunt proposal makes Becca the early frontrunner from Week 1.

A preview for Week 2 shows Becca on a super-luxurious date with Arie which involves a fancy mansion, haute cuisine, and designer duds.

What girl doesn’t want to try on designer gowns in a mansion?! This surprise from next week’s episode is majorly WOW-worthy, presented by @Olay Whips! Don’t miss more #BachelorWOWmoments on our Instagram Story tomorrow, hosted by @Ashley_Iaconetti!

The Villain Takes the Crown

Once we’ve got the limos and racing jokes out of the way, the ladies are scrambling for some one-on-one time with Arie. Single mom, Chelsea snags him first and gives off a villainous vibe the entire night.

For starters, she would rather not bring up her kid after mentioning him in an introductory video. During their one-on-one, she tells Arie she’s mysterious and leaves it at that. And when Maquel interrupts her, Chelsea figuratively implodes.

She fumes because she couldn’t come up with Brittany T’s genius plan of racing kid-sized cars. She’s also seething when Brittany got the first kiss of the season, and can’t play a ukulele as well as snags.

She “reinterrupts” — it’s Bachelor lingo courtesy of Corinne Olympios, get with it— his time with sweet and good-hearted (at least so far), Krystal. While she’s telling Arie how she’s not rude or competitive, the other ladies are not liking that she gets another chat with him and are already flagging her “aggressive” behavior.

Chelsea couldn’t care less though. Because she’s not here to make friends and she stole the second kiss of the season. Her forthright style is a hit with Arie who gives her the First Impression Rose. Cue more scowling women.

But if we’ve learned anything from the franchise’s past villains, they tend to stay longer. Nevertheless, Chelsea, like her villainous predecessors doesn’t look like a strong contender.

That moment when you realize you dislike Chelsea, so that means she’s probably gonna be in the finale #TheBachelor pic.twitter.com/oKnegcnHC9

At the end of the night, Amber, Jessica, Brittane J., Ali, Bri, Lauren J., Nysha, and Olivia didn’t get the rose and were sent home. 21 women, including Chelsea and Becca, left a lasting impression on Arie. Only time will tell how they pick up from Week 1.