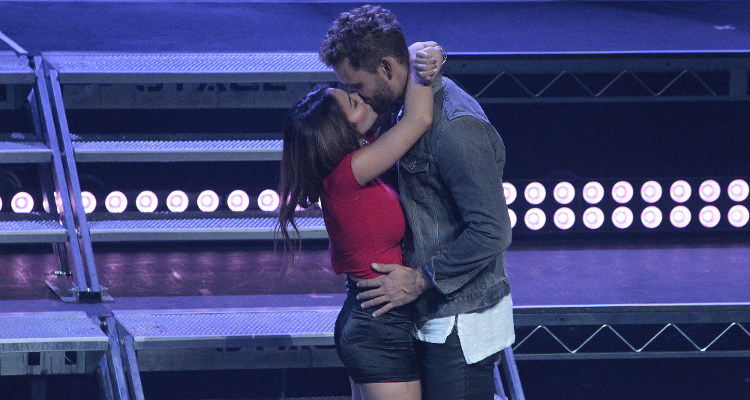 The Bachelor season 21 is off and running. Tonight’s episode saw plenty of high-voltage drama with Nick Viall taking the remaining women on a road trip to his hometown in Wisconsin, and spending some quality time with his family.

Just when you thought that things couldn’t get any more dramatic on The Bachelor, the show’s producers sprung more surprises in tonight’s episode. Fans of the hit dating series watched episode 4 of The Bachelor with their jaws dropped so low, they practically touched the ground. This season’s bachelor is Nick Viall, a 36-year-old software salesman from Waukesha, Wisconsin who is on his journey to finding his perfect bride. The thrice-rejected reality star is currently facing flak in what is being described as the “raunchiest” season of The Bachelor ever. As the competition narrows down to only 15 contestants, claws are beginning to come out as catfights erupt and The Bachelor contestants question why Nick is really on the show. Scroll down to find out all the juicy gossip in The Bachelor recap, including who got eliminated on The Bachelor tonight as well as exciting The Bachelor spoilers 2017.

The Bachelor Episode 4 Recap: Brittany and Christen Are Sent Packing

Last week’s episode of The Bachelor ended with the women furious at Nick after seeing him getting intimate with resident villain Corinne in a bouncy castle during the pool party. Vanessa Grimaldi, The Bachelor season 21’s alleged frontrunner, confronted Nick about his motives and asked him to explain whether he was serious about settling down or if he is there simply to have fun. Visibly embarrassed, Nick muttered an apology saying, “Listen, I get it. I want you to let me know when you’re pissed off and mad and want to hit me in the face. I very much give a s**t about what you say and think about me and my actions.” Well, let’s hope Nick meant what he said because he has a bevy of 15 beautiful women vying for his attention, and they’re all getting pretty impatient with his immature behavior!

During the much-awaited rose ceremony, a somber Nick eliminated Christen Whitney and Brittany Farrar. Elsewhere, Sarah and Taylor woke up sleeping beauty (Corinne), whose nanny Raquel seems to have nap time penciled in for her. A heated exchange ensued with the duo ganging up on Corinne, calling her entitled, to which the millionaire business empire heiress haughtily responded, “I’m not privileged in any way, shape or form.” Well…if the shoe fits! 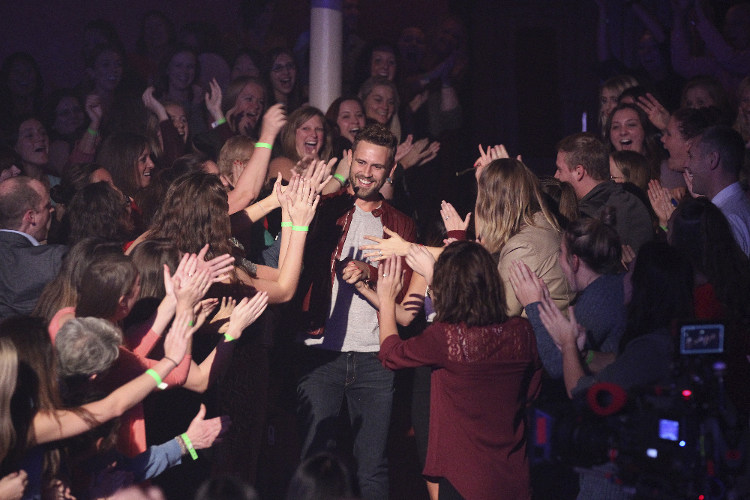 After the initial shock of the rose ceremony had worn off, The Bachelor host Chris Harrison announced that the remaining 15 women would be heading to Nick’s hometown to spend some time with his family. We already know that Nick is extremely close to his huge family, and is the second oldest of 11 siblings. Nick’s doting parents, Chris and Mary Viall, sat down to have a talk with their son over coffee as he got them up to speed with his search for his prospective wife. After confessing that he was feeling guarded but connected to some of The Bachelor contestants, Nick declared that he was “as ready as I’ve ever been” to settle down. Being the caring mother that she is, Mary broke down in tears as she worried her son had been single for too long, and was too jaded to find love. Nick’s father also piped in, sternly telling his son that he didn’t want to see him on The Bachelor after season 21 had concluded.

Also Read: ’The Bachelor’ Spoilers: What Will Happen in the Next Episode?

As the dates commenced, Nick announced that Danielle Lombard, the 27-year-old nail salon owner, would be getting some one-on-one time with him. Then the duo headed to a neighborhood bakery for some cookies with Nick’s face on the icing, when his ex-girlfriend casually strolled in. Apparently, Amber and Nick dated for a few months a long time ago and hadn’t seen each other in forever, until she just happened to be walking past the bakery. Although, she couldn’t resist cashing in on 15 minutes of fame, the happily married Amber who is now a mother, told Danielle that Nick is “heart-driven” before wishing them luck and disappearing away into oblivion.

Catching up at a Chris Lane Concert

Nick and Danielle L.’s date went swimmingly well as the pair took a romantic walk in the park and got to know each other better. The conversation took on a tone of nostalgia when they exchanged fond childhood memories of first crushes, kisses, and losing their virginities. After sharing a passionate kiss, Nick and Danielle L. headed to a bar for drinks where she confessed that her parents divorced when she was just 17, and it had made her more “guarded” about relationships. Nick seemed to be happy that she opened up, and gave her a rose before treating her to a surprise concert by none other than rising country star Chris Lane. Amid the deafening cheers of the excited crowd, Nick and Danielle L. swayed to Lane’s chart-topping singles “Fix,” and “For Her,” from his upcoming album Girl Problems. 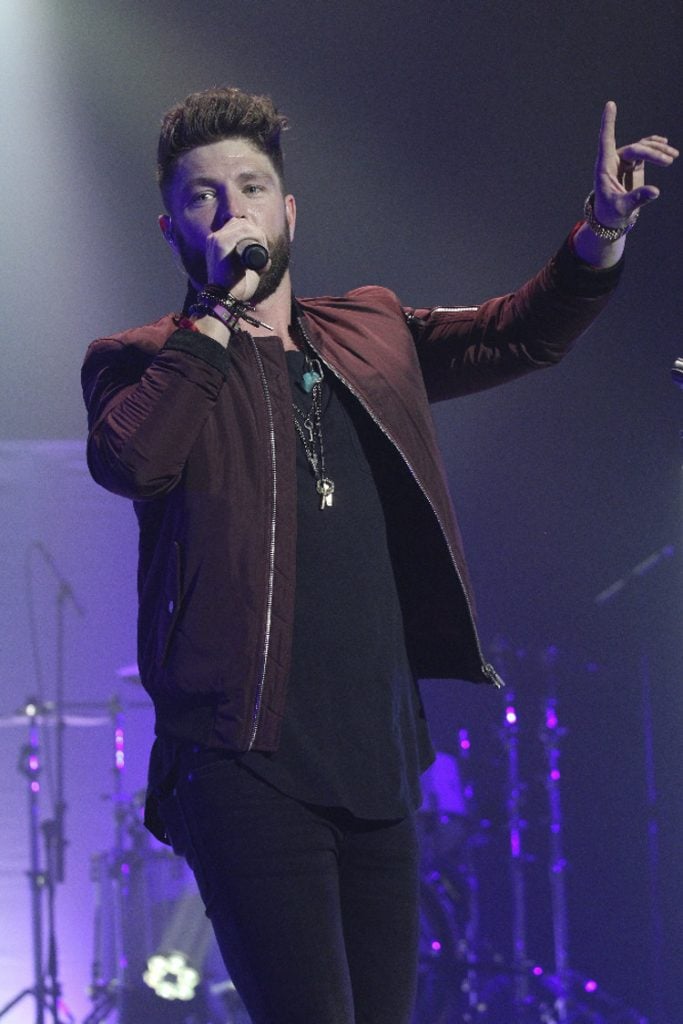 After a successful one-on-one date with Danielle L., a happy Nick headed on his group date with Rachel, Alexis, Vanessa, Jasmine, Jaimi, Sarah, Whitney, Kristina, Astrid, Taylor, Josephine, and Danielle M. The Bachelor gang visited a farm where they milked cows and shovelled cow dung which drew some interesting responses from the some pretty disgusted contestants, especially Corinne. Trying to make amends for her behavior later, Corinne claimed that she “respects” shoveling “poopie” although the other women found it hard to believe, considering that she has a nanny who does everything for her.

Meanwhile, the remaining Bachelor contestants ganged up on Corinne, calling her immature, to which she thoughtfully responded by clutching her chest and insisting that she was “a good person.” Moreover, the small business owner launched into a metaphor about corn, referring to herself as “juicy” and “buttery,” and even admitted to knowing that she wasn’t “everyone’s favorite person.” Good for you, Corinne!

Soccer, Skating, and Playing the Field

The Bachelor season 21 episode 4 also showed Southern Belle Raven Gates’ one-on-one date with Nick. The 25-year-old Arkansas native is a frontrunner this season and seems to have won over Nick’s heart already. Nick and Raven attended his adorable little sister’s soccer game and had a chance to make small talk with his conservative Catholic parents. Following the game, they headed to Skateland where they had a great time. The date also gave Nick’s sister Bella a chance to interact with Raven, and ultimately declared the boutique owner to be “funny,” “pretty,” and “nice.” Awww, isn’t that sweet?

Later, things got pretty serious when Raven told Nick about the time she caught her ex-boyfriend cheating on her. Not one to take nonsense from anyone, Raven beat her ex on the head with the other girl’s stiletto! Justifying herself, Raven simply stated, “If someone can’t value me the way I should be valued, then they’re not worth my time.” Nick seemed to like her honesty and outspoken nature and gave her a rose at the end of their date.

Last but not the least, episode 4 ended with the pre-rose ceremony cocktail party where Danielle L. got greedy and stole Nick for a quick chat right under Taylor’s nose. If you were hoping for a showdown between Taylor and Corinne—who as everyone knows by now, are this season’s arch rivals—you’re in luck, because the two really got into it towards the end of the episode. Taylor, the 23-year-old mental health counselor, called Corinne “an emotional infant,” while Corinne retaliated with her classic line, “I run a multimillion-dollar company.” At this rate, next week’s two-on-one date with Nick, Corinne, and Taylor is definitely going to be worth a watch! Make sure you don’t miss The Bachelor season 21 episode 5 airing next Monday, January 30, at 8:00 p.m. only on ABC!