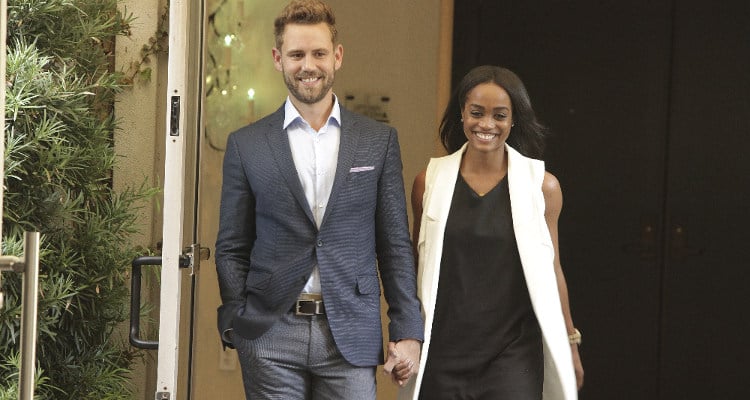 Get ready for the most exciting anticlimactic episode The Bachelor has ever seen next week. Nick Viall is just two episodes away from revealing the winner of The Bachelor 2017 and here are some new spoilers for episode 10!

The Bachelor season 21 is rounding up to an explosive finale scheduled to air in a week. The 36-year-old former software salesman has shortlisted his prospective brides and has reached the most difficult part of his journey so far. After narrowing down the 30 beautiful women to three, Nick is faced with the daunting task of eliminating one more woman next week before announcing his top 2 picks for season 21. His four finalists were Corinne, Rachel, Raven, and Vanessa. But before jetting off to Finland, he had to send one unlucky bachelorette home. Not surprisingly, this season’s villain and spoiled rich girl, Corinne was sent packing. Nick seems to have gotten serious about choosing a bride, and he is happy with his final three contestants. Keep reading to find out some juicy The Bachelor episode 10 spoilers, including what happens in The Bachelor finale!

Last week’s episode of The Bachelor ended with an unexpected visitor at Nick’s doorstep, who turned out to be none other than the season 10 Bachelorette, Andi Dorfman. After building up the suspense to a breaking point, it was revealed that the still-single Andi was not there to take Nick back, but to give him some friendly relationship advice. The startled Nick eventually opened up to his former flame and shared his fears of ending up alone yet again. Before he embarked upon the much-awaited Fantasy Suite dates, Andi advised the thrice-rejected Bachelor alum to give it a go with all three bachelorettes, saying he was “entitled to do whatever you want,” because they were all consenting adults.

After apologizing to Andi for airing their dirty laundry in public during their reunion episode, Nick said goodbye and settled down for the dreaded rose ceremony. Corinne, the 24-year-old multimillionaire heiress, was finally sent home in a limo, where she sobbed her eyes out and eventually fell asleep — but not before proclaiming that she was done trying to please men. We’ll miss you, Corinne! 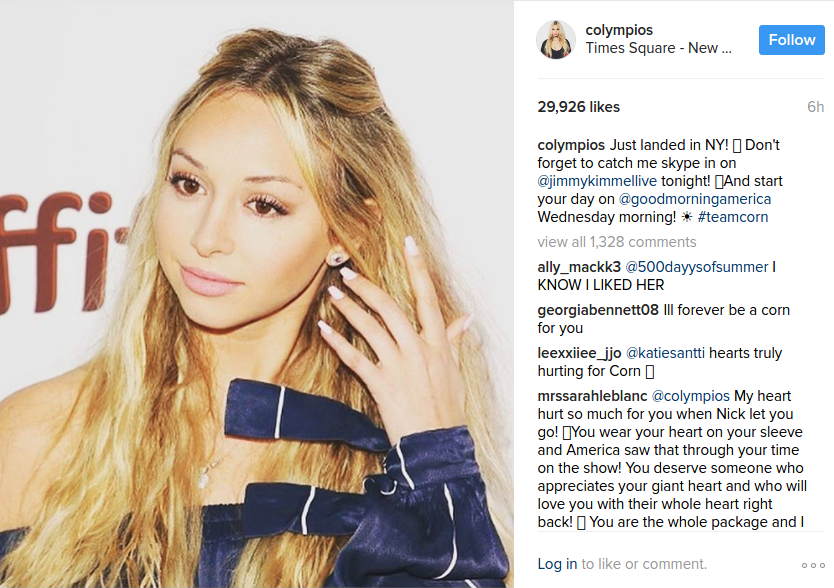 Viewers were left disappointed after episode 9 of The Bachelor because it featured only one of the three overnight Fantasy Suite dates! The hour-long episode showcased Southern Belle Raven Gates heading off on a romantic date with Nick. While on their date, she revealed to Nick that she had never been with a man other than her ex, or achieved “complete satisfaction.” The demure Raven confessed her true feelings of love to Nick and happily accepted the Fantasy Suite card. The Bachelor episode 9 ended with the loved-up duo passionately kissing on the bed, against the picturesque backdrop of the Northern Lights.

The Bachelor episode 10 spoilers promise to have viewers glued to the edge of their seats, wondering what happened between Raven and Nick on their overnight date! Did they or didn’t they? As always, ABC likes to play things up and the boutique owner from Hoxie, Arkansas is seen happily skipping around and high-fiving strangers in The Bachelor’s week 9, part 2 promo. The 25-year-old brunette is visibly ecstatic as she pets a dog and makes snow angels after confessing that, “Nick is a man of his word.” It definitely looks like someone had a great night! 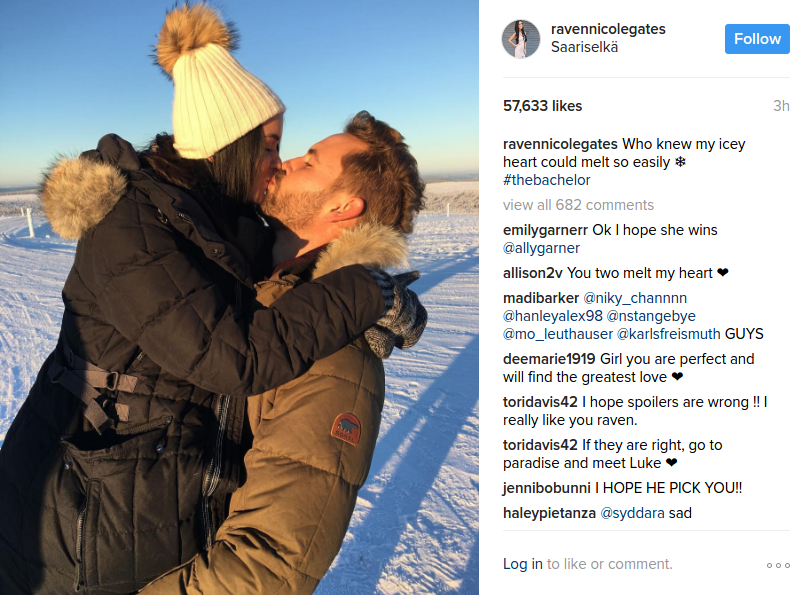 Heating Things up: Fire, Sauna and Some Hot Tub Action!

Predictably, Nick’s time with the remaining Bachelor contestants—Rachel, Raven and Vanessa— will include super-romantic dates in the exotic icy locales of Lapland, Finland. According to Bachelor blogger Reality Steve, The Bachelor in Paradise star will head off to a reindeer farm with Rachel and have an intense heart-to-heart about their possible future. Since the 31-year-old Dallas-based lawyer has already been signed on as ABC’s first African-American Bachelorette, it comes as no surprise that she will be bidding Nick farewell next week, before embarking upon her own journey in search of true love.

Moving on, Vanessa Grimaldi has been a front-runner on season 21 of The Bachelor since episode one, when Nick first laid his eyes on her. The two have developed a strong connection and share an undeniable chemistry. The second half of The Bachelor episode 10 will feature Nick and the 29-year-old special education teacher from Quebec, getting warm and wet in a steaming sauna and hot tub. The attractive pair will get to know each other better as they share their concerns about traditions and compromises in a relationship. Since Vanessa lives in Canada, the couple faces the inevitable challenges of a long distance relationship, with doubts about how they will split their time. It looks like things are getting pretty serious between the two! 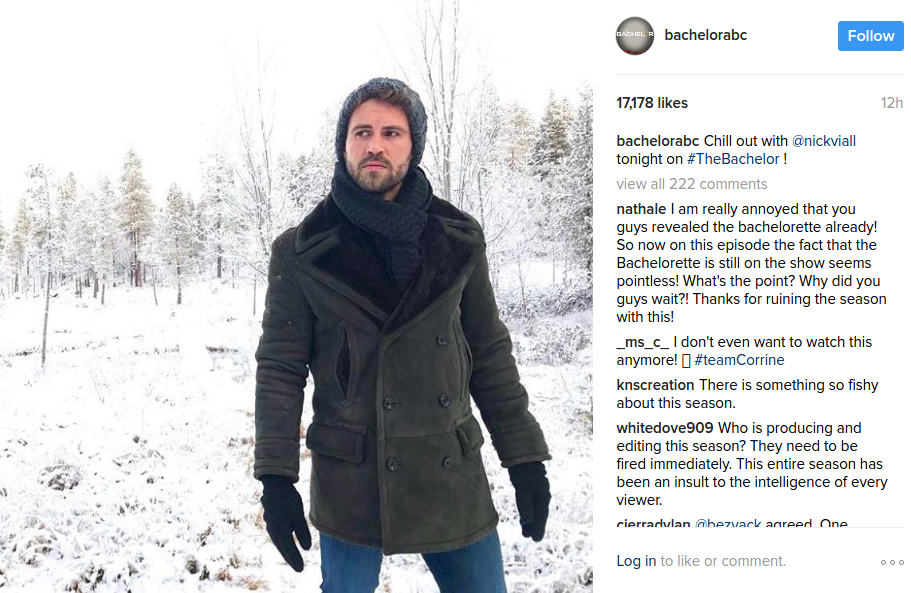 The Women Tell All Special: Get Ready for Some High-Voltage Drama!

Next week’s episode of The Bachelor will feature some emotionally-charged scenes, as Nick navigates the murky waters of love and relationships. He will be torn between Vanessa and Raven, both of whom have their last shot at changing his mind before The Bachelor finale episode on March 13. Similar to tonight’s episode, The Bachelor episode 10 will also be an hour long, before the exclusive The Women Tell All special airing on March 6. Tune in to check out some funny Bachelor bloopers, as well as the unfinished business between The Bachelor season 21’s arch rivals, Corinne and Taylor!