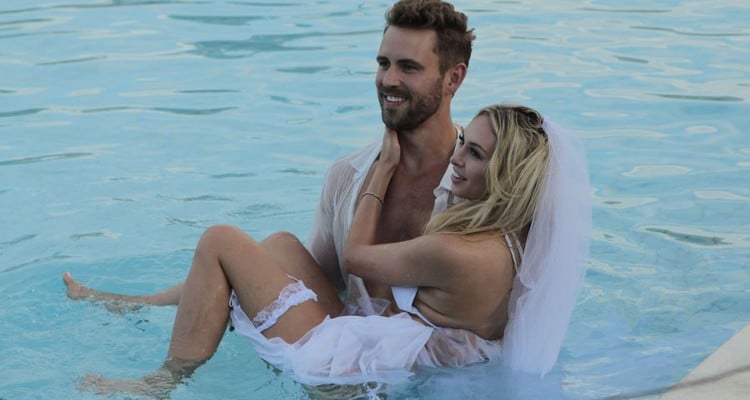 Now that only 12 ladies are left on The Bachelor, Nick will soon have to choose the love of his life. Speculations about the final four and The Bachelor winner have surfaced and many are wondering if this season’s “villain” has a chance. Does Corinne win The Bachelor? Find out here.

The fifth episode of The Bachelor aired last night, and we finally got to witness the first two-on-one date! For the group date, Alexis, Jaimi, Josephine, Raven, Whitney, Danielle L, Jasmine, Kristina, Vanessa, and Danielle M went to a haunted mansion with Nick Viall.

Rachel Lindsay was the lucky lady chosen to go on the one-on-one date with Nick. They hit the streets of New Orleans, explored the city, had some beignets at Café du Monde, and danced in a parade.

During the two-on-one date, Corinne, Taylor, and Nick went to the bayou. During her alone time with Nick, Corinne decided to tell him that she was feeling bullied by Taylor, and explained what happened during the confrontation between them. By the end of their date, Nick gave Corinne the rose, proving that maybe she’s smarter than we think. Watching Corinne get a rose each week raises the question: does Corinne win The Bachelor?

We have a few spoilers about episode 5 of The Bachelor, so we suggest you stop reading if you are not caught up. Nick, Corinne, and Taylor went to the bayou for a tarot card reading. At first, Corinne was disgusted with the swamp, but perked up when she noticed a voodoo doll, and asked the tarot card reader how to make one for a specific person.

Nick left the girls alone for a bit, and of course, their arguments continued. Corinne told Taylor, “I can’t even believe that you’re a mental health counselor. It blows my mind that people take advice from you.” To which Taylor replied, “It blows my mind that you run a multi-million dollar company!”

During Taylor’s time with the tarot card reader, Corinne tried to gain Nick’s sympathy by telling him that Taylor mentally attacked her and questioned her intelligence.

Whatever she said must have worked, because at the end of the date, Nick decided to give Corinne the rose and they left the bayou together, leaving Taylor alone with the bugs. So, Corinne from The Bachelor does not go home after episode 5.

Corinne was Spotted with Bling on Her Ring Finger

One of us is a Bachelorette contestant and the other has a nanny.

Recently, Claudia Oshry uploaded a photo on her Instagram with Corinne, who is seen wearing what looks like an engagement ring! But is Corinne engaged to Nick? Simply put, the answer is no. Claudia said, “[Corinne and I] were hanging out Friday night and, since I just got engaged, I was letting everyone try my ring on. We were having so much fun, taking photos, drinking – we didn’t even realize until every web site was calling me and writing it up! No spoilers here, just a funny mixup!”

Who are the Final Four?

In the coming weeks, we will see eight of the 12 ladies go home, and then it will be down to the final four. The ladies who are rumored to make it to this round are Corinne Olympios, Rachel Lindsay, Vanessa Grimaldi, and Raven Gates. The only thing they all have in common is their desire to win Nick Viall’s heart. Reality Steve reports that the winner of the show will be Vanessa, but again, it could be anyone’s guess at this point!

Fans are shocked that Corinne has made it this far in the show, and hearing that she could very well make it to the final four is downright shocking. Corinne is expected to be eliminated before the overnight dates and Rachel is said to be eliminated after the Fantasy Suites, making the final two Raven and Vanessa. The final rose ceremony is rumored to take place in Finland, and will apparently leave Raven heartbroken.

Also Read: The Bachelor 2017 Spoilers: Get Ready for 3 More Eliminations in Week 6!

It is speculated that Nick is taking acting classes in L.A. and there is a good chance that he will appear on the next season of Dancing with the Stars. Nothing has been confirmed yet, so we will just have to wait and see! Whether or not Nick and Vanessa are still engaged (if they ever were), this show could definitely give a boost to not only Nick’s career, but Vanessa’s too!

Find out what happens next on The Bachelor next Monday, February 6 at 8:00 p.m. EST on ABC.