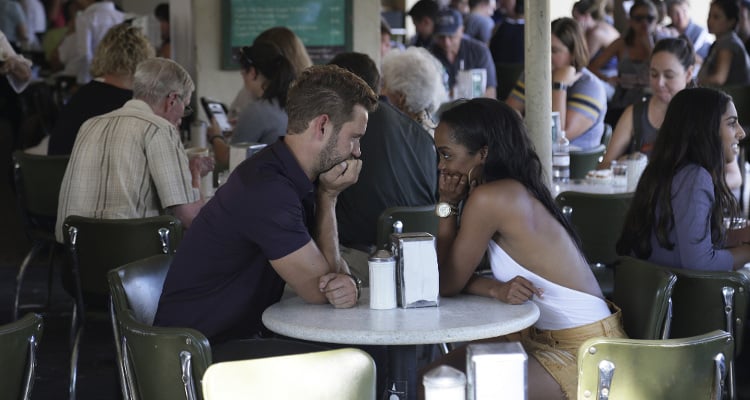 Season 21 of The Bachelor has been described as one of the “most addictive” seasons in the history of the show. Nick Viall has his work cut out for him as he narrows down his hunt for the perfect wife, with only 12 contestants left in the game!

This season’s leading man, Nick Viall, is a three-time-rejected Bachelor alum, who’s hoping to finally find his happily ever after. The former software salesman from Waukesha, Wisconsin has made strong connections with multiple women on the show, but it seems like the strongest contender is Rachel Lindsay. The Dallas native received the coveted one-on-one date in New Orleans, after making history as the first black woman ever to win the first impression rose in the season premiere. In last night’s episode, die-hard Bachelor fans witnessed action-packed drama, as the remaining women headed off on a group date to a haunted plantation in New Orleans. Meanwhile, archenemies Corinne and Taylor faced off during an incredibly awkward two-on-one date that made Nick “anxious.” We can’t say we blame him after seeing the feuding duo go at each others throats in a major swamp showdown. In case you missed out on the action, here is The Bachelor episode 5 recap, including some juicy spoilers for week 6 of The Bachelor. Find out who got eliminated tonight, and who became a frontrunner!

The Bachelor Week 5 Recap: Taylor was Left Stranded-But We Haven’t See the Last of Her Just Yet!

The never-ending drama on The Bachelor season 21 continued as tensions continued to rise between multi-millionaire heiress, Corinne Olympios and mental health counselor, Taylor Nolan. Unfortunately for Taylor, Corinne spent her alone time with Nick convincing him that Taylor has been “bullying” her. Her tactic seemed to work, as Nick decided to give Corinne the date rose, leaving Taylor alone in the bayou. However, fans were left hanging at the end of the episode when Taylor decided she’s not leaving without voicing her opinion to Nick. The much-anticipated rose ceremony was postponed to next week’s episode, which will air on Monday, February 6.

Meanwhile, the other contestants got the fright of their lives while exploring a haunted plantation on a group date. The Bachelor season 21 frontrunner, and Nick’s fellow Wisconsin native, Danielle Maltby scored the group rose date, much to the dismay of Raven who accidentally dropped the L-bomb on Nick! At the beginning of episode 5, stunned viewers watched as Nick bid adieu to Astrid Loch and Sarah Vendal, bringing down the number of remaining Bachelor contestants to 13. After the shocking eliminations during the episode, the heat is bound to be turned up as The Bachelor inches closer to its season 21 finale!

The Bachelor Episode 6 Spoilers: Get Ready for Some Heavy-Duty Heartbreak and a Tear-Filled Group Date!

Spoiler Alert! According to the trusted Bachelor blogger Reality Steve, the headstrong Taylor has difficulty coming to terms with her elimination and returns to give Nick a piece of her mind. The 23-year-old Seattle native doesn’t take things lying down and confronts Nick over his decision to choose spoiled rich girl Corinne over her, but to no avail. A visibly frustrated Nick sticks to his guns after claiming that his “blood is boiling,” so much so that he even cancels the rose ceremony. It looks like emotions are running high after Nick tried to play referee, making a tough decision that later brings him to tears!

The Bachelor week 6 spoilers indicate that three more women will be sent home in the next episode. Reportedly, the unlucky bachelorettes are Alexis Waters, Jaimi King, and Josephine Tutman. Following their shocking elimination, the nine remaining women will head to the quaint Virgin Islands with one lucky woman getting a romantic one-on-one date invitation. The mysterious Kristina Schulman will receive a date rose, as she and Nick visit the Annaberg Ruins. The beautiful Kristina has been on Nick’s radar since the first episode, and her intriguing back story has The Bachelor fans dying to know more about her Russian roots. The 24-year-old dental hygienist hails from Louisiana, Kentucky, but revealed that she was actually adopted from a Russian orphanage as a young child.

Make sure you keep a box of tissues handy as the tears are bound to flow after next week’s emotional episode. While Kristina opens up about her heartbreaking background, six lovely ladies face off in a volleyball game as part of their group date. The Bachelor week 6 spoilers tease that the winning team (consisting of Vanessa, Danielle M., and Jasmine) get to spend some quality time with Nick. Apparently, things go south for one bachelorette as she decides to let it slip that she slept with one of Nick’s friends in the past! The woman in question is Jasmine, and her confession doesn’t seem to affect Nick too much, although he does decide to send her packing! Does The Bachelor drama ever end?

The Bachelor 2017 Spoilers: Who is Safe After the Virgin Islands Shocker?

The drama and suspense will only continue to build as the remaining Bachelor contestants dwindle down to single-digits. The show’s millions of viewers are in for some more shockers as the group heads to the Virgin Islands. Apparently, there is another two-on-one date in the works, and Reality Steve alleges that Whitney and Danielle L. will take a helicopter ride to a private island with Nick. Things don’t go well for the trio, as Nick ends up sending both the women home in a shocking double elimination!

Following the frustrating two-on-one date, Nick starts sobbing uncontrollably, worried that he may never find the right girl. Then, The Bachelor season 21 villain sneaks off to his room in the dead of night to console him, which we’re guessing doesn’t make her popular among her fellow Bachelor contestants. That’s all the spoilers we have for you folks for now! You’ll have to watch next week’s episode to find out the rest!