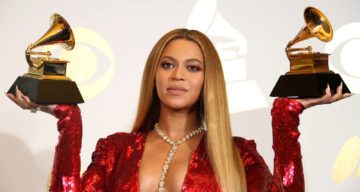 Singer Beyonce poses in the press room with her awards for Best Music Video for "Formation" and Best Urban Contemporary Album for Lemonade" at The 59th GRAMMY Awards at Staples Center on February 12, 2017 in Los Angeles, California. (Photo by Dan MacMedan/WireImage)

Move over Taylor Swift because Queen Bey is back to reclaim her crown. Beyonce’s new album, Lemonade, has landed her on the Billboard Hot 100, thanks to her Lemonade lyrics. Beyonce’s Lemonade song list reveals stories of betrayal, success, empowerment, and pain. But instead of feeling sorry her herself and singing songs that are overly sappy, she decided to own her emotions and be angry and powerful.

These new songs mark the change to a new Beyonce—someone who’s tired of being quiet and submissive or apologetic about her power and success. Though all songs on her new album are good, here are three lyrics that we picked as the best from Lemonade.

“Six inch heels, she walked in the club like nobody’s business/Goddamn, she murdered everybody and I was her witness.”

This song featured Canadian singer The Weeknd and was a song about empowering women to earn money for their families, turning struggle into success.

“Who the f*ck do you think I am?/You ain’t married to no average bitch, boy.”

This is one of the songs that allude to Jay Z’s infidelity. Bey’s reminding him that his wife isn’t average and that she’s no longer putting up with his behavior. (We hear you, Bey!)

“He only want me when I’m not there/He better call Becky with the good hair.”

Since Lemonade was released on Tidal, this lyric has been the most searched, meme’d and discussed out of the entire album. Everyone still wants to know who Becky is and why Jay Z could have cheated. The Beyhive even attacked Rachel Roy on social media after suspecting her of being the other woman.