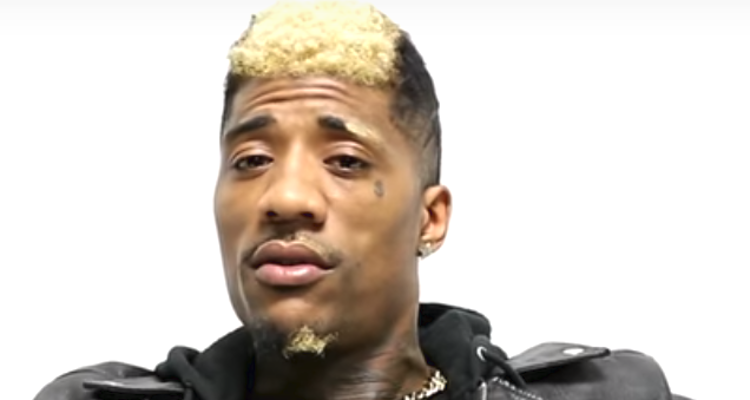 A lot of drama unfolded on the last episode of Love & Hip Hop: Hollywood, with two ladies fighting over rapper Solo Lucci. Who is Solo Lucci? Take a look at our Solo Lucci wiki for everything you need to know.

Solo Lucci is currently gaining a lot of attention on Love & Hip Hop: Hollywood. The fourth episode, titled “Got Swag?,” featured Alexis Skyy at a photoshoot for Nikki Muddaris’ line, Nude By Nikki, when Solo Lucci’s ex and baby mama, Sara, pops in from Atlanta to give Alexis a piece of her mind.

Things between the two heat up quickly and Nikki had to ask security to escort Sara out. It looks like Lucci has a lot of explaining to do! Solo Lucci has appeared on Love & Hip Hop: Hollywood quite a few times, and has earned a lot of attention thanks to this latest development. Keep reading to learn more about the rapper.

Born on April 14, 1995, in Fort Worth Texas, Solo Lucci’s age is 22. He moved to Atlanta to pursue his dream of becoming a rapper.

Why Did Solo Lucci Become a Rapper?

Lucci worked hard and was determined to make it in the industry, and was influenced by artists like Tupac, UGK, and Swisha House.

In fact, Tupac’s songs made a huge impact on Lucci, whose first single was “RIP Tupac.” He is known for his lyrics and, according to him, rapping is all about generating proper relationships.

Lucci released a lot of songs throughout his rapping career, with “RIP Tupac” garnering around half a million views. Following the hit single, Lucci released an album in 2013, F**k Your Favourite Rapper, which has songs like “PSA,” “Catch a Body,” and “HYFR.”

In 2014, Lucci collaborated with Akon in “Killaz & Drug Dillaz,” and released his mixtape, Life after Death, shortly after.  His songs are available on Spotify, Apple Music, and Google Play. His song “Whip It” has earned him a lot of followers and went beyond one million views on SoundCloud. Lucci’s latest single, “Too Damn Fine” is currently available online.

Lucci is currently dating Alexis Skyy who both appear on the reality show, Love & Hip Hop: Hollywood. He dated Sara Scott for almost four and a half years, and has a child with her. On the show, Sara spoke about her relationship with Lucci and the beef she has with his current girlfriend to Masika Kalysha. “Actually, Alexis started dating my child’s father,” Sara said, adding, “Her [Alexis] whole purpose for coming here to LA was to confront you, and she did the same the same thing to me times ten because she was actually around me and my child’s father and we worked together prior to that — so she knew who I was, she knew my relationship with him.” Sara was heartbroken because Lucci said they would raise their son together in L.A., but he ended up leaving her, and eventually started stating Alexis.