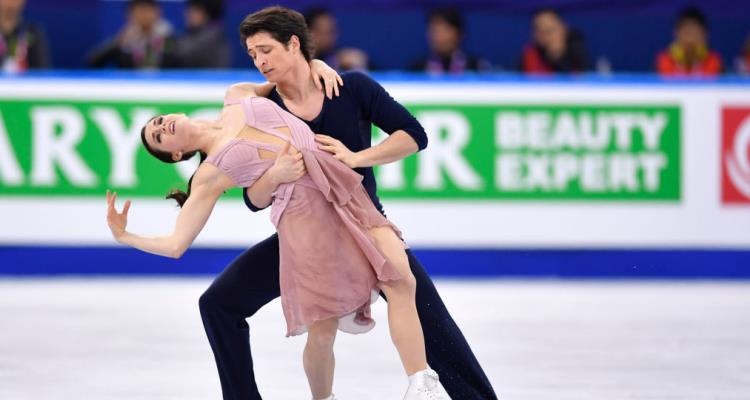 Coming straight from the horses’ mouths, Scott Moir, 30, and Tessa Virtue, 28, admittedly share a very “complicated” relationship. It’s to the point where even the longtime professional figure skating partners themselves have a hard time defining the dynamics of their unmistakable rapport! One thing’s for sure, though: they definitely have a strong, almost intangible connection of some kind, which has had fans guessing about their relationship status from the start.

When it comes to directly answering such prompting and straightforward questions from their adoring fans, the skating duo has been suspiciously evasive and coy on the matter. They’ve both described their 20+ year union as being far too complex and intricate to define using conventional labels.

Moir has said that he and Tessa are constantly asked about the dynamic of their relationship. He said, “People always ask ‘Are you like brother and sister? Are you like a married couple?’ It’s really original and can’t really be explained.”

During a recent interview with Maclean’s Magazine, Moir and Virtue went into further detail describing the foundation and nature of their relationship: “We’re always telling stories, we’re supposed to be reacting, a man and woman on the ice, it’s romantic. What we have is such a cool relationship. It’s more about a friendship, our working relationship is so strong. We take so much pride in that.”

That concise and well-articulated statement makes the whole situation seem pretty cut-and-dry. There you have it, folks! Scott Moir and Tessa Virtue are effectively not involved in a romantic relationship…or so they say.

Also Read: Are Hubbell and Donohue a Couple Off the Ice? Their On-Ice Chemistry Begs the Question!

Clearly, They Don’t Kiss and Tell

Obviously, there’s an intangible surge of chemistry between these two when they skate. Anyone with eyes can tell that there’s a special, inexplicable energy between the two of them that’s unparalleled even between their competitors!

There’s just something about Scott Moir and Tessa Virtue. It certainly has Canadian figure skating fans foaming at the mouth for them to admit that there’s an inherently romantic element to their relationship. Just admit it!

Is It All for Show?

In fact, there might actually be some hope for Moir and Virtue to elevate their relationship to the next level after they retire permanently. The figure skating couple allegedly shared an inadvertent passionate kiss during one of their 2014 practices, after Scott was slowly bringing Tessa down from a lift.

Was this truly an accidental kiss? Did they just get caught up in the moment or is there something really there between the two Olympic champions? They certainly do a great job of keeping us guessing!

Will They Or Won’t They?

Right now, it’s hard to tell for sure whether their working relationship and friendship will ever develop into something more, as the two are busy preparing to compete in the 2018 Winter Olympics once again!

According to Scott, he doesn’t “see that side of it” right now. However, Tessa and Scott did share some tender feelings for one another when they first met at the tender ages of 7 and 9, respectively.

As kids, they were even briefly ‘married’ for a time. But Scott put an end to that rather quickly by calling young Tessa on the phone and declaring, “Tess, I don’t want to go out with you anymore” right before hanging up on her! But that was when they were young and “cooties” were still likely a thing.

Luckily, they can laugh about this adorable incident now!