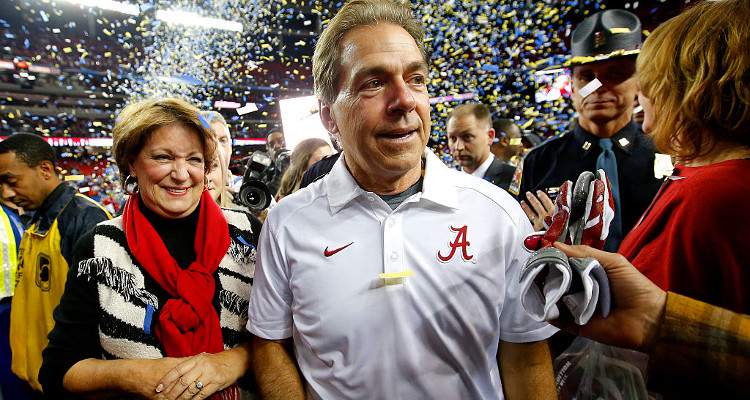 Alabama is in celebration mode! As Nick Saban’s team won against the Georgia Bulldogs at this year’s National Championship game, all eyes were on the coach, whose success in college football is unprecedented. Nick Saban is often full of praise for his wife, Terry Saban, who has been his support system for over 45 years. Keep reading to know more about Nick Saban’s wife.

Alabama Crimson Tide’s head coach, Nick Saban, is a fan-favorite in the Yellowhammer State. Saban transformed the team since his arrival in Alabama in 2007. With numerous titles under his belt, he went on to become one of the most successful college football coaches.

Terry Saban, Nick Saban’s wife, has been by her husband’s side throughout his coaching career, and he described her as a “great partner.” We have everything you need to know about Nick Saban’s leading lady in our Terry Saban wiki, so keep reading!

Terry Saban was born and raised in West Virginia. She worked as a teacher after graduating from college.

Often known in Alabama’s football circles as “Miss Terry,” she is very involved in supporting charities across the country. She and her husband founded Nick’s Kids, a charity to help children with mental disabilities. The foundation raised over $1.0 million in the first three years of Saban’s coaching stint in Alabama.

Terry Saban was all smiles donating coats to kids at Oak Hill school for Nick's Kids and the Knights of Columbus. #TerrySaban #NicksKids #KnightsofColumbus

Many people have posted pictures of Nick and Terry Saban on Instagram at football-related events.

So earlier this week, I had a chance to go over my game plan for tomorrow's Peach Bowl contest with Coach Saban. Mrs. Terry approved of all of my ideas and as you can tell, we were all happily in agreement with what we've come up with for Washington. No details shall be given here, other than to say: The Tide Shall Roll. #rolltide #nicksaban #terrysaban #msterry #teamwatkins #teamsaban #crimsontide

You’ll also find some of Terry Saban’s photos with people who were impacted by the couple’s generosity.

A University of Alabama student who received the Nick & Terry Saban First Generation Scholarship captioned a photo writing, “Upon meeting Mrs. Saban today I was truly set aback by her friendly and inviting presence at our table, she spoke to us in a sweet, warm tone as if we were her own children and grandchildren. I am incredibly grateful for the support Mrs. Terry and her husband have provided in helping me and my fellow recipients achieve our goals.”

Today I had the wonderful opportunity to meet with one of the people who has so generously funded hundreds of students in their pursuit for a higher education (including myself) through scholarship opportunities. Mr. and Mrs. Saban were both once small-town locals in West Virginia who wanted to be the first in their families to go to college and make something more of themselves. Today there are literally millions of people who know their names, all because they took that initiative. But they have not forgotten where they came from and how they got here, so through a true act of altruism they founded the Nick & Terry Saban First Generation Scholarship here at the University of Alabama, which works to provide aspiring students of all majors to take that first step to change their futures for the better. Upon meeting Mrs. Saban today I was truly set aback by her friendly and inviting presence at our table, she spoke to us in a sweet, warm tone as if we were her own children and grandchildren. I am incredibly grateful for the support Mrs. Terry and her husband have provided in helping me and my fellow recipients achieve our goals. Those who see this post might at first see it as a boast about meeting a local celebrity, but it's so much more than that. Mr. and Mrs. Saban, and all of this university, we are about more than football. We are about kindness; we are about generosity; we are about community. We are UA. #nicksaban #terrysaban #universityofalabama #ua

Nick Saban met Terry at a science camp in the seventh grade, and romance soon blossomed between the two.

The couple got married in December 1971 when Nick Saban was still studying at Kent State University. They have two adopted kids named Nicholas and Kristen Saban.

Terry Saban has a big influence on Nick Saban’s football coaching career, and he often talks about her support.

In a recent press conference, Saban spoke about his wife’s support and said, “Well, I think that’s the thing you have to have appreciation for.”

He went on to say, “Sometimes when … you go through the struggles that you go through, personally and professionally. And to have a partner that has been supportive and an asset to the organization in every way is something that is really appreciated. She’s been a great partner. I don’t know why she puts up with me, but I’m very fortunate!”

We are sure Terry Saban was on the sidelines cheering on her husband’s team during Monday night’s game. After their epic comeback victory, we won’t be surprised if Miss Terry really is Alabama’s lucky charm!