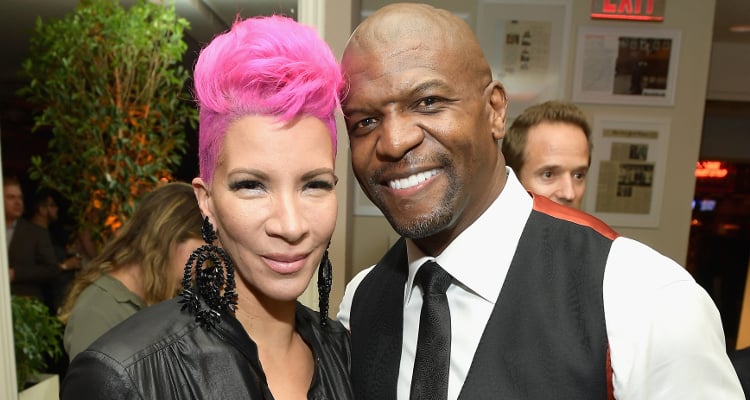 Known for his quirky sense of humor, Brooklyn Nine-Nine actor Terry Crews has come out with some serious news. On Twitter, the actor wrote about how the Harvey Weinstein case gave him “PTSD” because a similar thing happened to him in front of his wife, Rebecca King-Crews. Who is the woman behind this loveable funny man? Read on for more about Terry Crews’ wife, right here in our Rebecca King-Crews wiki.

More and more women are coming forward with sexual harassment allegations in the wake of the Harvey Weinstein controversy. Angelina Jolie, Gwyneth Paltrow, and Mira Sorvino, and more have all spoken out about their horrible experiences with the producer. But now, Terry Crews is making headlines because he has admitted that he, too, has been sexually assaulted by a Hollywood exec in the past, and it happened in front of his wife! Since then, many have become curious to learn more about her. Here’s what you need to know about Terry Crews’ wife, Rebecca King-Crews in light of the actor’s recent revelation.

Rebecca King-Crews Had a Traumatic Childhood

Born on December 24, 1965, in Michigan, Rebecca King-Crews’ age is 51. After the death of her father, Jack Winston Lund, she took to Instagram to announce and reveal that he “wounded” and “abused” her as a result of his drinking problem. Her problems ended when she left home at 17, but her post also had words of love and forgiveness for her father.

Just lost my dad… He was a good man… But he also had troubles…. he drank… he wounded us… he even abused us… but along time ago, when God first saved me… he taught me that the first lesson in life is to love your enemies and pray for them to despitefully use you…. that in doing so you are setting yourself free. I was only 17, but I knew God said I had to forgive, so I did. Let them go. God is Judge. He sees all, He forgives all…. RIP Jack Winston Lund. ???


Rebecca King-Crews is still recognized from her beauty pageant days, when she became Miss Gary, Indiana in 1984. When she was younger, she wanted to become a movie star, and at 19, she was already on her way with a crown on her head!

Throw back Thurday! Me as MISS GARY 1984 at the Miss Indiana Pageant in Michigan City, IN! On my right, one of 1st AAF Winners, Teri Shulz!

Gospel Singing and Music Were Her Hidden Talents

Rebecca King-Crews began singing and writing Gospel songs, that are well-known for being inspiring and soulful, with relatable lyrics. She performed with a group called The Chosen Ones and honed her craft while studying at Western Michigan University, where she met her husband. She performed in a lot of musical-theater productions, including “The Music Man” and “Evita.”

Terry Crews and Rebecca Crews came to be known as a power couple who have stood by each other since 1990. A year before meeting her future husband, she had a daughter, Naomi, with a man named Charles Burton. Terry and Rebecca Crews’ kids are Azriel, Tera, Wynfrey, and Isaiah. They also have a grandchild, as Naomi is now a mother. With a big family and an even bigger heart, Rebecca Crews is raising a good family, and handling the success that comes with her and her husband’s name.

Had an amazing time at Marvel universe live with the Fam! Great live show for the kids!

The Harvey Weinstein case is getting uglier by the day, and the list of people coming forward has only increased. Angelina Jolie said in an e-mail, “I had a bad experience with Harvey Weinstein in my youth, and as a result, chose never to work with him again and warn others when they did. This behavior towards women in any field, any country is unacceptable.” The current situation in Hollywood has turned sour. And now, in reference to the Harvey Weinstein scandal, the NFL star stepped forward about a similar situation he once experienced.

Terry and Rebecca Crews were at an event when the actor said he was “groped” by a Hollywood exec. “Jumping back I said, ‘What are you doing?!’” explained Crews. His wife even witnessed the whole thing go down, and they looked at him like he was crazy. According to Crews, the unnamed individual “just grinned like a jerk.”

Though he confronted the person and wanted to “kick his ass,” the actor feared the aftermath of what his actions might cause, and decided against it. “’240 lbs. Black Man stomps out Hollywood Honcho’ would be the headline the next day. Only I probably wouldn’t have been able to read it because I WOULD HAVE BEEN IN JAIL. So we left,” explained Crews.

Hopefully, me coming forward with my story will deter a predator and encourage someone who feels hopeless. (16/end)

Although there are no details about how much Rebecca Crews earns, we do know that her husband is estimated to be worth a whopping $20.0 million. The comedian, actor, and former NFL player made his money through his hard work at all of his endeavors. You can currently see him on Brooklyn Nine-Nine, or check out his films like Blended and The Expendables.  Rebecca Crews’ movies and TV shows include The Family Crews, E! True Hollywood Story and The Mo’Nique Show.