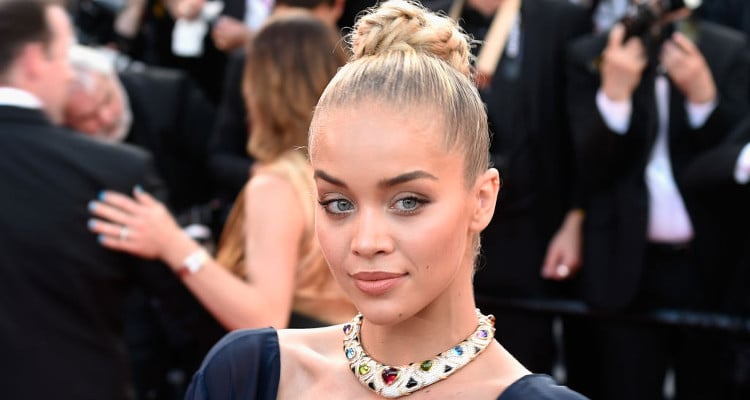 Jasmine Sanders’ career is riding high with her modeling and acting with equal ease. Known as “Golden Barbie” by her fans and friends, Sanders is going steady with her boyfriend, Terrence J, and hanging out with pals like Kim Kardashian and Kylie Jenner.

Jasmine Sanders is one of those women who seems to have it all. A successful modeling career, a bunch of glamorous friends, a music industry businessman who simply adores her, and not to forget three loving French bulldogs! Just when we thought things could not get better for her, Terrence J’s girlfriend set the bar higher by doing a campaign called “Bridging the Gap” for Gap, along with a cast of well-known stars. Jasmine Sanders and Terrence J are an “it” couples in Hollywood and reportedly going strong. Keep reading for some details from Jasmine Sanders’ wiki.

Born on June 22, 1991, in Frankenthal, Germany, Jasmine Sanders’ age is 26. Though she was born in Germany, Sanders was raised in South Carolina. She has a sister named Alisha whom she is very close with. Sanders is also known as “Golden Barbie” and is a successful model, actress, and social media personality. She came up with the name of the Golden Barbie handle by combining her childhood nicknames, Goldilocks and Barbie. Sanders modeled for brands like Ralph Lauren, Nike, Smashbox, as well as American Eagle, and magazines like Seventeen, and Glamour. She walked the runway for Moschino, Miu Miu, and designers like Jeremy Scott. If there is one thing she is never short of, it is self-confidence as she has been modeling from the young age of 13.

Sanders became popular for her role as Jasmine in the film School Dance in 2014, which led to future roles in Smooth Talking Sexy Hair and Glosses. Sanders also appeared in ads for Moroccanoil’s new curl line, and is the company’s curl ambassador. She is good friends with reality TV stars Kim Kardashian and Kylie Jenner, and is known to be loyal to her friends and stand up for them. In fact, when Kardashian was robbed at gunpoint in Paris last year, Sanders rushed over after hearing about it to be there for her friend.

Living Life to the Fullest

Fans looking for Jasmine Sanders’ hot pics must check out her social media accounts. Jasmine Sanders’ Instagram account is full of pics of her in sexy outfits, with her friends modeling, walking the runway, shopping, and eating gourmet food. She is a great example of being young, having fun, and doing it all over again when morning comes. With an estimated net worth of $1.5 million and a loving boyfriend by her side, Sanders is having the time of her life!